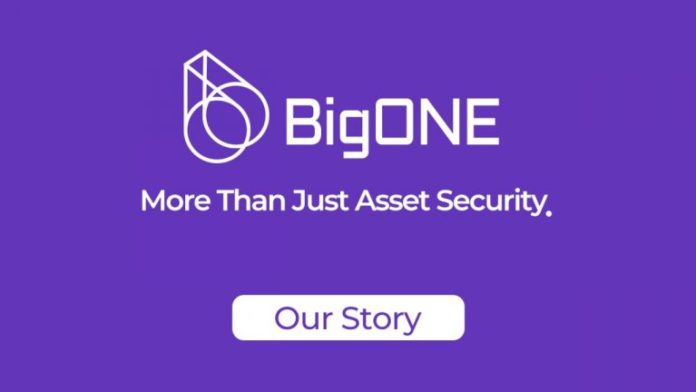 At BigONE, security is not a choice. Everyday, the exchange deploys top-notch technologies and security measures to safeguard the safety of its users’ digital assets. In fact, since founded in 2017, BigONE has never lost even a single token of our users’ assets, which is actually a world record when writing this article.

BigONE’s core team has five years experience in managing cryptocurrency trading platforms and is equipped with seasoned expertise in sourcing digital assets. BigONE fully upholds the spirit of blockchain, cultivates token ONE Ecosystem, and advocates for the sharing of the exchange’s profit and benefits with all BigONE users. BigOEN firmly believes that blockchain can change the future for the better, and strives to become the gateway to blockchain across the globe.

BigONE has inherited great resources from Yunbi.com, the precursor of BigONE. The team was the first ever in the world to have discovered premium blockchain projects such as ETH, NEO, QTUM, SC, and EOS, the last of which launched its first ever IEO on Yunbi. Ever since EOS came into existence, BigONE has been facilitating the development and prosperity of the EOS ecosystem. BigONE not only supports almost all of the EOS Candy airdrops, but also opens relevant trading pairs in a quick manner.

While growing with its users, BigONE has cultivated its own features.

For instance, BigONE has enabled the slider verification code for human-machine identification, and has an anti-phishing reminder to prevent users from being phished, not to mention the security team’s manual checkup when something suspicious happens during the login process.

Depositing and Withdrawing Security: The security was integrated with the SlowMist AML system, and when something unusual happens, BigONE’s real human security team will manually check it up.

Permission Security: The GCP platform account is bound to the G Suite account, and all permissions can be rescinded by disabling the company mailbox. Without this security measure, millions of tokens were stolen by former employees of some other well-known exchanges not long ago.

Server Security: All services are managed and maintained on k8s.

Private Key Security Service and Management: All private keys and passwords are managed through the secret mechanism of k8s, and injected into the runtime environment of the program in the form of environment variables. The update of the secret is the responsibility of a dedicated person, and the engineer can only quote it, not the plaintext.

Private Key Security: Both Hot Wallet and Cold Wallet deploy secure random number methods to generate private key and master key, and use a high-strength algorithm to encrypt storage. All sensitive information is in the memory and erased immediately after use.

Do Nothing despicable: Ever since BigONE was founded, the company upholds the moral principle of “do nothing despicable”, and sticks to it through everyday’s operation. What sets BigONE apart is that it never ever manipulates the market or sets up a secretive system to take advantage of its users. BigONE users trade fair and square, as does BigONE.

High performance. The underlying transaction architecture uses PXN professional matching engine, supporting high concurrent access. Thanks to years of technology accumulation, BigONE has substantially brought its interface and trading experience to a next level, and catered to global users with more stable technology and localization.

By and large, BigONE is designed to solve traders’ imperative needs in response to the security hackings that were undermining other bitcoin trading platforms. Its unprecedented security, world-class products, and uncommonly business ethics are things that very few exchanges have, but everyone covets.

Bitcoin Exchange Balances are Down $3 Billion from Mid-March; What This Could Mean

Bitcoin has entered a firm bout of sideways trading as it struggles to garner any notable near-term momentum This comes...