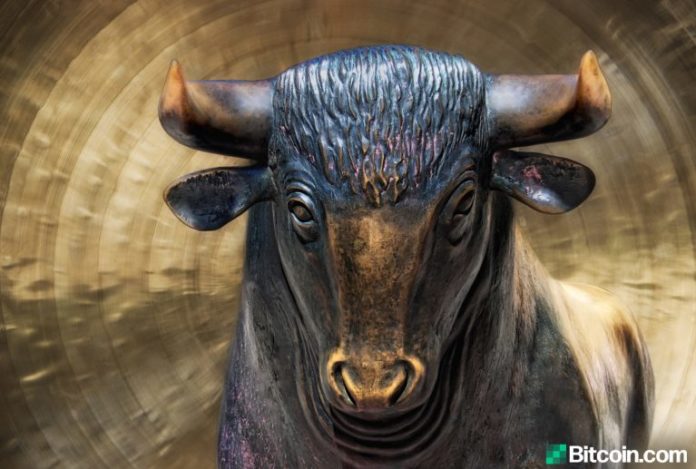 Cryptocurrencies have gained significant value over the last few weeks and it’s causing exuberance among digital currency proponents. Now a number of traders and influencers believe bitcoin and other coins are in bullish territory. Despite the surge to $13K last July and the deep pullback that followed, BTC investors and influencers have no issue believing that crypto is on the threshold of another bull market.

‘Calling the Bull’ Is a Bold Move, But a Number of People Are Doing So After BTC Surpasses $10K

Bitcoin traders, analysts, and thought leaders on social media and forums seem to think that the crypto market is facing another bull run. Statements about a “bull market” and a possible “altcoin season” are littered all over Twitter and news articles about the cryptoconomy’s swift rise. You can find a number of crypto influencers explaining that the bitcoin bull market is overdue for a variety of reasons.

Some people claim the reward halving is pushing BTC’s price up, they say miner capitulation is over, the BTC hashrate has touched an ATH, and most of the non-ideological investors capitulated. Moreover, lots of crypto investors are stressing that “this time is different” even though they know calling a bear or bull market requires judgment and is considered a bold call. But this hasn’t stopped a number of crypto’s influential figures from doing so.

“Early signs of a bull market,” explained @American_hodl on Wednesday. “I am finding myself explaining bitcoin to skeptics and new entrants again. This did not happen during the bear. During the bear, it was just us here.”

Last bull market, this is how fast #Bitcoin moved:

Now consider the fundamentals today vs 2017. The next bull run will be insane.

However, other people disagree with American_hodl and the others who assume the market has turned bullish. Some individuals have certain price points that need to be obtained until they call the bull. “We aren’t in a bull market until we close above $10.7k,” emphasized @llamamarket. “So I’m patient but it looks more likely I was wrong about $5k at least at this very moment. I’ll keep everyone posted if/when I buy.” The specific price point at which a bull market occurs has been a trend lately and the crypto influencer Luke Martin touched upon the subject on February 6, tweeting:

Anthony “Pomp” Pompliano, the well known cofounder of Morgan Creek Digital Assets has been talking about the bull run lately too. On Twitter, Pomp felt the need to give an “important message as we enter the next bitcoin bull market.” Pomp explained: “BTC is very volatile, you can lose all of your money, only invest what is ok to lose, Twitter is not investment advice, don’t buy BTC with credit cards, keep low time preference, [and] do your own research.” When BTC crossed the $10K zone, Pomp let his 309,000 Twitter followers know that he still thinks “bitcoin will hit $100,000 by end of December 2021.” In between all the social media and forum discussions about the bull market, a number of individuals say that “altcoin season or altseason” typically happens before the BTC bull market or comes in phases.

People underestimate how quickly Bitcoin will go from $20k to $50k and then $100k.

Most of the new people have never seen a full bull market. They have no idea how much Bitcoin will pump once it really gets going!

Managing partner at Blocktown Capital, Joseph Todaro, discussed the altseason topic and the next bull market on Wednesday. “This is the first altseason of the next bull market,” Todaro tweeted. “You only get 3 real altseasons: The early alt pump when bitcoin is still less than ATH (weak), the mid alt pump after bitcoin passes ATH ~$20k (strong), [and] the late alt pump as bitcoin marks cycle top (strong). Bitcoin just hit $10,000.” Todaro also quipped and said:

You know we are in a bull market when Peter Schiff refuses to tweet about bitcoin.

Despite knowing about the prior BTC price dump after July’s $13K high, bitcoiners everywhere are still calling the bull after the $10K position was reached. “Bitcoin is currently in an intense bull market and investors are getting excited,” another individual tweeted on Wednesday.

Disclaimer: This article is for informational purposes only. It is not an offer or solicitation of an offer to buy or sell, or a recommendation, endorsement, or sponsorship of any products, services, or companies. Bitcoin.com does not provide investment, tax, legal, or accounting advice. Price articles and market updates are intended for informational purposes only and should not be considered as trading advice. Neither Bitcoin.com nor the author is responsible for any losses or gains, as the ultimate decision to conduct a trade is made by the reader. Always remember that only those in possession of the private keys are in control of the “money.”

Coinbase CEO Gets Payment Blocked By US Bank, Crypto Fixes This