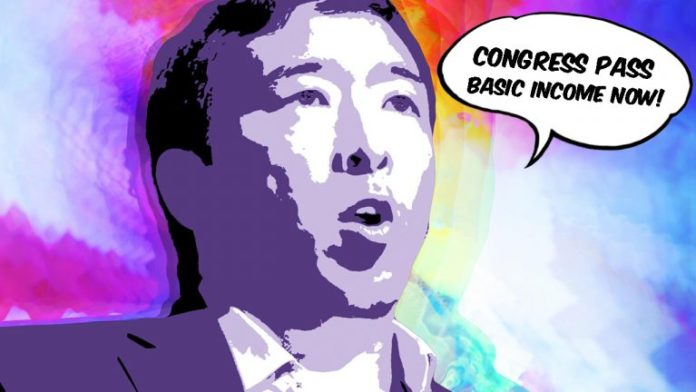 While most of the U.S. remains on lockdown, a few states across the nation are starting to open up businesses and lift restrictions. Meanwhile, politicians on the left have been trying to push a universal basic income (UBI) package through Congress, in order to give Americans in need a monthly check. This week, former U.S. Presidential candidate, Andrew Yang, got the #CongressPassUBI hashtag trending wildly on Twitter, as thousands of people tweeted the message.

Universal basic income (UBI) has been trending on Twitter lately, as the former candidate Andrew Yang got his followers to push the discussion on social media. The hashtag #CongressPassUBI started trending on Friday and continued throughout the day on Saturday. UBI is essentially a monthly paycheck from the government as long as you meet certain criteria. The recent UBI plans submitted by Democrat politicians, involve anywhere between $1,000 to $5,000 a month depending on the proposal. During the first 30 minutes Yang tweeted about UBI, nearly 10,000 people tweeted in response. A few hours later, the tweets were well over 40,000 posts about the topic of UBI, all showcasing the hashtag #CongressPassUBI. One person’s meme asked if people didn’t want the mob to eat the rich and said that passing a UBI program would “lead to us not eating the rich.”

Even if the lockdowns lifted tomorrow, the economic devastation will continue for years to come. We need to heal this country. We need to put money in regular Americans’ hands, right now. #CongressPassUBI pic.twitter.com/vO6uSCCsfu

Yang has been preaching about UBI for quite some time and the former candidate says the recent $1,200 per American checks are not enough. During a streaming video conversation, Yang told the host that he would like to see $2,000 a month payments sent to every American until Covid-19 ends. “When the house is on fire, you don’t worry that much about the water you’re using to put it out,” Yang stressed. “We have the equivalent of a $21 trillion fire on our hands, and we have to do everything we can to help people get through this.” Yang and many other U.S. politicians have been hooked on the economic concept called Modern Monetary Theory (MMT). For instance, with the help of MMT advocate Rohan Grey, Michigan Democrat Rashida Tlaib introduced a bill that would give Americans $2,000 per month. On April 14, three Democrat leaders Ro Khanna, Bernie Sanders, and Tim Ryan proposed legislation that would give $2,000 to every American. The catch with that specific bill, notes that the program would last until the current unemployment levels in the U.S. subside to pre-coronavirus levels.

However, most cryptocurrency supporters, gold bugs, and sound money advocates believe that UBI is a horrible plan that will keep unemployment levels the same and even make them rise. The biggest concern with UBI, from those who disagree with MMT, is that basic income would destroy the motivation to work and it could invoke millions of people to take advantage of the system.

The cost to implement a $2,000 per month UBI plan would be around $3.9 trillion per year. This money would stem from the Federal Reserve’s unlimited money creation scheme. UBI would also cause inequality because it would be impossible to cover everyone and there will always be individuals or groups who miss out on redistribution plans. Mises.org author, Antony Sammeroff, explains that the system would trust the current leaders would do good, even though they have defrauded the populace so many times in the past.

“Most people agree that politics is a dirty game and that political powers will inevitably be used to further the agenda of officeholders and their cronies,” Sammeroff details. “That said, despite being immersed in the current thinking regarding UBI for three years now, I have seen precious little worrying as to what the government — or a future government — might actually do once it has seized control over everyone’s purse strings. After all, these governments are composed of the same people who launched a permanent war in the Middle East, wasting trillions of dollars on destroying millions of lives. These governments bailed out the banks from the public purse and gave themselves raises after telling the rest of the nation we had to tighten our belts.” The Mises author further writes:

They have robbed the young of the opportunity to own a home by sending house prices through the roof and mean to leave them a nation in ruinous debt. They continue locking away huge numbers of people for decades for victimless crimes, leaving their children to be raised single-handed. They created an oligopoly of higher education provision forcing generations into student debt that cannot be defaulted on, and healthcare systems that are so restrictive that people must pay inordinate sums to get care or are otherwise forced onto government waiting lists so long that many of their conditions are chronic or untreatable before they are seen to.

In fact, the theories against UBI are astounding and there are many studies that show basic income would create even more wealth inequality and government corruption. Bitcoin advocates and free-market proponents believe that UBI is just another form of destructive Keynesian-styled communist idea. This is because UBI has stemmed from extreme left-leaning visionaries and the many experiments that have started derive from socialist regime-led countries. Mises author Lee Friday notes that people should “forget guaranteed income” and they should tell the “government to stop destroying income first.”

Not only that, but all of the prior UBI tests have failed miserably; like the experiment in the Italian city of Livorno, Ontario, Canada’s UBI trial, Namibia’s UBI, the test in Finland, Fife and Glasgow’s UBI schemes, and Alaska’s permanent fund have been widely considered “unsuccessful.” Moreover, all of these UBI trials indicated how harmful basic income can be because these tests have strengthened the bureaucracy and streamlined corrupt central planning systems. Despite Andrew Yang’s best intentions, UBI just might be the bait to hook a great majority of people into believing communism works and make them forget it has killed millions upon millions worldwide.

What do you think about Andrew Yang pushing for UBI discussions on Twitter? Let us know in the comments below.