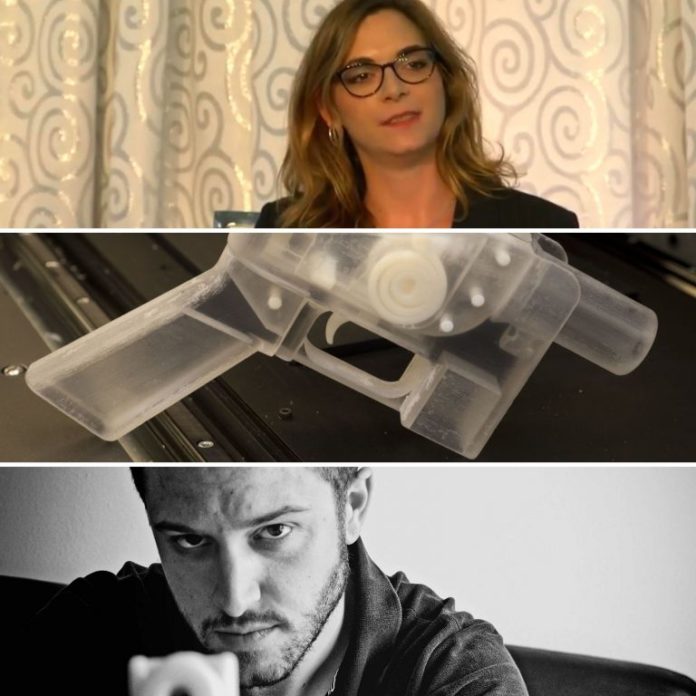 Cody Wilson, founder and Director of Defense Distributed (DD) has resigned, according to a press conference held Tuesday, September 25th in Austin, Texas. Paloma Heindorff, an operations executive with the company for three years, has been named Director. Mr. Wilson tendered his formal resignation Friday, September 21st in the wake of criminal allegations and charges unrelated to his work with DD and his advocacy for First and Second Amendment issues.

“My name is Paloma Heindorff,” DD’s new Director spoke in distinctly British English. Flanked by the company’s legal team, Ms. Heindorff tersely announced particulars, thanked her team for not missing a beat during their founder’s being charged, arrested, deported, arraigned, and released on bond to face criminal charges having nothing to do with their mission.

“I am extremely proud to say,” Ms. Heindorff continued, reading from prepared remarks, “that over the past few days, the entire team at defense distributed has recommitted to enabling the sharing and publication of CAD and 3D printed files. This resilience I truly believe to not only be characteristic of our company as a whole, but also the ideas that we have worked so hard to promote.”

Sterling Event Center in Austin, Texas is a campus of salons for joyous occasions, weddings, receptions. Tuesday morning, September 25th, it was a lot less than that, as four employees of the nonprofit Defense Distributed stood, wearing DD swag near a nondescript room’s entrance, awaiting a press conference called over the weekend. Reporters and associated media ambled about the room’s removable chairs, placing recording devices on a black clothed table.

Defense Distributed was founded summer of 2012 by Cody Wilson, a then University of Texas Law School student looking to make waves similar to that of Julian Assange and Wiki Leaks. Mr. Wilson and conspirators devised a Wiki Weapon of sorts, fashioning themselves as radicals set to marry the nascent Maker 3D printing movement with a kind of Second Amendment argument not previously heard. Within a year, the shot heard around world squeezed off, as Mr. Wilson had successfully printed and fired a single slug into dry air. As ever, the wry smile under dark sunglasses mugged for assembled cameras, rhetorically asking, “How’s that national conversation going?” Waves he for sure made, the toast of libertarian, anarchist, crypto circles the world over. A minor celebrity, his legend grew to near mythic proportions over half a decade. He even scored a book deal through a Simon & Schuster imprint.

Things have drastically changed. “Give me the liberty to know, to utter, and to argue freely according to conscience, above all liberties,” from Milton’s Areopagitica, written more than three centuries before DD came into existence, presumably remains the company’s guiding ethos. Ms. Heindorff assured questioners Mr. Wilson “going forward, at the moment, as it stands” has “no role in the company.”

Defense Distributed’s Mission Has Not Changed

More recently, Defense Distributed found itself under legal siege by state attorneys generals. They were miffed the Trump State Department settled a lawsuit brought by the company against being denied the ability to publish online 3D printable gun blueprints. Nearly two dozen US states, led by Washington state, were able to thwart DD’s newly procured license from the federal government to indeed publish in the above manner, securing an indefinite restraining order against the company.

Defense Distributed pivoted, and late last month announced a loophole outlined by the very order issued against the company: while they were not permitted to give the plans, blueprints, and files away for free online, there was, the judge conceded, nothing stopping DD from selling files and having them physically delivered. The order’s bluff was called, and by August 28th, Defense Distributed began offering files for a suggested donation of $10. It was a widely praised and vilified workaround, and all that really remained was to fight the barrage of cases tying up broader speech issues. Distributing the files had been settled. Paloma Heindorff confirmed close to $400,000 has been raised for its legal defense, along with how none that money will be used in their former Director’s criminal proceedings. She was also careful to insist business had only dropped off a slight amount since allegations surfaced, and how not one employee had missed work during the events of last week.

“We believe in something,” she answered further, “and that something is not one man; it is an idea.” She acknowledged having exactly no background in firearms. She has mostly worked as a creative in spoken word and poetry circles in London and New York before joining DD in Austin three years ago, hoping to be part of “the most elegant activism I had ever seen performed.” The company will remain full speed ahead, having produced a CNC home milling machine to fabricate firearm parts, Ghost Gunner. Defense Distributed had a backlog of orders going on a year wait. They’ve managed to cut that in half, she said, but saw no reason why they wouldn’t be able to ship them on demand by the end of 2018. “I’m a different person,” she insisted, “I am not trying to replace him as a character. That’s not my aim.”

“You rock Paloma!” came an impromptu shout from the curiously quiet crowd. Smiling as she stood to leave, Ms. Heindorff offered a polite “Thank you,” and exited.

Do you support the work of Defense Distributed? Let us know in the comments below.

Tech giant Dell EMC Technologies plans to remain a leader in the Indian server market by introducing products that have...