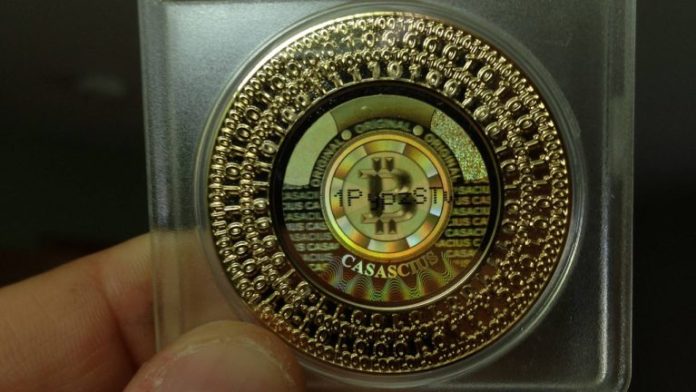 For many years now physical bitcoins have been a very popular trend, but one specific type called the Casascius physical bitcoin collection has intrigued people for years. Last December, someone redeemed a 100 BTC Casascius bar and since then 560 Casascius coins worth $5.1 million have been redeemed. As of today, there are only 20,901 Casascius coins or bars left in the world, with roughly $424 million worth of bitcoins loaded on them.

Bitcoin’s believe it or not can have nostalgic value, especially when they are tethered to a physical bitcoin. During the last decade, numerous manufacturers have created physical bitcoins that have been loaded with the digital currency.

Most all of these types of coins are collector’s items, as the physical attributes can give the cryptocurrency numismatic value. One of the most popular physical bitcoin creators was Mike Caldwell who issued the Casascius physical bitcoin collection from 2011 to 2013.

Unfortunately, the U.S. government shut down Caldwell’s operation by telling him he could no longer load the physical coins with real digital bitcoin. However, during Caldwell’s tenure of making the Casascius physical bitcoin collection, he minted close to 90,000 BTC in various denominations.

Last December when news.Bitcoin.com reported on the 100 BTC gold bar that was redeemed on the 23rd, it was the last 100 BTC peeled since then. So far the highest increment peeled between December and now, was a few 25 BTC coins. At the time of writing, there are still 48- 100 BTC bars that have not been spent, leaving $44.4 million left (100 BTC bars) unspent to-date.

Although some individuals are lucky enough to own the series one 1,000 BTC Casascius coins minted in 2011. Only six were manufactured and there are four coins left, and that means only 33.33% of the BTC has been spent so far. It could be possible that due to the size of these coins being much smaller (28.6mm) than the bars (80mm x 40mm x 6mm), a few may have been lost.

In the Casascius collection, there are a lot more physical coins with smaller increments between 0.5 BTC to 25 BTC. As mentioned above, Casascius coins have given bitcoiners a lot of nostalgia, and lots of these coins have gathered numismatic value that far exceeds the BTC value stored on the coin.

There are not that many Casascius coins on eBay, but there’s a whole lot more coins from manufacturers like Denarium and BTCC Mint. Caldwell did make a number of unloaded Casascius bitcoins that contain no real digital currency value, and those trinkets sell for $25 a pop.

People can follow the redemption cycle of Casascius bitcoins on Twitter by following the bot called Casascius Coin Tracker (@Casasciusbot). When news.Bitcoin.com reported on the 100 BTC bar peel, it was the largest month between now and then for redemptions with 172 coins peeled. In mid-March 54 coins were redeemed and so far only 14 Casascius coins have been peeled in July.

Of course, the biggest month in a long while was December 2017, when the public witnessed 1,172 redeemed Casascius coins. As 560 Casascius coins worth $5.1 million have been redeemed since December 2019, it shows that these physical bitcoins are becoming rarer by the day. It’s likely that as scarcity continues to take hold of these loaded physical bitcoins, they will always be worth more than the original digital load value.