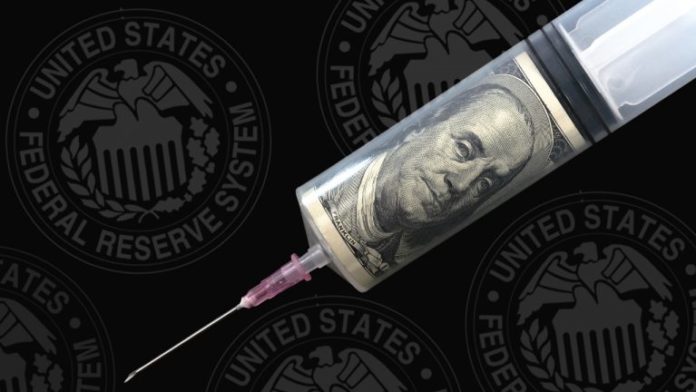 Since September 2019, research shows the Federal Reserve has pumped over $9 trillion to primary dealers by leveraging enormous emergency repo operations. A recently published investigative report shows the U.S. central bank submits the daily loan tally, but the Fed will not provide the public with information concerning the recipients. Estimates say, in 2020 alone, the U.S. has created 22% of all the USD issued since the birth of the nation.

The U.S. Federal Reserve has printed massive amounts of funds in 2020 and bailed out Wall Street special interests during the last seven months. On October 3, 2020, Redditors from the subreddit r/btc shared a video called “Is Hyperinflation Coming?” and discussed how the U.S. central bank has created 22% of all the USD ever printed this year alone.

“The U.S. dollar has been around for over 200 years and for the bulk of that time, it was backed by gold,” one Reddit user wrote on Saturday. He added:

Having a quarter of all USD printed in a single year is more than alarming, it’s mind-blowing.

Additionally, on October 1, 2020, Wall Street on Parade’s (WSP) Pam Martens and Russ Martens published a comprehensive report on how the U.S. central bank pumped out “more than $9 trillion in bailouts since September.” The findings show that the Fed is also getting market advice from Wall Street hedge funds like Frontpoint. The hedge fund Frontpoint Partners is a controversial firm because it shorted the subprime mortgage market during the 2007 to 2010 financial crisis.

The latest WSP analysis shows that the Fed has been “conducting meetings with hedge funds” like Frontpoint in order to get the financial institution’s “input on the markets.” In 2007 to 2010, the Fed was leading a group of lending facilities and once again the central bank is working with three major emergency lending facilities: the Money Market Mutual Fund Liquidity Facility; the Primary Dealer Credit Facility; and the Commercial Paper Funding Facility.

“On top of those facilities, beginning on September 17, 2019 – months before the first case of Covid-19 was reported in the United States – the New York Fed embarked on a massive emergency repo loan operation, which had reached $6 trillion cumulatively in loans by January 6,” the WSP findings detail. The Martens’ also state:

The Fed has provided data on the total amounts of the daily loans, but not the names of the recipients. All it will say is that the loans are going to its 24 primary dealers, which are the trading units of the big banks on Wall Street. The last time we tallied its data in March, it had sluiced over $9 trillion cumulatively to these trading houses.

A number of people believe that the massive creation of money stemming from the Fed will eventually cause hyperinflation. The dollar has lost considerable value since the introduction of the central bank in 1913. For instance, the cumulative rate of inflation since 1913 is around 2,525.4%. This means a product purchased for $1 in 1913 would cost $26.25 in October 2020.

“The United States printed more money in June than in the first two centuries after its founding,” Morehead wrote in a letter to investors. “Last month the U.S. budget deficit — $864 billion — was larger than the total debt incurred from 1776 through the end of 1979.”

On the same day Pantera Capital published the letter called “Two Centuries Of Debt In One Month,” the 22-year congressional veteran, Ron Paul, told the public that Americans should be “prepared.”

Paul has exposed the U.S. Federal Reserve for the last two decades and has written extensively about the central bank’s fraud. In the video, the former congressional leader said the medical community, U.S. bureaucrats, and the Fed have done things he never expected.

“After so many years in Washington, I thought I was immune to being shocked by what our government does,” Paul detailed. “But the actions that our elected officials… the Fed… even the medical community have taken in the past few weeks have gone beyond anything I could have imagined.”

“Most Americans will be blindsided by what’s going to happen. Make sure you, your family, and anyone you care about are prepared,” the former U.S. Presidential candidate insisted.

What do you think about the $9 trillion the Fed pumped into the hands of Wall Street since September? Let us know what you think in the comments below.

Ethereum has been closely tracking Bitcoin’s price action throughout the past several days and weeks This has primarily caused it...