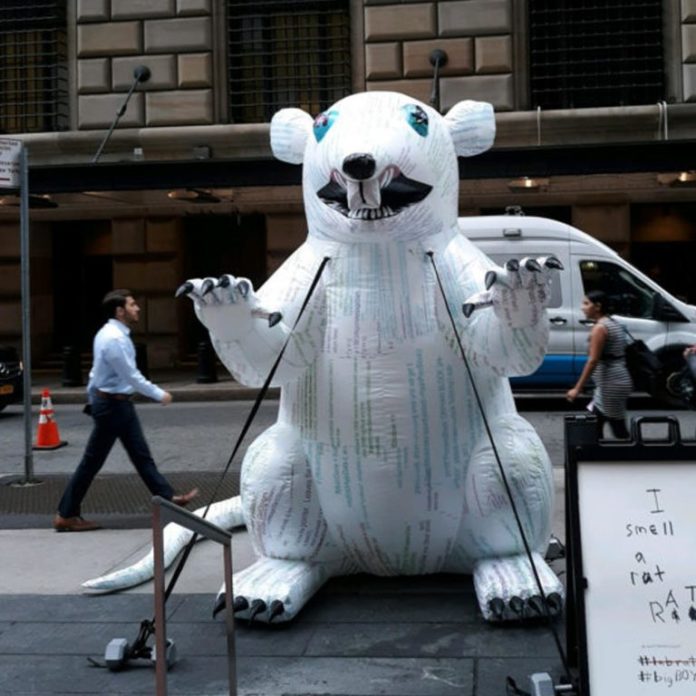 Ten years after the financial crisis of 2008, an artist known as Nelson Saiers has placed his latest artwork across the street from the New York Federal Reserve building in the financial district. The piece is a giant sized and menacing-looking inflatable rat covered in Bitcoin code. The former Wall Street hedge fund manager and mathematician dedicates most of his time these days to his artisan loft where he produces visuals depicting the broken financial system.

A Visual Perspective of Finance and Art

There’s some new street art located across the street from the New York Federal Reserve building that’s been causing some attention. A tall balloon-like white rat covered in bitcoin code is tied to the ground looking like it’s about to attack the structure. Nelson Saiers devotes his energy to artistic pieces that shine a light on the traditional finance system we deal with today. Saiers financial artwork has made headlines over the years after he left his trading position in 2014.

The 8 ft white rat covered in Bitcoin code staged across the street from the central banker’s lair represents an interesting time in history, because it is ten years after the 2008 financial crisis. Additionally, Oct. 31, 2018, marks the tenth anniversary of the Bitcoin white paper published by Satoshi Nakamoto. The inflatable white rat’s creator, who is also known as the “Warhol of Wall Street,” explained in an interview on Oct. 9 with Shreyas Chari his latest artwork does give a representation of these anniversary dates.

“So this piece is slightly different from the inflatable rats you see around the city. It’s loaded with Bitcoin code and a couple related equations,” explained Saiers during the interview.

About ten years ago, while TARP was bailing out the economy, Satoshi Nakamoto wrote this code along with the words; ‘03 Jan 2009 The Times, Chancellor on brink of second bailout for banks,’ referencing the equivalent in England — Satoshi seemed pretty opposed to centralization and said it was doomed in the end. I wanted to be true to his views and reflect this in the artwork.

The Infestation of Sewer Rats

Over the last two decades, street art depicting the world’s financial inequalities has become a significant movement globally. The prominent and controversial street artist Banksy has brought the art-form to a new height and the use of rats can be seen on lots of walls covered in graffiti throughout the past two decades.

Banksy himself said the rat is something to look up to because these animals do whatever they want. “If you feel dirty, insignificant or unloved, then rats are a good role model. They exist without permission, they have no respect for the hierarchy of society,” the artist explains in his writings. The innovation of cryptocurrency itself has been depicted as an uncaring ‘honey badger of money’ or anarchistic street rat many times over the years.

In 2016 the computer scientist Andreas Antonopoulos referred to the Bitcoin protocol as a “sewer rat of currencies.”

“Bitcoin isn’t living in a bubble — Bitcoin is a sewer rat,” Antonopoulos detailed during his speech. “It’s missing a leg. Its snout was badly mangled in an accident last year. It’s not allergic to anything — In fact, it’s probably got a couple of strains of bubonic plague on it which it treats like a common cold. You have a system that is antifragile and dynamic and robust.”

Over the last two years or so Bitcoin and street art have melded together and many artists have been using the cryptocurrency for symbolism on walls. In Paris, France there’s an artist named Pascal Boyart aka “Pboy,” who leaves his cryptocurrency themed art and QR code on buildings throughout the city. The artist Cryptograffiti has made a name for himself as he spreads his Bitcoin-infused art across various cities within the US.

Saiers latest artwork and the many other artists located around the world shows there’s a growing trend of mixing visually entertaining financial and political symbolism with cryptocurrencies. The artist’s Bitcoin rat, however, is not permanent and Saiers has plans to remove the inflatable after the display.

The annual Hurun China Rich List, a catalogue of individuals in the country with a net worth over 2 billion...