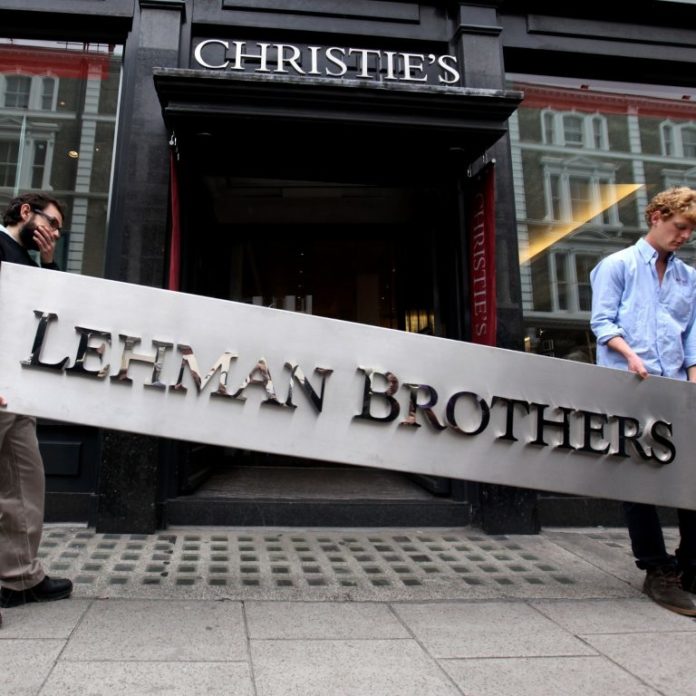 September 15, 2018 brings the post-industrial financial world to a ten-year milestone. Lehman Brothers Holdings Inc. was officially shuttered on this day in 2008, rocking the entire planet. The event occurred just 110 days before a revolution its collapse helped to spawn: Bitcoin. A little-known economic philosopher, Ludwig von Mises, tried to warn many years ahead about the perils of allowing politicians to issue and steer money.

Investment banks successfully captured levers of government regulation, both sectors preying upon the need for housing, and together they created a moral hazard, leading to what is known as malinvestment, as predicted by a cranky, marginalized mid 20th century economist, Ludwig von Mises.

This is what happens when governments control money.

The phenomenon may have also helped hasten Satoshi Nakamoto’s white paper to be made flesh, as in early January of the following year, the Bitcoin network mined its first block. While the cryptocurrency phenomenon was founded in direct opposition to Wall Street and its finance system, what a difference ten years has made. Almost all happy talk the community engages in at present can be categorized as Wall Street worship: crypto enthusiasts now work to be absorbed into the very system predecessors once despised.

Known as the Dean of the Austrian School of Economics, Ludwig von Mises (1881-1973) wrote in his magnum opus Human Action, “A lowering of the gross market rate of interest as brought about by credit expansion always has the effect of making some projects appear profitable which did not appear so before…It necessarily brings about a structure of investment and production activities which is at variance with the real supply of capital goods and must finally collapse.”

And by September 15th, 2008, ten years ago to the day, Misesean analysis worked its unforgiving way through Lehman Brothers investment bank, giving to dreary picturesque scenes of employees carting their belongings out of a shuttered building. The pre-Civil War American institution, fourth largest of its kind in the US, was under Chapter 11 liquidation bankruptcy orders. Not even the federal government could help it. When the dust finally settled, the bank was broken up between financial ghouls, vultures such as Barclays (itself over three centuries old) of the UK and Japan’s Nomura Holdings Inc. (the baby of the group at slightly less than 100 years), for pennies on the dollar.

To pound home the point further still, and it’s worth quoting at length, Mises argues a half century before history reveals him as an economic sage, “However conditions may be, it is certain that no manipulations of the banks can provide the economic system with capital goods. What is needed for a sound expansion of production is additional capital goods, not money or fiduciary media. The boom is built on the sands of banknotes and deposits. It must collapse.”

Lehman, to be fair, was more a broader symptom than true cause. Lehman Weekend, as it became known, was then the largest bankruptcy in its country’s history, testimony to the institution’s influence politically and in the financial world. The 2000s were a culmination of decades-long agitation by American progressives to fit everyone with a house, a home, ownership, and what would amount to a mortgage.

A romantic idea insured and backed by the imprimatur of the US government, it helps explain just why, why indeed, banks would ultimately loan to folks who could not repay. As a matter of basic logic, one must grant the business of modern fractional reserve banking is to make loans, selling money, and to then profit on the difference in interest rates, a classic model.

That any of those loans, never mind a sizable chunk or even a majority, would be bad or “subprime,” below standard, must have some kind of backdoor guarantee. Someone must signal a willingness to cover markers should they be called. That someone was the US federal government through a variety of exotic insurance and incentive policy programs.

Lessons the Current Bitcoin World Would Do Well to Heed

As Mises divined so many years ago, it all starts out really great, helping first movers, those who grab the filthy lucre in the beginning. “The final outcome of the credit expansion is general impoverishment,” he continued in Chapter 20 of Human Action.

“Some people may have increased their wealth; they did not let their reasoning be obfuscated by the mass hysteria, and took advantage in time of the opportunities offered by the mobility of the individual investor. Other individuals and groups of individuals may have been favored, without any initiative of their own, by the mere time lag between the rise in the prices of the goods they sell and those they buy. But the immense majority must foot the bill for the malinvestments and the overconsumption of the boom episode,” he warned. “The root problem with conventional currency,” a signed post as Satoshi Nakamoto appeared early February of 2009, echoing Mises of yore, “is all the trust that’s required to make it work. The central bank must be trusted not to debase the currency, but the history of fiat currencies is full of breaches of that trust. Banks must be trusted to hold our money and transfer it electronically, but they lend it out in waves of credit bubbles with barely a fraction in reserve. We have to trust them with our privacy, trust them not to let identity thieves drain our accounts. Their massive overhead costs make micropayments impossible.”

Governments have simply inflated their way out, potentially setting up yet another bust began by cowardly politicians. It doesn’t help matters when enthusiasts too have lost their philosophical fastball, choosing to snuggle up to Wall Street. One doesn’t need to be an obnoxious, bongo-playing Occupy hippy to guess mainstreaming in such a way could doom the entire point of crypto’s promising future. “I’ve developed a new open source P2P e-cash system called Bitcoin. It’s completely decentralized, with no central server or trusted parties, because everything is based on crypto proof instead of trust. Give it a try,” Satoshi Nakamoto asked almost ten years ago. Today, that casual request reads like a rallying call to arms.

What are the lessons, if any, you believe can be learned from the Lehman scandal? Let us know in the comment section below.

Disclaimer: The views and opinions expressed in this article are those of the authors and do not necessarily reflect the official policy or position of Bitcoin.com. The web portal and firm Bitcoin.com is not responsible for or liable for any content, accuracy or quality within the Op-ed article. Readers should do their own due diligence before taking any actions related to the content. Bitcoin.com is not responsible, directly or indirectly, for any damage or loss caused or alleged to be caused by or in connection with the use of or reliance on any information in this Op-ed article.