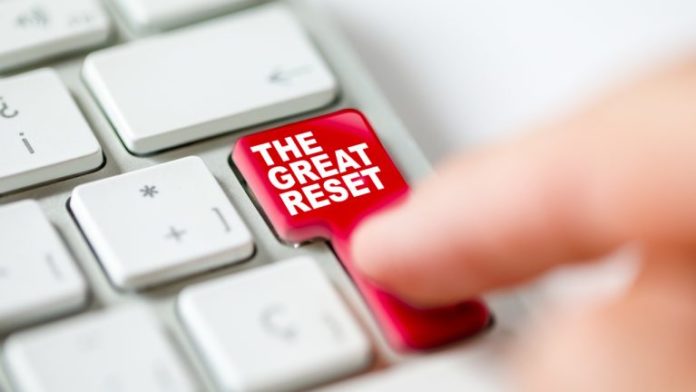 Less than two weeks ago, the International Monetary Fund (IMF) managing director called for a “new Bretton Woods moment.” Meanwhile, the IMF is not the only entity pushing for a “great reset,” as the World Economic Forum (WEF) and other mainstream entities have been promoting the financial reboot propaganda.

The Status Quo Preps for the ‘Great Reset’ Via Intense Propaganda

2020 has been a wild ride and during the last ten months, the world moved in lockstep in order to avoid the coronavirus outbreak. The government’s reaction to Covid-19 created a different world and the global economy has seen better days. During our last report concerning the IMF’s call for a “new Bretton Woods moment,” news.Bitcoin.com’s findings discovered some of the “great reset” doctrines. The great reset concept is very similar to George Orwell’s famous dystopian novel 1984, and some believe the subject is a borderline ‘conspiracy theory.’

For instance, a website called greatreset.com has been floating around the web catching people’s attention this year. Additionally, a Youtube video published by the Corbett Report offers a guide to the so-called reboot. The great reset conversation is also quite topical and discussions can be found on many social media avenues like Twitter, Reddit, and Facebook.

Likewise, websites like the greatreset.com have sparked intense speculation about an upcoming financial reset where the global elite forcefully invoke the ‘fourth industrial revolution.’ The coronavirus measures coupled with purported climate change and statist propaganda are considered the primers of this great reset concept.

In fact, the World Economic Forum (WEF) has been promoting the concept for years, and back in November 2016, the WEF tweeted about eight predictions for the year 2030. The WEF predicts a world where, “You’ll own nothing, and you’ll be happy” and the short clip says that everyone will rent everything they need.

Ever since the #greatreset hashtag started trending again this week, people have also been responding to the 2016 WEF tweet. Today, the WEF website and its founder Klaus Schwab are still heavily promoting this idea.

“Do we aim to get back to where we were before, or should we take the opportunity to make society fairer, smarter and greener, and get humanity off the road to climate catastrophe – a ‘great reset’?” one of the WEF’s reboot editorials states. The editorial is the subject of Klaus Schwab’s book called: “Covid-19: The Great Reset.” The book describes how the virus disrupted both economic and social infrastructure and “what changes will be needed to create a more inclusive, resilient and sustainable world going forward.”

Moreover, the publication Time Magazine has dedicated a lot of time to get its readers to understand the great reset as well. Time has partnered with the WEF and hosts a whole section towards the reset ideas. Similar to the book and WEF’s stance, Time’s new collection of great reset editorials discuss topics like the coronavirus, climate change, and reimagining capitalism.

The cover of @TIME: the #GreatReset is coming. Swallow the pill, folks, for your own good. The #Davos aristocracy at @wef wants the best for you & is so kind to reset your lives in 2021. No need for democratic consultation, which would but slow down the process of your salvation. pic.twitter.com/U5cPH0URwY

The Time articles are also filled with equality boosterism and environmental destruction cues from the progressive left. Oddly enough, one editorial notes that some “segments of society” can’t “make this great leap for­ward” in regard to the great reset. However, the author says that “governments can rewrite the social con­tract to provide for as many as possible remains urgent and vital.”

Not everyone is too keen on the great reset concept, and there’s a number of hit pieces against the idea trending on the web. For a case in point, an editorial published by the publication, Winter Oak, calls the new trend Schwab’s “fascist reset.”

“This new fascism is today being advanced in the guise of global governance, biosecurity, the ‘New Normal,’ the ‘New Deal for Nature’ and the ‘Fourth Industrial Revolution,’” explains the Winter Oak article.

On Twitter, one of the authors of the “HPV Vaccine On Trial,” Eileen Iorio, told her 15,000 followers that the founder of the WEF “wants to take this unprecedented opportunity to ‘Reset’ the world.”

“#TheGreatReset was founded in Davos and you don’t get to vote on it. Climate Change policies will be the cover story. [Time Magazine] LOVES it,” she added.

“To paraphrase (Klaus Schwab) Covid-19 gives us a small window of opportunity for The Great Reset”. Economist Jonathan Davis

It is not a conspiracy, we either stand or fall.pic.twitter.com/IMncVrb7Pc

For quite some time now free-market advocates and Austrian economists have warned about the infectious political globalism spreading throughout the world. Meanwhile, central banks and politicians have been creating money out of thin air and feeding trillions to special interests.

Winter Oak says that Schwab’s agenda is based on his theory dubbed ‘stakeholder capitalism,’ which has a number of extremely fascist elements. In a stakeholder capitalist-based world, the private sector is tightly tethered to the government and “the notion that a firm focuses on meeting the needs of all its stakeholders: customers, employees, partners, the community, and society as a whole.”

The post A Look at the Fascist Agenda Behind the ‘Great Reset’ and the WEF’s Reboot Propaganda appeared first on Bitcoin News.