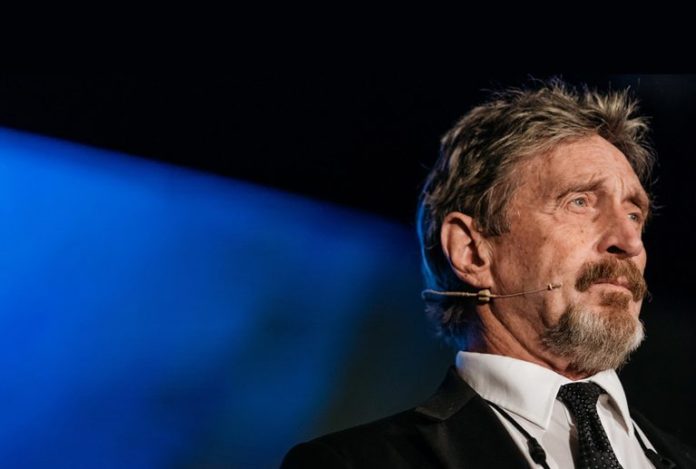 For a few weeks now, the former antivirus software tycoon John McAfee has said he is fleeing from the U.S. government for not paying his taxes. More recently McAfee’s been on a tweet tirade, speaking directly to his “pursuers” and telling them to leave him alone.

McAfee: ‘All I Wanted Was to Be Left Alone’

John McAfee is well known for starting a multi-billion dollar antivirus software corporation but he’s also known for his flamboyant personality over the years. McAfee’s recent troubles started during the beginning of the year when he tweeted to his 960,000 followers that he was now “living in exile.” He explained at the time that he was charged with felonies handed down by the Internal Revenue Service (IRS). McAfee stated on his boat that he and his wife Janice received notice from a grand jury for “various tax fraud issues.” “I have not paid taxes for eight years and I have made no secret of it,” McAfee told his fans. For a while, McAfee didn’t seem to have any issues traveling around the Caribbean islands with his crew and shared pictures and videos of himself living at sea. Then, during the second week of May, one of McAfee’s campaign staff explained that John was going offline in fear for his life and freedom. “Developing events have made it necessary for John McAfee to go dark — Please be advised that this account will be operated by staff until further notice,” the staff member announced. “More details will be released in time.” When McAfee returned online, he told his Twitter followers that he and his wife Janice were “safe and sound in their new backyard as defiant, joyful and free as ever.” Many people suspect that McAfee has been meandering around the Bahamas from various posts on social media. However, McAfee’s geo coordinates, at least according to Twitter, shows he and his crew have been traveling the Atlantic, stopping off in places like Cuba, Bermuda, and Venezuela. On June 9, a specific Twitter post from Cuba addressed to McAfee’s followers explained that his recent tweets are really for his pursuers.

“My recent tweets are less for you than they are for my pursuers. They are shots across the bow — Leave me the fuck alone, or go down with the corruption you have embraced, because I will fucking bury you if you continue,” McAfee boasted. “Doubt me at your own fucking risk.” The very next day McAfee stated:

All I wanted was to be left alone. I paid tens of millions of dollars in taxes and received only the condescension of Federal employees, when I needed services, in return. I chose to pay no more. This is my crime. You should have left me alone.

McAfee now claims that the Department of Justice is in the midst of compiling a claim against him for money-laundering, racketeering, and even murder. According to McAfee, the Bahamas Assistant Police Commissioner Paul Rolle is now after him as well. The cryptocurrency advocate emphasized on June 11 that Rolle is cooperating with a rogue CIA agent in order to “collect” him. However, McAfee has a backup plan in place and insisted that he has collected files on corruption in governments and for the first time plans on naming names and specifics.

“I’ll begin with a corrupt CIA agent and two Bahamian officials — If I’m arrested or disappear, 31+ terabytes of incriminating data will be released to the press,” McAfee informed his enemies.

McAfee’s story and recent tweet tirade can be dizzying, but he’s managed to bring to the table the discussion of why he and many others believe taxation is theft and can only be done with the use of force and coercion. All John McAfee wants is to keep his hard earned money. “My entire life has been fighting, and running from corruption,” McAfee said on Tuesday. “We are in a sunny tropical country, surrounded by ocean, singing, dancing and drinking Mojitos — Please do not extricate me from this.” Moreover, after having to “mud wrestle the Bahamian Police Commissioner along with dodging assassins,” McAfee launched a cryptocurrency trading platform called McAfee Magic.

The post After Fleeing From the US Government John McAfee Warns His Enemies appeared first on Bitcoin News.

12th June, Singapore, Singapore – Fast-growing cryptocurrency exchange BiKi.com has recently attracted yet another slew of investments, this time from...