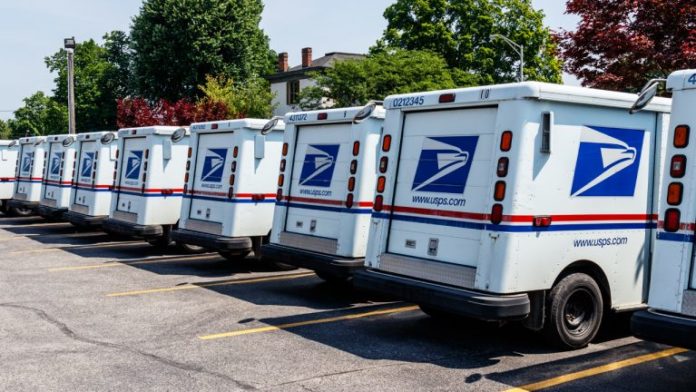 The United States Postal Service (USPS) is falling apart at the seams and many Americans are blaming the Trump administration. The USPS may have to deal with the U.S. election ballot process, as mail-in votes may be the dominant practice thanks to the coronavirus. Amid the American public’s concerned reaction about the internal problems at the USPS, on August 13, the postal entity published a patent for a blockchain-based mail-in voting system.

Every single day on social media and Reddit forums, users in the United States are discussing the United States Postal Service (USPS) and how the operation might be in ruins. Americans are beginning to realize on a nationwide scale that the USPS is financially broke and not sustainable.

On social media, U.S. citizens are sharing images of locked letter stations and mailboxes being carted away on flatbeds. The Trump administration’s Postmaster General Louis DeJoy also made a decision to remove hundreds of high-volume mail-processing machines nationwide outraging Democrats.

Many Americans are aware that mail-in voting most likely will be the most dominant method used this November during the U.S. 2020 Presidential Election. Trump has explained to the media on a number of occasions that it’s likely the voting process will go down in this manner.

DeJoy’s recent moves make some people believe that voter suppression is happening and a left-leaning direct action organization called “Shut Down D.C.” has organized a protest outside the Postmaster’s home.

Amid all the indignant complaints from Democrats, the USPS seems to be moving toward leveraging blockchain technology in a new mail-in voting patent published last Thursday. Even when the USPS was in better standards than it is today, voters complained that the mail-in voting system was riddled with manipulation.

This is due to the fact that investigations have found dogs and even dead people allegedly ‘voted’ in prior U.S. presidential elections. The patent published on the United States Patent and Trademark Office (USPTO) is called “The Secure Voting System.”

A voting system can use the security of blockchain and the mail to provide a reliable voting system. A registered voter receives a computer-readable code in the mail and confirms identity and confirms correct ballot information in an election. The system separates voter identification and votes to ensure vote anonymity, and stores votes on a distributed ledger in a blockchain.

The patent is 47 pages long and contains a myriad of diagrams detailing how the blockchain-based mail-in voting system would work theoretically.

“The security of a voting system can be increased by using the dependability and security of the United States Postal Service or similar entity,” the USPS patent details. “And this can be incorporated with a secure computer system using a blockchain or distributed ledger to ensure vote security and to prevent tampering or modification of electronic voting results.”

No one truly knows if the blockchain system can be implemented in time by the November election, but people do think that it is highly coincidental the USPS would publish this patent just a few months prior.

Postmaster General Louis DeJoy and the USPS could deploy a blockchain system if there is enough demand for it, but many believe it may be too late to deploy such a system.

DeJoy must appear before a hearing by the House Oversight Committee with the U.S. Postal Service Inspector General Tammy Whitcomb on September 17. The U.S. Sen. Elizabeth Warren (D-Mass.) and other Democrats created this hearing in order to address the USPS leader’s alleged internal problems.

Even the House Oversight Committee may not be enough, as it will happen only a few weeks before the U.S. election. This has invoked the Speaker of the House, Nancy Pelosi, and other House Democratic leaders, to call for an earlier meeting before September 17. Pelosi and other bureaucrats may attempt to meet this week in order to address the USPS issues.

A House Democratic aide told the newsdesk Axios that the Democrats perceive the current issues with the USPS a “crisis,” and the complaints mostly revolve around the handling of the mail-in vote scheme.

While Bitcoin has performed well in recent weeks, some altcoins have done even better. Take the example of Chainlink (LINK),...