It’s been a difficult few months for Tether. Questions surrounding the legitimacy of the token arose in the crypto community throughout 2017 as new USDT flooded into the crypto market; public struggles with banks led the world to wonder how it could be possible that so many new USDT coins could possibly be backed by ‘real-world’ fiat.

Additionally, Tether’s uncomfortably close relationship with the Bitfinex exchange has led to suspicions that illegitimate tokens may have had an all-too-easy route into the cryptosphere.  A December subpoena of the two companies, which share two high-ranking executive operators, raised even more eyebrows.

In order to understand why the legitimacy of Tether has come under fire so vehemently, we must understand how the currency functions in the first place.

Originally created in 2015 and initially branded as ‘Realcoin’, Tether is a cryptocurrency that is purportedly backed on a one-to-one ratio with USD and EUR (so for every Tether dollar or Tether Euro, the Tether company says that they keep one USD or one EUR in the bank.) Tether was created as a “stable coin,” one whose value is “anchored” to a fiat financial instrument and therefore is not subject to any volatility.

Tether’s primary purpose has been demonstrated as a vehicle for off-boarding and on-boarding onto exchanges–a way to stabilize digital assets without the hassle of converting crypto to fiat, a potentially costly process that requires a bit of technical know-how.

The New York Times reported Tether Limited, the company responsible for the creation of Tether, is based in the British Virgin Islands. Tether’s website says that it is “incorporated in Hong Kong with US offices in Santa Monica, CA and on the East Coast.”

Over the past several months, there’s been growing doubt as to whether or not Tether is actually backed by USD on a one-to-one basis. On its landing page, Tether writes that its ‘reserve holdings are published daily and subject to frequent professional audits. All tethers in circulation always match our reserves.’

(Not So) ’Frequent’ Audits

However, those ‘frequent’ audits have been anything but–an unofficial audit by mid-sized accounting firm Friedman LLP that started in May 2017 was not published until September 2017; the banks in which the accounts are supposedly held were blacked out of the report.

Eyebrows were raised further on January 27 of this year when Tether broke off its relationship with the auditors at Friedman LLP. In an official company announcement, Tether cited Friedman’s detailed methods as the reason for the split: “Given the excruciatingly detailed procedures Friedman was undertaking for the relatively simple balance sheet of Tether, it became clear that an audit would be unattainable in a reasonable time frame.”

The announcement continued to say that “as Tether is the first company in the space to undergo this process and pursue this level of transparency, there is no precedent set to guide the process nor any benchmark against which to measure its success.”

Controversy: Are Tether Tokens Really Tied to Fiat on a One-to-One Basis? 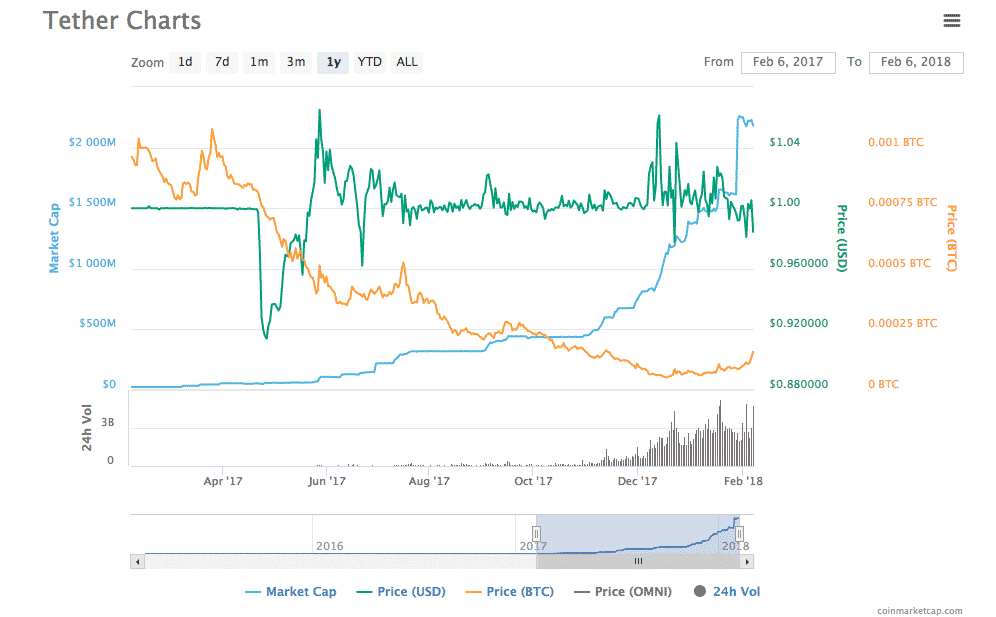 The factor of this equation that has stirred the most controversy is that according to a company announcement, ‘all incoming international wires to Tether have been blocked and refused by [Tether’s] Taiwanese banks’ since April 18, 2017.’ The announcement continued to say that ‘as such, [Tether does] not expect the supply of tethers to increase substantially until these constraints have been lifted.’

So, the question is–if Tether has not been able to receive incoming wire transfers, where are all of these new Tether dollars coming from?

Could Fake Tether Tokens Be Artificially Propping Up the Price of BTC?

Many in the crypto community have suspected that Tether is ‘printing’ tokens based on no real-world value, including security researched Tony Arcieri, who wrote in a late-January blog post that “I, and many others, suspect Tether is being used to effectively counterfeit hundreds of millions of dollars of perceived value, which are being immediately reinvested into Bitcoin to keep it from collapsing.” In other words, Tether dollars could be being created to artificially prop up the price of Bitcoin everytime it falls.

More recently, an anonymously-authored public report commissioned by crypto investor pool 1000x Group explained that if Tether is removed from the equation, the price of BTC would be just $4,500, roughly twenty-five percent lower than its current valuation of around $6,000.

The report went on to say that a 30-80% price reduction in BTC could be forecast ‘if there is questionable activity.’ Several scenarios were laid out in which the price of Bitcoin should have been as little as thirteen percent of what it was at the height of its December boom.

The report also revealed a suspicious correlation between influxes of new Tether tokens and sudden, sharp rises in the price of Bitcoin. “48.8% of BTC’s price rise in the period studied occurred in the two-hour periods following the arrival of 91 different Tether grants to the Bitfinex wallet.”

Tether is ‘Printing in Response to Market Conditions’

The author of the report comes to an alarming conclusion: “It is highly unlikely that Tether is growing through any organic business process, rather that they are printing in response to market conditions.”

It is certainly possible that Tether could have $2.2 billion worth of USDT sitting quietly in a bank account of unknown origin, but so far, the company has not made any concrete, public plans to hire a new auditor or produce any evidence of the existence of such a large sum.

Tether did publish a document in 2017 confirming that on March 31, there were $44 million spread across seven Tether bank accounts, a figure that matched the circulating supply of Tether tokens at the time.  However, the next document that Tether published–the unofficial Friedman audit that was released in September–raised some significant concerns.

The Friedman report noted that $443 million were accounted for across only two separate bank accounts. However, as Ars Technica reported, $60 million of that sum were not listed in an account under Tether’s name, but the name of ‘an individual connected to Tether.’ Furthermore, Friedman “makes no representations about the sufficiency or enforceability of any trust agreement” between Tether and this individual.

It’s possible that Tether made the decision to redact the names of the banks associated with the accounts holding the funds because of a wish to avoid further trouble with regulators in the countries where the accounts are located, but again–the lack of an official audit is somewhat telling that something is amiss.

Implications for the Future

As analyst Timothy Lee wrote, “because a dollar-pegged cryptocurrency like tether is so useful, demand is likely to outstrip supply as long as the cryptocurrency economy is expanding.” That is to say that in the midst of a boom–like the one we saw in December–the rapid influx of new investors caused a spike in the demand for Tether dollars, making it less likely for anyone to notice that they may be having trouble cashing out their cryptocoins into fiat. 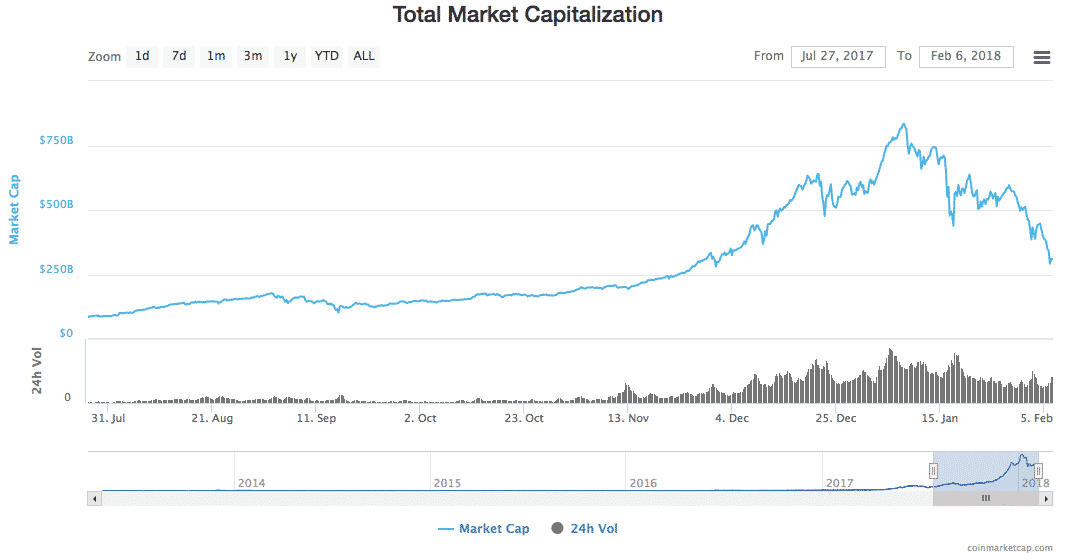 The December crypto boom has been followed by a massive sell-off.

However, now that the crypto markets have been shrinking for several weeks (with no end in sight), investors are starting to want to cash out of the market.  While there’s no hard evidence that any of the speculation surrounding the insolvency of Tether and Bitfinex is the real truth, a mass-exodus from the crypto markets could reveal that the money, well–it just isn’t there.

Crypto Market Rebound: BTC Back Over $8K, Top 100 Coins In The Green

After hitting a multi-month low of $6,094 on Tuesday, Feb. 6, Bitcoin is rebounding substantially Wednesday, Feb. 7, pushing over...