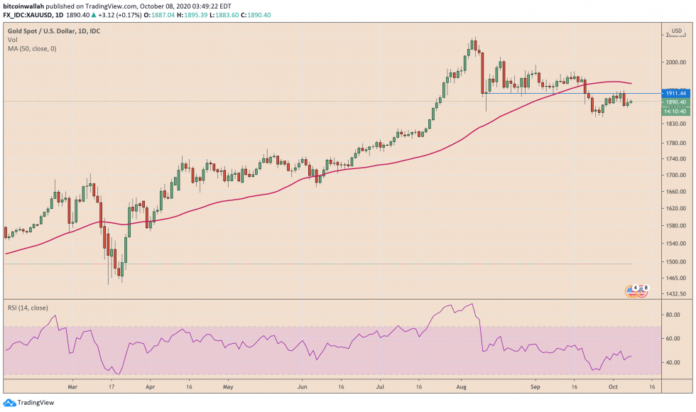 An optimistic forecast for gold is making Bitcoin equally bullish, thanks to its erratically positive correlation with the crypto.

Frank Holmes, CEO of US Global Investors, told Kitco News that the gold market is forming a bottom. Simultaneously, the analyst maintained his upside target for the precious metal at $4,000 in 2020 despite the fears of uncertainty around November’s US election and the second coronavirus stimulus package.

“The bottom that you’re seeing in gold is like a perfect Miami beach bottom,” Mr. Holmes said.

The statement came as gold continues its attempts to reclaim its all-time high above $2,000 amid high profit-taking and a renewed bids for the anti-risk US dollar. But Mr. Holmes expected the demand for the precious metal to go higher in a string of festival seasons across the world.

Gold has slipped 8.88% from its all-time high. Source: TradingView.com

The macro strategist mentioned weddings in India that typically peak after October every year, thus raising bids for gold-made ornaments and jewelry. Moreover, the Hindu festival of Diwali keeps the demand up throughout October and November. The sentiments pick momentum also during the Christmas and the Chinese New Year.

“It’s an auspicious time for the consumption of gold, and it’s most highly correlated with GDP per capita growth,” Mr. Holmes stated.

The expected demand for physical gold and its potential effect on its futures stock offset risks posed by the US presidential election.

Mr. Trump suspected “voter fraud,” leaving investors grappling with the prospects of higher market volatility around the election. As a result, some of them moved into the safety of cash, causing riskier assets to decline. Bitcoin and gold plunged almost in tandem as a result. 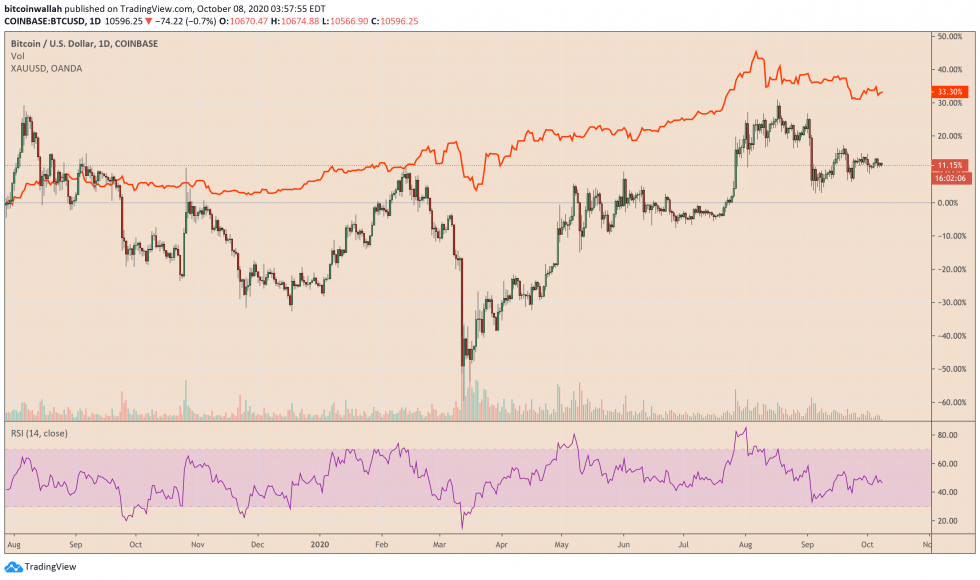 But the metal lately served as a leading indicator to the cryptocurrency. A rise/plunge in XAU/USD typically followed a similar price action in BTC/USD. It showed Bitcoin traders’ inclination to tail gold, for the metal serves as a barometer to measure investors’ risk-off sentiment.

If Mr. Holmes is right about his $4,000-price target for gold, then it may then also see Bitcoin pursuing an upside trend. That would mean a breakout above $12,500, a level the cryptocurrency has failed to break bullish throughout 2020.