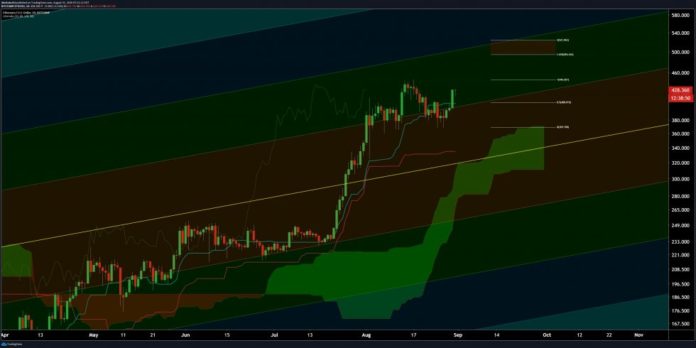 Ethereum is currently the best performing major altcoin within the market, showing serious signs of strength as it outperforms Bitcoin.

The crypto is about to set fresh yearly highs of over $440, although it does appear to be facing some resistance at this level – which may slow its climb in the near-term.

At the time of writing, Ethereum is trading up roughly 3% at its current price of $438. This marks a massive surge from its recent lows of $379 that were set at the bottom of last week’s selloff.

This recent uptrend has allowed ETH to rally up to its previous 2020 highs, although it still remains unclear as to whether or not they will be surmounted.

These highs were set around $440 earlier this month, and the rejection here ultimately led it to plunge down towards its recent lows.

If broken above and flipped into support, this could catalyze some serious momentum for the cryptocurrency.

One analyst believes that Ethereum will flip this level into support and begin rallying even higher in the near-term.

While speaking about this, analyst Josh Olszewicz explained that a failed head and shoulders pattern is one factor that will now boost the ETH bull case and send it up towards $500.

“ETH: always feel more comfortable BTFD than buying HH, but lots of [confluence] for $500 zone b/t failed H&S and PF diag,” he explained.

As long as Bitcoin remains stable or continues slowly grinding higher, it is likely that Ethereum will be able to extend its current momentum further.

Bitcoin has been able to avoid seeing any type of intense bearishness today, as the cryptocurrency is now trading near...