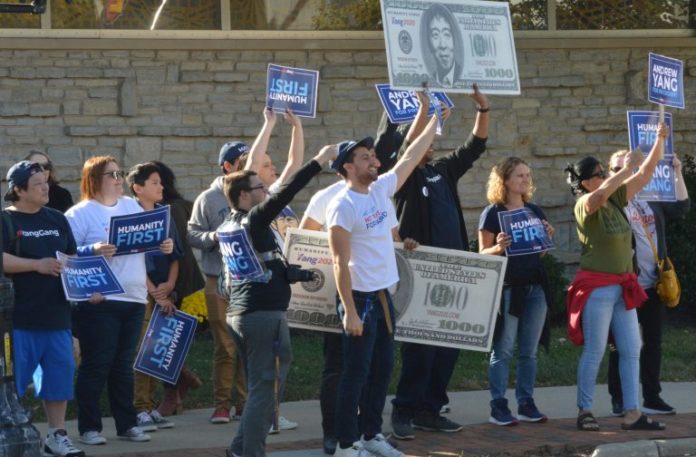 Andrew Yang has taken to Twitter in dynamic fashion as of late, advertising his universal basic income (UBI) proposal known as the “Freedom Dividend.” While throwing money at people out of pocket always generates a buzz, there’s a mathematically and ethically broken side to the plan few are talking about.

Also Read: Do You Know the Newspeak of the Looming ‘NIRP’ Economic Meltdown?

Not so long ago people used to joke about the typical shyster politician and their larger than life campaign promises. Wisecracks about the next White House wannabe centered around grease-ball politicians literally throwing money at voters to buy their support. Well now, under the guise of a hip new presidential campaign, the money throwing is actually happening. To critique Andrew Yang is no easy task, given the understandable and dynamic support he’s received against the backdrop of a totally corrupt and greedy political and financial system. It stands to ask, though: Is he really set to change things? Upon closer examination, UBI is little more than an inept and unethical ploy for socioeconomic power.

If it feels this good to give 10 Americans $1,000 a month imagine how it will feel to do the same for hundreds of millions of us. It will be one of the greatest days in human history.

Generous (With Other People’s Money)

Math. It’s a discipline unlike others for its exact answers and lack of room for debate. One plus one is two. There’s not much dissent possible here, outside of the occasional stoner drum circle or deep metaphysical fireside discussion. Nothing wrong with either, of course, but this is just to lay the groundwork for an argument. Namely, that one cannot give away value one doesn’t have. While Yang is currently giving a “Freedom Dividend of $1,000 a month for an entire year to 10 American families” out of his own pocket, once in office that money set to “do the same for hundreds of millions of us” will come from your pockets.

Yang’s campaign website lays out the groundwork for his proposed “Freedom Dividend.” While a dividend is usually defined as a share of profits paid out to shareholders, Yang’s “dividend” will be made possible “by consolidating some welfare programs and implementing a Value Added Tax of 10 percent.” Not exactly a share of profits as much as money pulled from the pockets of Americans, but for the sake of argument, that will do for now. In assuaging fears of inflation, negative economic impact and even incoming communism, Yang maintains on the site:

The federal government recently printed $4 trillion for bank bailouts in its quantitative easing program with no inflation.

This assessment is massively dishonest, and if not, massively ignorant of basic economic realities. It ignores math, in other words. There are many types of inflation and some of the most pernicious hide beneath the surface of popular reference. While consumer price index inflation (CPI) may appear almost unaffected during some periods of quantitative easing (QE) due to a mix of market factors (including the psychological aspect of consumer confidence), asset price inflation is the real trigger for more serious problems. In other words, even as the debt racket of modern government paper spirals out of control, if the people are confident in their money and the state’s reassurance of its value, CPI may stay relatively stable, and businesses will be unable to increase prices due to this psychology and other factors such as healthy, corrective deflation.

While Yang claims the printing of $4 trillion for bailouts caused “no inflation” the housing and asset market is calling BS in unprecedented and truly frightening fashion. If a house was worth $200,000 five years ago, and now is worth $300,000, this doesn’t necessarily mean the house changed, or that the property became legitimately more valuable. What it often means is that the dollar became significantly weaker against the asset. As these asset prices are thus inflated, banks are able to give out bigger and bigger loans against the asset collateral. Once the jig is up, the bubble bursts and the tumble down is severe, with collateral value no longer covering loans. The graph above shows just how dramatically this buildup is happening currently, with asset inflation signaled by U.S. household net worth against GDP at an all-time-high since 1952 of 535%. Not only is Yang’s proposition economically unsound, it’s also morally objectionable. This is a hard pill to swallow for many hopeful millennials and Yang gang supporters of all ages, tired of scraping by and struggling in the current corrupt, Keynesian paradigm. That notwithstanding, Yang’s “Forward” is no different from the vague and vapid “Hope,” Change,” or “I’m a better man” of previous candidates.

To pay the Freedom Dividend, Yang proposes you be robbed. Business owners not wishing to apply his suggested VAT would be punished for refusal. Consumers not wishing to pay it, as well. It’s an unpleasant reality, but there’s no way to put it more accurately. Yang explains:

A Value Added Tax (VAT) is a tax on the production of goods or services a business produces. It is a fair tax and it makes it much harder for large corporations, who are experts at hiding profits and income, to avoid paying their fair share.

Many are unsure of what Andrew Yang’s fair share of their income should be. If I similarly were forced to pay every neighbor I have a portion of my paycheck because 15 or 20 of them said I must, or be put in a cage, people would be understandably scandalized by the sociopathic suggestion. But if the theft is euphemized as a “Freedom Dividend” it’s suddenly made much more palatable to the masses. While some maintain taxation is a necessary evil for preserving civilization, this position is illogical. There’s nothing civil about stealing from anyone under threat of violence, and a social need doesn’t justify criminal activity, anyway. If it did, the folks in the U.S. during the plantation slavery era would have been correct in their protests against abolition: “But who will pick the cotton!?” Leaving Andrew Yang’s universe for a moment, it seems important to address crypto as a potential solution for the current political corruption he supposedly stands against. A recent opinion piece in the Washington Post proclaims: “Facebook’s cryptocurrency won’t help the poor access banks. Here’s what would.” The piece goes on to detail the impossibility of Facebook’s upcoming Libra cryptocurrency actually helping the unbanked of the world, due to government regulations. The article un-ironically closes by suggesting that the very same overbearing government is the solution, stating: “It’s true that financial inclusion would help millions of Americans and benefit the economy. But it can be achieved through time-tested and democratic institutions. In fact, the United States already has a public payments system: the Federal Reserve.”

What so few in the space seem to realize about crypto is that the potential for banking the unbanked, pulling people out of poverty, and enabling savings and the building of wealth for the average individual is already here. The state stands in the way with endless surveillance, KYC/AML requirements, taxes and capital controls, so it happens in the regulatory cracks, at present.

Instead of a $1,000 monthly paycheck in trash money, why not drop all restrictions on trade and allow people to grow their wealth and businesses independently? If we’re worried that criminal warlords and kingpins would take over, just look around — they already have. It is precisely because of the illogical centralization of power and lack of a logical, level playing field that a candidate like Yang can gain any prominence at all. In a free society — and no offense here to Yang personally — he’d likely be known as just a common con artist.

What are your thoughts on Yang’s proposed UBI? Let us know in the comments section below.

Crypto Exchange Huobi to Freeze US User Accounts by Mid-November

Singapore based crypto exchange Huobi is set to freeze accounts controlled by US residents in an effort to crack down...