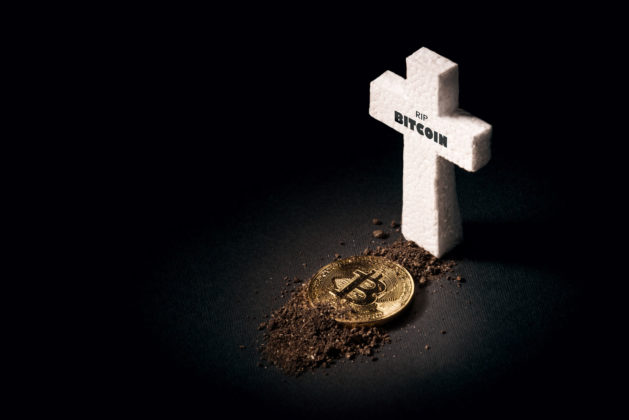 There have been countless red Fridays over the past few years and bitcoin has died countless times according to mainstream media. Today is looking pretty grim with a $10 billion slump in total crypto market capitalization and BTC plunging through support … but we’ve seen it all before.

Every year since the inception of bitcoin it has died if the mainstream media is to be believed. A sharp decline in price sends out waves of irrational panic as day traders and those looking for a quick buck scrap their satoshis en masse.

Investors on twitter such as Stephen Cole were quick to point out that there is no real need to panic as this has all happened before … more than once.

Each time bitcoin has died, its price has been higher with today’s ‘death’ holding at $7,500. In 2018 Forbes, which often gets things completely misconstrued regarding crypto, said that it was going to zero when priced at $3,400.

What actually happened over the next six months was an epic 300% bitcoin surge to just under $14k. Today it is down by half and the death calls are being heard again. The fact that people are hodling is enough to prevent the asset from dying at all as Cole observed;

“Hoarding bitcoin is arguably the most important use case. The more people hoard, the faster we get to a market cap in the trillions, making BTC less volatile and more practical as a unit of account.”

Serial bitcoin bashers such as Peter Schiff are jumping with delight as the asset plunged 4.5% overnight. Either to get attention or just out of obliviousness of how crypto markets work (hint, not the same as gold markets), his latest tirade printed a death down to $1,000.

According to 99bitcoins.com, the digital asset has died a total of 377 times to date and that number is likely to increase following this week’s rout.

All is not lost, despite the BTC fear and greed index dipping into ‘extreme fear’ today. There is still the notion that huge pullbacks are common before halving events and the timing is about right for this one. Buyers want to get BTC at a premium and that level appears to be in the $6k range at the moment.

Trader and analyst ‘Rekt Capital’ is confident that there will be a larger rally before next year’s halving;

“Bitcoin tends to retrace strongly a few months prior to its Halving. These retraces tend to be the 1st major correction in a new $BTC Bull Market”

The HL shows that people want to buy BTC at a premium pic.twitter.com/f6YoSBEm9B

Either way, the doom merchants and detractors will be rejoicing while those that have seen it all before will be buying the dip.

Will bitcoin die for real this time around? Add your comments below.

The post Another Bitcoin Death, Or Just Another Day in Crypto Markets appeared first on Bitcoinist.com.

Bitcoin’s ‘cash-settled’ futures market is coming to Singapore. ICE, the operator behind Bakkt’s BTC futures firm, has chosen to offer...