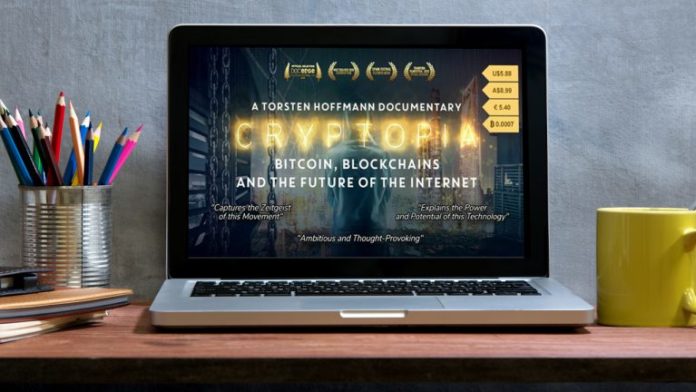 This week filmmaker Torsten Hoffmann launched the cryptocurrency-infused documentary “Cryptopia: Bitcoin, Blockchains and the Future of the Internet.” Cryptopia discusses the powerful economy and flourishing ideas that stemmed from Satoshi’s invention through the eyes of some of the industry’s well known movers and shakers.

Cryptopia: Bitcoin, Blockchains and the Future of the Internet

The three-time award-winning filmmaker Torsten Hoffmann is back again after his acclaimed film “Bitcoin: The End of Money As We Know It.” Hoffmann’s latest picture stars people like Andreas Antonopoulos, Roger Ver, Charlie Lee, Samson Mow, Preethi Kasireddy, Wences Casares, and Laura Shin. The film discusses how bitcoin and the technology and applications that stem from it, have and continue to transform our world for the better. Further, the film touches on web 3.0, decentralized finance, and a few different themes than the last documentary. Anyone can visit the official website and watch the movie for a ticket price of $5.88 (5.40 euros) or 0.0007 BTC. Antonopoulos is featured throughout the film and during the movie, the crypto evangelist said: “We don’t have broad enough adoption and we don’t have a long-term perspective to be able to determine whether cryptocurrencies will be good as a medium of exchange or store of value. The market will decide. What bitcoin is in Venezuela is different from what it is in San Francisco,” he added. Bitcoin.com’s Executive Chairman Roger Ver was also featured in the documentary speaking on forwarding economic freedom. “If you look around the world,” Ver stressed. “The way that governments finance most of their wars is through the printing money, not through direct taxation.” Ver continued by adding:

The film also touches on the scaling debate and Ver explains his distaste for the censorship that stemmed from the moderators of forums like r/bitcoin and people who consider themselves “toxic bitcoin maximalists.” It is well known that for years, thousands of comments on r/bitcoin were censored if anyone discussed the scaling topic or even if they quoted Satoshi’s own words.

Some other comments from the cast were Litecoin’s creator Charlie Lee and Blockstream’s Samson Mow. Lee noted that “in order for cryptocurrencies to thrive we need to work with the current financial system.” Meanwhile, Mow discussed the company’s notorious satellite project saying: “Blockstream satellite is a needed technology in order for bitcoin to become the foundation of a new global financial system.” In order to catch the rest of the commentary from the crypto industry’s biggest names, you’ll have to grab a ticket from Hoffmann’s Cryptopia website. Hoffman said that the first film had a lower budget and this time around, the team put 8X the funding into Cryptopia. Screen Australia, A German broadcast co-production helped bolster the production costs. “This allowed us to tell our story in a more ambitious cinematic universe. Elaborate 3D animations were created to illustrate blockchain’s inner workings. We fly 5-person crews into a remote part of Switzerland to a secret location. We filmed consistently with two 4k cameras and partially even in 8k resolution,” Hoffman detailed during the release this week. You can check out the trailer below and also see the whole film at the Cryptopia website.

What do you think about the Cryptopia film? Let us know in the comments below.

Ultragate – not only a cryptocurrency but also a job marketplace and an online marketplace. The products offered by Ultragate...