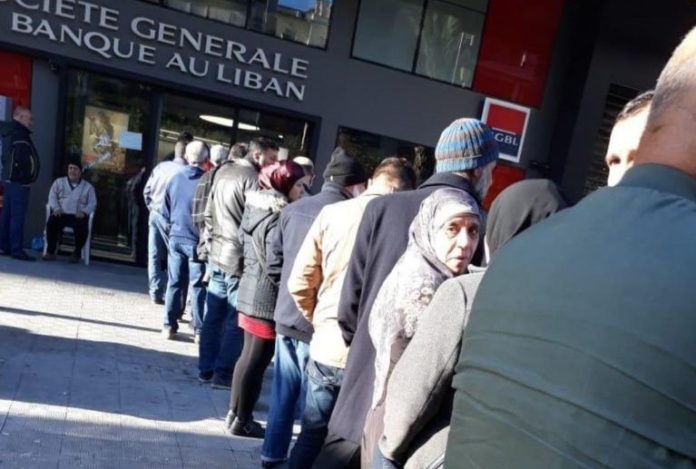 Lebanese citizens have been dealing with economic hardship, as the country’s central bank imposed customer withdrawal limits last October. The problems have continued over the last two months, as ATMs have stopped dispensing cash and bank branches close doors in fear of angry clients. Regional reports disclose Lebanese bank customers often wait for hours in long lines at local branches only to be told the bank’s cash reserves have run dry.

During the last few months, banking customers in Lebanon have been dealing with withdrawal limits and cash shortages throughout the country. News.Bitcoin.com reported on the start of the friction between the country’s citizens and Lebanon’s central bank. At the time the financial institution (Banque du Liban or BDL) imposed cash withdrawal limits across the country and bank customers were only allowed to withdraw $1,000 per week.

After the withdrawal restrictions, Lebanese citizens began protesting as the nationwide cash crisis saw emptied ATMs and a slew of banking institutions closed. The problems continued into November, as banks remained closed because they were constantly dealing with protestors and angry clients. Demonstrators say Lebanon’s central bank and the country’s smaller financial institutions mismanaged the country’s wealth.

In 2020, the situation in Lebanon remains the same and local reports detail on January 4, banks in northern Lebanon started closing again. Lebanon’s National News Agency said that lenders “balked at customer anger over a liquidity crisis.” AFP reports that banks in the northern region of Akkar locked the doors and shut down on Friday and Saturday. Sources noted that Lebanon’s Association of Banks called the branches and told them to shut down “until further notice.”

A 10-Hour Standoff Between Bank Employees and an Angry Customer

AFP also added that angry customers went to a bank office in Halba in order to protest the withdrawal limits. The demonstration ended with a 10-hour standoff between a customer and the bank’s officials. The customer said he wouldn’t leave the bank branch unless he was compensated with his money, but he was escorted out by law enforcement to a local hospital. As the man was ushered to the clinic, bank officials promised the man his funds were safe. That same day, Lebanon’s Association of Banks made a call to certain branches and told them to shut down. The banking organization cited the demonstrations as a “threat to the lives and safety banking employees.”

The news from Lebanon follows the restrictions on withdrawals Indian banks levied after the Reserve Bank of India (RBI) imposed strict restrictions at the end of September. Similarly to the Lebanese situation, Indian bank clients protested the rules and several arrests took place after the RBI placed regulatory guidelines on more than 100 branches.

What do you think of the situation at Lebanese banks and lending institutions? What do you think of Lebanon’s central bank restricting people from accessing their savings? Do you think cryptocurrencies are the answer to problems like these? Let us know in the comments section below.

The publication of crypto exchange Kraken’s 2019 Transparency Report has provoked discussion about the scale of government surveillance. According to...