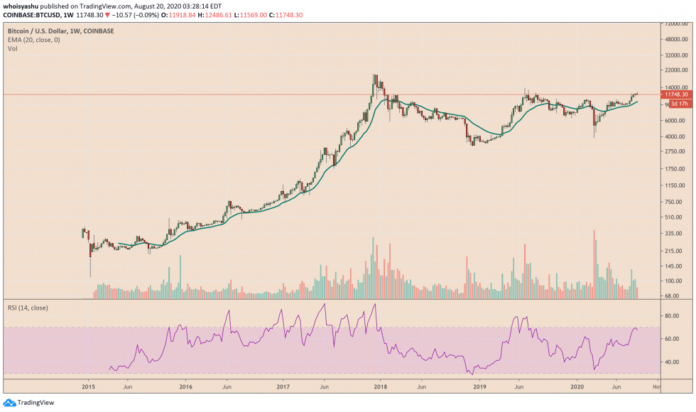 Bitcoin remains one of the best-performing assets this year, now sitting atop more than 60 percent gains.

The benchmark cryptocurrency on Monday nearly hit $12,500, a level it had not touched since July 2019. The upside move came as a part of a broader bullish rally that began in March 2020. Back then, BTC/USD had fallen to as low as $3,858 against a more robust demand for the US dollar. But at its yearly top, the pair was up 223 percent from its March nadir.

All the catalysts seem to point Bitcoin at further higher levels. They include the Federal Reserve’s open-ended monetary easing policy, massive government spending, a weaker US dollar, and growing concerns that it might all lead to higher inflation soon.

Holger Zschäpitz, a journalist associated with Berlin-based Welt, highlighted the same in his latest tweet. He suggested that the US central bank’s policy was the main driver behind the Bitcoin’s ongoing rally. Excerpts:

“Bitcoin jumped to $12,400, highest since July 2019, adding to 2020 rally that has seen it more than treble since March. Plummeting interest rates and huge money printing by CenBanks have boosted demand for the cryptocurrency, seen as a hedge against inflation due to its capped supply.”

But the latest Bank of America survey of fund-managers may spill cold water on Bitcoin’s bullish aspects. The study did not mention the cryptocurrency but sought opinions on an asset that rose higher this year amid the same fundamentals that sent the Bitcoin price rallying.

A net 31 percent of the respondents to the BofA survey termed gold as overvalued, its highest percentage since 2011. A month ago, the rate of gold rally naysayers was zero percent.

Gold on Thursday was trading near $1,945 an ounce, down 6.24 percent from its all-time high established on August 3. The correction appeared on a renewed buying optimism in the US dollar market. The same factor pushed the Bitcoin price lower this week, with BTC/USD falling towards $11,750 after briefly topping out near $12,500 on Monday. 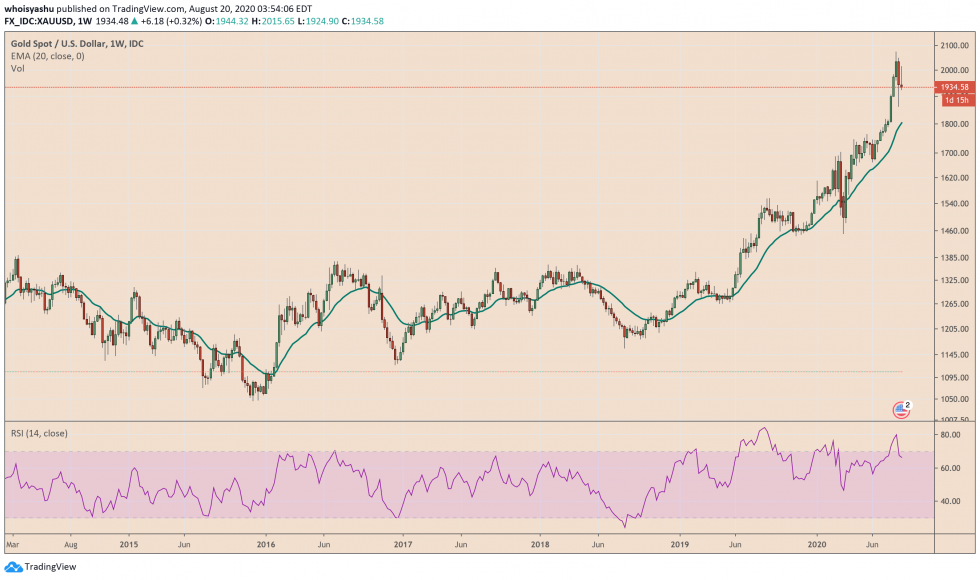 The gold chart on TradingView.com showing XAUUSD in a corrective trend

A warning for gold bulls put Bitcoin under similar downside pressure. The cryptocurrency sits atop better yearly profits than the precious metal. It makes it an ideal asset to dump for attractive benefits should the US dollar continue its rebound.

But Will The Dollar Rise?

Analysts at Morgan Stanley picked the US dollar as their best safe-haven asset despite the greenback’s aggressive slide in and after March 2020. They noted that investors are using a cheaper dollar to enter riskier markets as carrying trades. Those speculators may cash out of those high-yielding assets to seek shelter in the dollar – all over again.

“We expect the US dollar (USD) to be the best safe-haven currency, especially now that lower US rates make it a more attractive funding currency for ‘carry trades,’” the analysts wrote in a research note.

Bitcoin and gold are among those “high-yielding assets.”