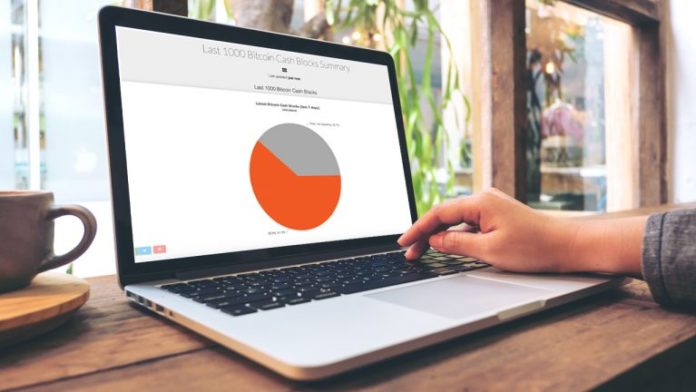 Bitcoin Cash proponents have recently noticed that the last 612 blocks or more than 61% of the last 1,000 blocks have been mined using BCHN, according to Coin Dance statistics. Moreover, data also shows that 82% of Bitcoin Cash hashpower is signaling BCHN, as the prominent miners Btc.com and Antpool have started signaling.

BCH fans are patiently waiting as there’s 53 days left until the November 15th Bitcoin Cash upgrade. News.Bitcoin.com reported on September 1, on how there’s a high chance the BCH blockchain will bifurcate into two networks.

At that time, our newsdesk detailed how prominent members of the BCH community bid the Bitcoin ABC developers farewell, and a number of mining operations began signaling the node BCHN.

Today, Coin Dance statistics show 612 out of the last 1,000 blocks have been mined using the BCHN full node software. Toward the end of September, two new pools joined the fray of BCHN signalers, as Btc.com and Antpool started signaling BCHN in their coinbase parameters.

This means currently 82% of the entire BCH hashrate has been signaling BCHN. Pools included in this group include Binance, Antpool, Btc.com, Btc.top, Bitcoin.com, Huobi, Okex, MY7A, easy2mine, and Bejn.

During the last 12 hours, around 2.6 exahash per second (EH/s) of hashrate has been directed at the Bitcoin Cash (BCH) chain. Additionally, the trading platform Coinex revealed contingency plans for the upcoming upgrade, as the announcement mentions the possibility of a network split.

🔥The Bitcoin Cash network will undergo a semi-annual hard #fork upgrade on Nov 15.

Coinex also announced the introduction of futures slated to drop on September 24. Bitcoin Cash supporters will also be waiting for other exchanges to reveal contingency plans as well going forward.

The futures listed on the crypto trading platform Coinflex show ABC versus BCH futures are still 10-to-1 in favor of BCH. While BCHN blocks crossed the 60% range, BCH supporters on the Reddit forum r/btc discussed the changes. Many expect the number of BCHN-mined blocks to increase during the next few weeks.

One Redditor noted that since Antpool just recently joined with 20% of the hashrate, the “[seven] day average should reach ~75% in [five or six] days time.”

What do you think about the hashpower signaling BCHN and the recent futures announcement from Coinex? Let us know what you think in the comments section below.

Bitcoin is technically in no man’s land a number of analysts have said after the crypto’s recent drop. The cryptocurrency,...