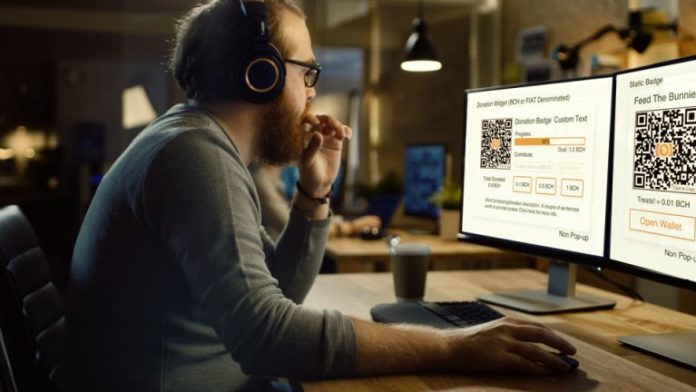 On Tuesday, Feb. 5, the well known Bitcoin Cash (BCH) advocate Soupernerd announced the pre-release and testing phase of a new BCH-powered payment button. At the moment the Paybutton.cash application will feature a simple payment button but there are plans to integrate other features down the line.

There’s a new payment button called Paybutton.cash that allows people to easily send and tip bitcoin cash to content creators, services, and websites. The full release of the application is not complete yet but the developer known as Soupernerd has announced the pre-release and testing phase. Soupernerd says the Paybutton team is currently waiting for Badger Wallet updates before activating that as a payment option and there is more to be tested.

“Paybutton.cash is pleased to announce our pre-release launch and testing phase,” explained Soupernerd on the Reddit forum r/btc. “Host a paybutton on your site with just snippet of code and convert 160+ currencies to BCH live — [Paybutton] is fully hosted on Github.”

The Paybutton creator explains that a lot of credit goes to the Bitcoin.com and Badger Wallet development teams for making the platform possible. Moreover, Soupernerd says the Paybutton developers have a few more ideas in mind that go beyond just a simple payment button. On the r/btc thread, Soupernerd describes a static badge concept which could be placed next to the BCH Zoo. Further, the creator shows images of a donation badge and mentions a concept called “Paybutton Carts.” “More on that later,” says Soupernerd. “We will keep the pre-release folders up, even upon new releases until further notice.”

Other BCH-Powered Button Applications in the Works

The Paybutton platform joins two other BCH payment button applications that are also in early development stages. The applications started spawning after Ryan X Charles removed bitcoin cash support from his Money Button project and decided to support the coin BSV. Following the Money Button departure, the team behind Badger Wallet has been working on refining a BCH payment button. Another competitor to the Money Button is the bitcoin cash payment API and button provided by Gateway.cash.

“Gateway.cash will be a Money Button competitor for bitcoin cash and is now released open-source — The project is led by Ty Everett and he is looking for contributors,” the Gateway.cash developer explained on Nov. 19.

“Looks cool. For those that don’t get the significance it allows anyone without programming skills to more easily accept BCH — For example, tons of people have blogs or various other web presences where they can post raw HTML for visitors to see,” the Redditor emphasized. He continued:

Without coding skills, if Rick wants to take $1.50 donations for his blog posts he can at best post his BCH address.

Soupernerd’s Paybutton code can be reviewed here, and a description of some of the HTML codes can be seen here. People can test the Paybutton with the pre-release page and wait until the full release is complete. “We’re working hard to finish the development and our target launch date is Q1 2019,” states the Paybutton website.

Bitcoin price (BTC) experienced another leg down in the past 24 hours, dropping almost 2 percent on the day. The...