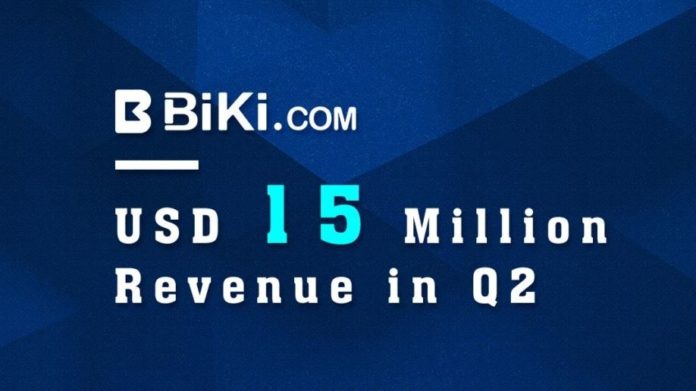 15th July, Singapore, Singapore – The numbers are in and fast-growing exchange BiKi.com is proving it is no flash in the pan. According to official reports, BiKi.com’s revenue figures in the second quarter exceeded USD 15 million, which is a 500% increase when compared to figures from the first quarter. This works out to one-eighth of leading exchange Binance’s reported Q2 revenues.

BiKi’s June trading fees is also currently 20% of OKEx’s. Its total registered users have now reached 1.5 million, with 130,000 daily active users, numbers which are comparable to top tier exchanges like Huobi. The trading platform now provides 220 trading pairs and ranks amongst the top 20 on exchange ranking sites such as  Feixiaohao and Mytoken.

BiKi.com has continued to forge an impressive progression since it began in June 2018 and this has attracted investments of nearly USD 10 million the past year from investment institutions and individuals the likes of Du Jun, Zhu Huaiyang (Genesis Capital), FBG Capital, and ChainUp.

Cryptocurrency exchanges generally operate within an extremely competitive environment and many exchanges undertake wash trading to maintain their competitive edge. BiKi.com claims it does not practice wash trading and attributes its success to two factors – project selection and how it gains and retains market share.

BiKi adopts an astute set of criteria when choosing projects to list and one of them requires that all listed projects have strong communities of token holders behind them. This is contrary to cryptocurrency exchanges who charge high listing fees and then have to rack their brains to bring in users to trade. As was the case with FCoin Exchange, the “Transaction Mining” mechanism devised by its team did indeed attract a huge user base within a short period of time. However, once the dividend period was over, it was simply a matter of time before its user base had all but dissipated.

BiKi’s strategy of maintaining long term relationships with venture capitalists and investors ensures that BiKi has opportunities to either list top tier projects on a moment’s notice, or be the first exchange to list a certain project. As a result, BiKi’s users have access to a wide variety of high quality tokens to trade –  clearly a factor why BiKi has emerged as the industry dark horse.

Conversely, projects who list on BiKi see the exchange as a stepping stone to gain a new level of recognition in the industry. Listing on BiKi has become somewhat of a yardstick measure of project quality, aided in no small way by BiKi’s 130,000 daily active users who organically generate demand for their tokens.

The sustainability of an exchange is actually not dependent on its current profitability, but on its ability to retain its users and effectively recruit new ones. BiKi was the first exchange to acquire users through its ‘community fission’ model, which is a way of scaling communities using recommendations from present users to attract more users.

Blockchain projects cannot succeed without strong communities, and the network dynamics BiKi uses to acquire users are one of its core competitive advantages. Presently, BiKi has more than 200 official community groups, more than 100,000 community members, and is still growing at a rate of 300 new members per day.

Similar to Chinese e-commerce platforms Yunji and Pinduoduo, BiKi’s Partner Program rewards Community Partners who introduce more active users to the platform. The ‘community fission’ model shifts the responsibility of customer acquisition to present customers themselves and its inherent network dynamics builds a base of new users that continues to ‘grow’ other users.

What is important to note, though, is that despite the program restricting the network to only two tiers of membership, the efficacy of this model speaks for itself – BiKi has managed to amass 130,000 daily active users and USD 15 million in Q2.

During a bear market, BiKi.com acquired 1.5 million registered users on the exchange, setting an industry precedent in user acquisition. BiKi’s strong base of relationships and users provides a clear value proposition that projects can tap into to reach their milestones. The exchange continues to welcome projects to join the growing community of choice projects currently listed on BiKi.com.