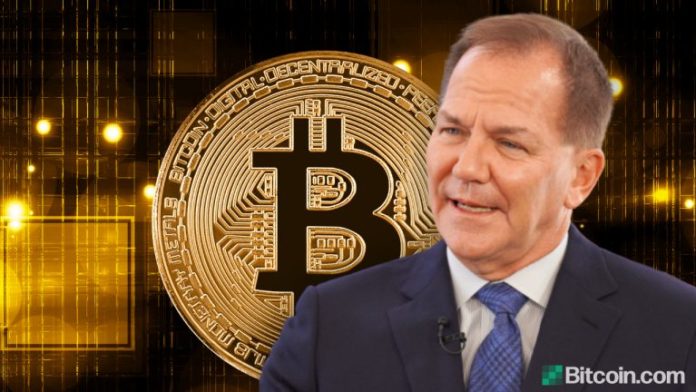 American billionaire hedge fund manager Paul Tudor Jones has recently become more bullish on bitcoin. He declared the cryptocurrency the best hedge against inflation and compares investing in bitcoin now to investing in early tech stocks, like Apple and Google. “I think we are in the first inning of bitcoin and it’s got a long way to go,” he said.

Paul Tudor Jones explained why he is more bullish on bitcoin now in an interview with CNBC Squawk Box on Thursday. Jones founded Tudor Investment Corp., an asset management firm headquartered in Stamford, Connecticut. He became famous after predicting and profiting from the 1987 stock market crash.

The billionaire investor caught the attention of the crypto community back in May when he revealed on the show that he had invested about 2% of his assets in bitcoin. Now, four months later, bitcoin’s price has rallied more than 46% and there has been a string of bullish news, such as the recent announcement by Paypal to support cryptocurrencies, including bitcoin, on its platform.

Jones was asked if these developments have changed his BTC investment decisions, particularly whether he was buying more BTC or selling some. He clarified by reiterating his reason for liking bitcoin and recommending to his clients early this year. “Back in March and April, it became really apparent, given the monetary policy that was being pursued by the Fed, the incredible quantitative easing they were doing and other central banks were doing, that we were in an unprecedented time,” he explained. Noting additional problems brought about by the Covid-19 pandemic, he said, “one had to begin to think about how you defend yourself against inflation.” The Federal Reserve has also announced a major policy shift to push up inflation.

The founder of Tudor Investment Corp. continued to explain that he recommended bitcoin as an inflation trade, like gold, copper, the S&P GSCI commodity index, and being long the yield curve. He added:

I came to the conclusion that bitcoin was going to be the best of inflation trades, the defensive trades that you would take.

He then outlined why bitcoin is better than other assets for hedging against inflation. Examining the overall market caps and characteristics of all inflation trades, he said that bitcoin has “a very small coterie of people investing in it, it was portable, it was liquid, had a variety of characteristics that made it a great inflation hedge.” While Jones pointed out that “The one thing it [bitcoin] didn’t have is it didn’t have integrity and long-term staying power,” he emphasized that “every day that goes by, of course, it gains on that. It gains on credibility and integrity.”

The billionaire hedge fund manager admitted that he did not appreciate what bitcoin had when he said he invested about 2% in the cryptocurrency back in May. “I didn’t appreciate and now I know what it must feel like to be a tech investor, remember, I don’t really trade individual stocks,” he conceded. Affirming that he is “just a macro trader,” Jones asserted:

Bitcoin has a lot of the characteristics of being an early investor in a tech company … like investing with Steve Jobs and Apple, or investing in Google early.

Jones further revealed: “I’ve got a small single-digit investment in bitcoin. That’s it. I am not a bitcoin flag bearer.”

After recommending bitcoin and revealing his holdings in May, Paul Tudor Jones said he got “besieged by God knows how many different people on bitcoin.” Admitting that he did not know it at the time, he said: “But what I learned was, and what I was so surprised by is that bitcoin has this enormous contingent of really, really smart and sophisticated people who believe in it.” He explained that bitcoin has supporters, crowd-sourced from all over the world, who are “dedicated to seeing bitcoin succeed in it becoming a commonplace store of value, and transactional to boot, at a very basic level.”

Proclaiming that he “never had an inflation hedge where you have a kicker that you also have great intellectual capital behind it,” he said it “makes me even more constructive on” bitcoin. Jones concluded:

I like bitcoin even more now than I did then. I think we are in the first inning of bitcoin and it’s got a long way to go.

What do you think about Paul Tudor Jones’ bitcoin advice? Let us know in the comments section below.

PRESS RELEASE. SharkTRON decentralized platform has set the goal of maximizing the DeFi TRON potential. The main task is to...