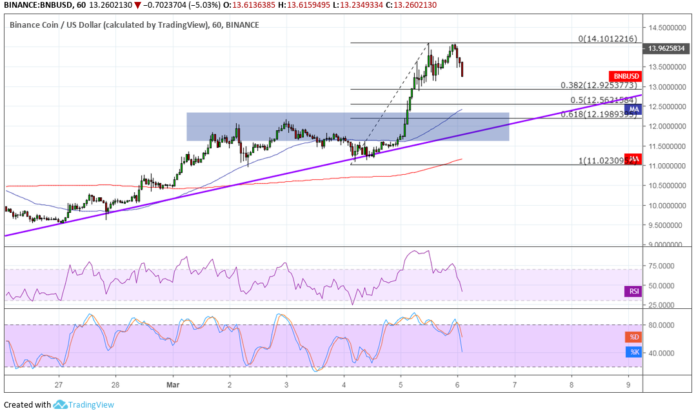 Binance Coin continues to trend higher as it busted through a key resistance level on its move to the $14 levels. This appears to be holding as resistance, though, a correction might be needed to draw more buying energy.

Applying the Fibonacci retracement tool shows that the 61.8% level lines up with a short-term ascending trend line and the area of interest. In addition, this coincides with the 100 SMA dynamic inflection point, which is above the longer-term 200 SMA to show that the path of least resistance is to the upside.

In other words, the uptrend is more likely to gain traction than to reverse. The gap between the moving averages is widening to reflect strengthening bullish momentum as well.

However, RSI is moving south to signal that sellers have the upper hand for now and could keep pushing prices down. The 200 SMA might also hold as near-term dynamic support in a larger drop. Stochastic is also heading south so price could follow suit while bears are in control. Both oscillators are on middle ground and have space to fall before hitting the oversold region.

Binance Coin has overtaken Stellar in cryptocurrency rankings by market cap, which suggests that it could have more investor interest sustaining its bullish momentum. Developments on its launch platform and successful token sales, such as that of BTT earlier on, have caught traders’ attention for this particular digital asset and platform.

BNB has recently hit an all-time high against bitcoin on its positive run, at 0.0036626 BTC. Just recently, Binance CEO CZ announced incentives for users to hold more BNB such as increment in referral bonuses. There is also a lot of anticipation for the launch of he Binance DEX testnet and a simulated trading competition that promises $100,000 in prizes and starts this week.