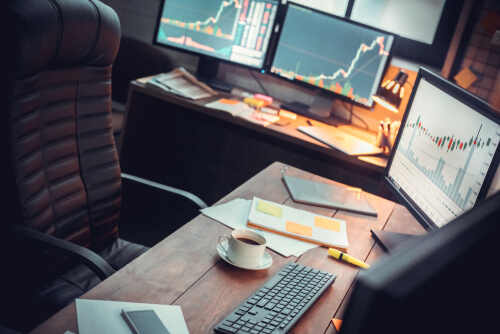 Launching an initial coin offering (ICO) might be a great way to raise funds, but the market is fraught with dangers. Over the last two years, ICO news headlines have ranged from highly complimentary to highly contentious.

Indeed, in 2018, the Statis Group published a report that showed that 70% of the previous year’s ICOs were scams. By either failing to deliver on promises or never making it onto an exchange, many of 2017’s ICOs left investors out of pocket.

The result of these negative ICO news headlines has seen a drop in funding over the last 12 months. Although projects on the top ten ICO list for 2019 have attracted millions of dollars in support, the market as a whole has taken a dive. With safety and legitimacy being an issue, companies have decided to act.

IOTA, the company behind MIOTA Coin, proposed using smart contracts for ICOs. By getting users to pay for a future service rather than tokens, rules could be coded into smart contracts to ensure the benefits are released as certain conditions are met.

The ICO Sector is Evolving

Another alternative to emerge in recent months is Security Token Offerings (STOs). Using a set of standardized digital tokens, STOs would follow rules set out by the United States Securities and Exchange Commission. The theory is that this new type of ICO would be more standardized and, therefore, easier to regulate.

In 2019, Binance Exchange has stepped into the fray with its own idea. Known as Binance Launchpad, the new platform gives start-ups and investors a controlled environment through which to raise funds and invest.

What is Binance Launchpad ICO? According to Binance, it’s a “token launchpad for transformative projects”. In simple terms, it’s a place where start-ups can network with potential investors, improve their product using expert resources and operate under a strict set of rules.

For investors, Launchpad is a place where only legitimate start-ups with a clear vision are permitted. The benefit of having an ICO ecosystem overseen by a company like Binance is that it gives each listed project a degree of legitimacy. Indeed, only after meeting various standards will a start-up be listed on launchpad.

Once accepted onto the Binance Launchpad ICO platform, companies will have instant access to 10 million users. Conversely, investors will have access to hundreds of high-quality ICOs which, in turn, have a strong chance of being listed on Binance.

For any crypto start-up, the end goal is to achieve a listing on a major exchange. Once its tokens can be publicly traded, its value increases, and that’s when ICO investors make their money. Therefore, by creating a virtual launchpad, Binance is making things better for projects and investors.

However, beyond that, this type of project could help the industry as a whole. By setting the standard, Binance will not only help reduce the recent wave of negative ICO news stories but encourage others to follow suit. As an industry, we’re still fragmented. However, when one company does something well, others start to follow.

If Binance Launchpad ICO can improve standards and make crypto investments more enticing, it could start a trend. Although conflicts of interest may arise from cryptocurrency exchanges creating ICO platforms, there do appear to be some positive crossovers. If Binance can show that these positives outweigh the negatives, it may just create a new type of ICO funding.

The post Binance Launchpad ICO Could Change the Funding Game for the Better appeared first on The Independent Republic.