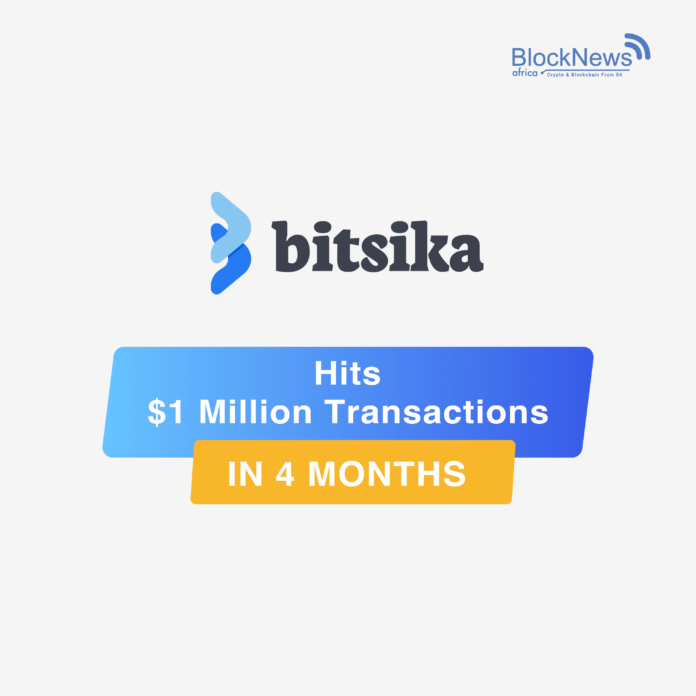 Bit Sika, the cryptocurrency remittance application that allows users to send and spend money in Ghana and Nigeria, has reached a milestone of $1 million total transactions after barely four months of existence.

Atsu, the co-founder of the Bit Sika project, took to Twitter to announce the milestone.

The application has primarily been available to users in Nigeria and Ghana, leading up to the $1 million milestone. Currently, an average transaction value on the Bit Sika platform sits at around $200.

The Bit Sika app enables users to send money (fiat and crypto) from phone to phone. A significant feature of the app is that its fiat-to-fiat remittance is backed by cryptocurrency in the background.

The platform has evolved over the past year from a charity version that allowed users to receive donations from foreign donors in a more responsible fashion.

I built the first version within 4-5 weeks. We decided to build for the everyday user and make things as simple as possible and we take very strong stances on what we are trying to build. Literally, people demanded for its current features.

Beyond reaching $1 million in total transactions, Bit Sika is expanding into new countries and has also received extra funding.

Bit Sika became the first non-Nigerian investment made by VC firm Microtraction in December 2019. Microtraction explained why it was attracted to investing in Bit Sika in a blog post.

Bit Sika has seen an opportunity to help millions of Africans move money quickly and without complexities. Now, more than ever, businesses across Africa can sell goods and receive money from their customers in other countries with ease.

This is the second fundraising stage for the West African startup after it participated in the Binance incubation program.

Also, Bit Sika announced the first African stablecoin based on the binance blockchain at the end of 2019 and is set to launch the African Stablecoin (ABCD) this month.

SINGAPORE, — KuMEX, the Bitcoin futures platform developed by KuCoin, today announced the launch of a Lite version, which not...