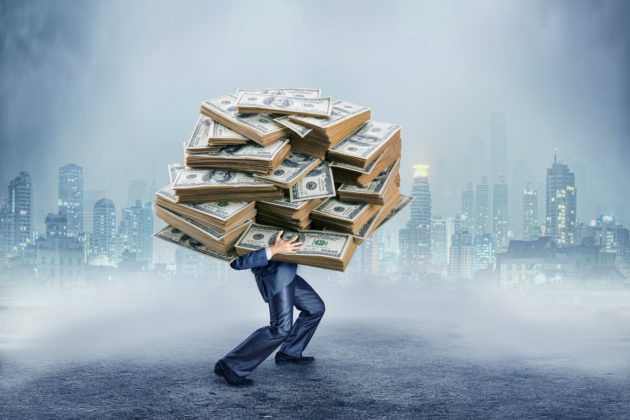 Bitcoin hasn’t done too well since late 2017. From the all-time high of $20,000, the cryptocurrency has collapsed by 50% as it now trades at $9,900.
Yet the fundamentals of Bitcoin are arguably stronger than ever as governments saddle themselves with more and more sovereign debt to keep their economies and underlying societies afloat.
U.S.’ Debt Growth Is Part of a Wider Trend
According to BNO News, the U.S. national debt has erupted to $26 trillion — around 30% higher than the economy’s national GDP for 2019. This is notable as the sum is up more than $2 trillion in the past two months alone, with the Treasury issuing debt to cover up the economic impacts of the global illness.

The swelling national debt of the U.S. is only part of a wider trend though.
According to Bitcoin bull Dan Held, currently of Kraken and formerly an executive at Blockchain.com, there’s been a more-than doubling in the global government debt over the past decade.
He found that global government debt rose from $30 trillion in 2007, prior to the Great Recession, to $70 trillion and “approaching infinity” today.

Like the U.S., all governments have effectively been forced to respond to the worse epidemic in decades with vast amounts of stimulus.
According to a separate analysis by Picton Mahoney, there has been approximately $20 trillion worth of stimulus since the outbreak began. This is equivalent to the total annual GDP of the U.S. and approximately 25 percent of the world’s GDP.
Decisively Bullish for Bitcoin
Prominent investors and analysts expect this trend to be decisively bullish for Bitcoin.
Paul Tudor Jones, a billionaire investor that is one of Wall Street’s most respected macro investors, identified BTC as a viable investment during these times of money printing. In fact, he said that Bitcoin is the “fastest horse in the race” in the current macro environment.
Tudor Jones wrote in a note titled “The Great Monetary Inflation”:
“Owning Bitcoin is a great way to defend oneself against the GMI, given the current fact set. […] I am not an advocate of Bitcoin ownership in isolation, but do recognize its potential in a period when we have the most unorthodox economic policies in modern history.  At the end of the day, the best profit-maximizing strategy is to own the fastest horse. f Iam forced to forecast, my bet is it will be Bitcoin.”
As reported by Bitcoinist previously, SpaceX and Tesla CEO Elon Musk has also picked up on this narrative as a bull catalyst for the cryptocurrency.
The world-famous technologist told J.K. Rowling of the Harry Potter franchise that Bitcoin looks “solid” in comparison to fiat money due to “massive currency issuance” by “government central banks.”
Featured Image from Shutterstock
Bitcoin Bull Case Strengthens as U.S. National Debt Rockets to $26 Trillion