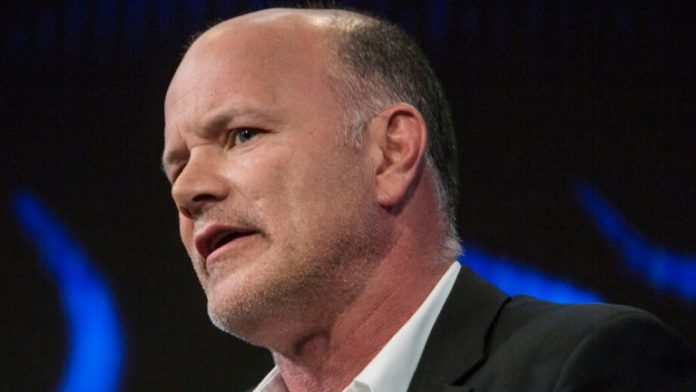 The billionaire investor Michael Novogratz recently detailed in an interview that he thinks global investors should hold more gold in their portfolios and own less bitcoin. Novogratz’s statements follow his recent advice last month when he said investors should “watch gold and bitcoin.”

Michael Novogratz is a well known investor and was a hedge fund manager at the investment firm Fortress Investment Group for years. Now Novogratz is a big believer in digital currencies and in 2017 he told the press that 20% of his net worth was in bitcoin (BTC) and ethereum (ETH).

Novogratz is also known for his price predictions and in December 2017 he forecasted the bear market prices. The investor now leads the company Galaxy Digital Holdings Ltd., and he continues to make price predictions.

On June 1, Novogratz tweeted to his 142,000 Twitter followers that people should “Watch gold vs bitcoin” and “if that chart breaks higher it will turbo boost bitcoin.” Now after the first week of July has ended and BTC prices have been hovering just above the $9k zone, Novogratz told the public they should hold more gold than bitcoin on CNBC’s Fast Money published on July 8.

“My sense is that bitcoin way outperforms gold, but I would tell people to have a lot less bitcoin than they have gold, just because of the volatility,” Novogratz said during the Fast Money interview. The Galaxy Digital founder further added:

Bitcoin is still hard to buy. If it was easier to buy, it would be a lot higher. And there are more and more people making it easier to buy: funds being set up, custodies being done, at one point we’ll get an ETF.

At the time of publication, the price of gold is down lower as spot markets show that one ounce is swapping for $1,804. The well known gold bug Peter Schiff loves the fact that gold is above the $1,800 range and he just amassed a quarter of a million Twitter followers on Thursday. However, Schiff says that most people are not paying attention to gold’s run-up.

“This is the most unloved gold bull market I’ve ever seen,” Schiff tweeted. “Since the end of 2015, the price of gold has risen by over 70%, exceeding the gain in the S&P 500 by about 40%. Despite this performance and the best fundamentals [and] chart pattern in history, investors still prefer stocks.”

Unlike the billionaire investor Michael Novogratz, Peter Schiff still has an extreme distaste for cryptocurrencies. “Bitcoin owners are extremely bullish and almost every article I read predicts that Bitcoin is on the verge of an explosive rally,” Schiff recently wrote. “Yet despite this optimism Bitcoin has been rangebound below $10K for [three] months. If bitcoin can’t rally now despite amazing fundamentals, when will it?”

Max Keiser said on July 10, that he invited Peter Schiff back on the Keiser Report show to discuss “PPP, gold, and maybe bitcoin.”

What do you think about Michael Novogratz telling the public to own more gold than bitcoin? Let us know what you think in the comments section below.

We will be taking into account some of the historical prices and market opinions for ETH in order to develop...