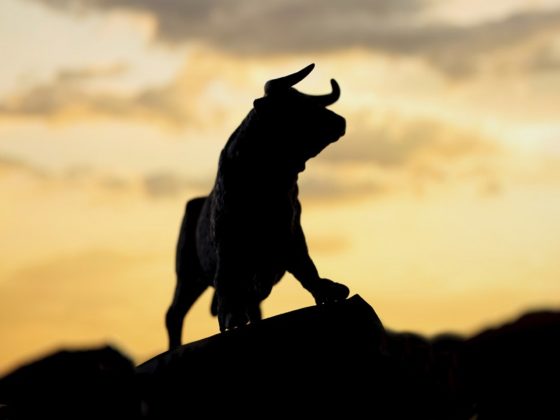 Bitcoin (BTC) awakened from its post-holiday slump, breaking easily above $8,000. A combination of geopolitical tensions and renewed appetite for trading led BTC as high as $8,360.

Bitcoin on Verge of Entering Six-Month Bullish Channel
The most recent price move also shifted the analysis of technical indicators, signaling bitcoin may be ready to follow a bullish scenario. Three technical indicators suggested a new upward drive may be possible. Bitcoin price managed to bounce off the years-long trend of higher lows. The second technical factor was a small head-and-shoulders pattern.

Has a new bull market began in #Bitcoin $BTC? 1. Market held support at lower boundary of multi-yr channel2. Small H&S bottom on daily chart3. Pending penetration of 6+ mo channelIf enough cryptocultists have been shaken out since Dec ’17, then “yes”If not, then “no” pic.twitter.com/vpKQeOKqLI
— Peter Brandt (@PeterLBrandt) January 8, 2020

Following those two completed chart moves, bitcoin has the chance to enter a six-month appreciation channel, though this move is not yet certain and depends on closing levels in the coming days.
Halving May Not be Priced In?
The renewed predictions based on current chart action also match the expectations bitcoin may continue to rally for the first half of 2020. The price moves also mean BTC made its local lows at around $6,500 in December, avoiding the scenario of a dip to $5,000.
Bitcoin price has once again entered a period of active spot trading, based on a “can’t afford not to hold it” attitude. Trading activity expanded to above $30 billion in the past day, as the price broke through milestones above $8,000.
In January, BTC now continues with a new set of support levels at $7,800-$7,900, and further potential for price development.

The current price move also sees bitcoin generally in a longer-term bull market, which started off from lows of $3,200 in December 2018. Despite the temporary fluctuations, BTC has remained above $6,000 for most of the time, with still a preserved trend for a slow climb.
The other matter remains the timing of an altcoin season. For now, the spotlight is on bitcoin, which has expanded its market cap dominance to 69.1%. But there is also a possibility the higher BTC prices may trigger altcoin speculation.
The renewed rally also reignited the narrative that the halving is not priced in yet, and may lead to a new price range.

The bitcoin bull rally also impacted Litecoin (LTC), an asset that moved in unison, adding around 14% in its first week of 2020.
For the leading asset, the current price is taking it closer to its 200-day moving average, however a Golden Cross is still a while away.
What do you think about the most recent BTC price move? Share your thoughts in the comments section below!

Before the emergence of crypto exchanges and trustless multi-sig, early bitcoiners saw the need for an escrow service – a...