There is no doubt that Bitcoin is the most significant and largest success story in the cryptocurrency sphere despite the volatilities the powerful digital coin has been experiencing this year. 2018 has been a rough year for major cryptocurrencies including Bitcoin that has seen the prices of the virtual currency depreciate from a high of 20,000 US dollars in January 2018, to a low of 6,400 US dollars in October 2018.

Regardless of not much powerful performance, Bitcoin still maintains being the most sought-after virtual currency in the market. In totality, Bitcoin had a price appreciation of about 150,000 percent from its listing in July 2010 to the present day.

In its lifetime so far, the number one ranked cryptocurrency has had its fair share of mixed bear runs, and bull runs throughout the years with the longest bear run being experienced in March 2014 and March 2015. However, in its history of up and down price progression throughout the years, gains have outweighed losses and Bitcoin has managed to record impressive highs of 20,000 US dollars as at December 2017.

As for this year, 2018 has been a nightmare for Bitcoin as its bullish gains have been low, recording shorter runs that have given rise to general losses attracting undue media attention from the general public and governments.

The Future of Bitcoin by Market Indicators

According to technical perspectives regarding Bitcoin price movements and its predictions that have been counterintuitive, it has come to the attention of many that historical data-based analysis has been misleading the crypto community abnormally. The descending triangle is one of the many examples that has been misleading the masses that usually represent a price surge forecast.

According to Bitcoin’s market research, the descending triangle has been found out to usually break the bearish forecast that more likely is replaced by price surges throughout Bitcoin’s sequence. This sparks the question of whether cryptocurrency market analysts have been following and improperly studying the triangle. 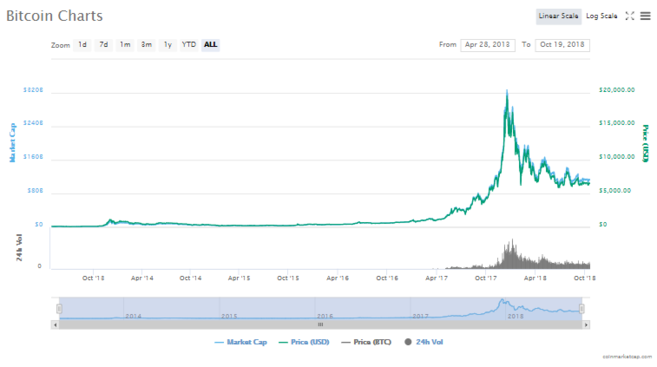 Considering this analysis, Bitcoin’s current triangle is depreciating, an indication of a future price surge in the offing, especially in the first days or weeks of 2019. This prediction and expected trend go in contradiction of the laws of statistical analysis that overthrow counter-intuition issues that can beget a forecast that foretells a bull run for Bitcoin in the early days of next year (if not now).

Also, there is a case for Bitcoin bullish price surge. There is a significant relationship between Bitcoin’s association with the descending triangle pattern and the 200-day moving average, also known as DMA.

The depreciating triangles are formed when lower highs of a series of price movements are connected. Although Bitcoin is exchanging again in a tightening price range that is slightly above 6,400 US dollars, the lateral exchanging may soon give way to a bull run, according to a market analysis by some analysts.

So far, analysts predict a bullish follow-through is expected to take place although it is yet to materialize, possibly because traders are waiting for a more credible and convincing bearish invalidation.

Another factor that is standing in the way of a potential bull run is the number of major key resistance levels.

Should Bitcoin manage to solve and clear these key hinderances, buyers may feel more comfortable into trading given that the cryptocurrency market would bottom out again at the 21-month EMA support levels that could see the prices appreciating towards long-term falling trendline resistance levels of above 7,000 US dollars.

ZebPay Leaves India for Malta After Regulations Crippled Its Business

Zebpay, once India’s biggest Bitcoin payment processor, has announced its move to Malta after its business was ‘crippled’ due to...