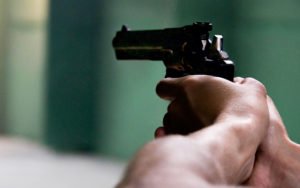 In a daring pre-dawn raid, two thieves were able to enter a liquor store in Philadelphia’s 15 precinct on Frankford avenue, and ransack a Bitbox Bitcoin ATM machine. The thieves were able to pilfer the cash box inside the machine, in front of the terrified store employees.

The city has seen yet another Bitcoin related crime, this time the two assailants entered a convenience store in the pre-dawn hours around 5:50 am on the 7200 block of Frankford ave, in Philadelphia’s 15th precinct. One of the assailants or perhaps the driver of the getaway car itself, can be seen entering the business and purchasing a soft drink in order to scope out the location and make sure the coast was clear for the heist. This individual was so brazen he didn’t even attempt to conceal his identity or face beyond wearing a common hoodie.
A few minutes later, either the same individual in a disguise, or two of his accomplices can be seen on the store’s surveillance cameras, exiting the vehicle which they conveniently parked out of view of CCTV cameras. They proceeded to enter the store wearing ski masks and donning crowbars and began to pry open the ATM machine in front of the establishment’s shocked employees. The employees were behind protective glass, and could do nothing but shout at the burglars. In a time span of less than two minutes they were able to pry open the machine despite it’s locked service compartment, and make off with the cash box inside. The thieves calmly walked off to their awaiting getaway car to make their escape with their ill-gotten proceeds.
If you have any information leading to the capture of these suspects, the Philadelphia Police and the business’ owners would like to encourage you to reach out to the 15th precinct’s Northeast Detectives at 215-686-3153/3154. All tips will be confidential.
Not Philly’s first brush with Bitcoin-related crime
Philadelphia is one of the major US cities on the East Coast, and home to more than 1.5 million residents, so it makes sense that this would not be the city’s first run-in with Bitcoin related crime. In 2017, a 24 year-old Pennsylvania resident was charged with operating an unlicensed money transmitting business, and sentenced to a year in prison for selling more than $1.5 million in Bitcoin to undercover agents of the Department of Homeland security. He was also forced to payback the $40,000 USD he made in commission on the unregulated sales, as restitution in his plea agreement.
One of the stranger aspects of this case was that the defendant was incarcerated on unrelated drug charges for part of the time period in which he operated his illegal money transmitting business. It appears he was able to make illegal Bitcoin sales to undercover agents while behind bars.
In another case, Western Philadelphia US Attorney Scott Brady took part in the federal case against the admins of DeepDotWeb, a website which published news and reviews about the Dark Web’s illegal marketplaces in exchange for kickbacks which were laundered through shell companies. The men who were charged were Brazilian nationals who received commissions for driving new business to the illegal marketplaces which sold drugs, forged documents, malware, and stolen identity documents online.
In one of the stranger cases, another Philadelphia resident under suspicion of burglary claimed to investigators during his interrogation that he had developed a malware program which steals Bitcoin and was responsible for a $40 million USD Bitcoin heist, and had also worked as a hacker for foreign governments. Investigators took his claim seriously and found that he actually hadn’t stolen more than about a $150 dollars in the digital currency. Prosecutors claimed the suspect exaggerated his technical ability and sent them on a wild goose chase.
Do you know of any other wild Bitcoin crimes? Let us know in the comments!

Bitcoin Cash developers recently released the alpha software for Cashfusion, a privacy-preserving feature added to the Electron Cash wallet. During...