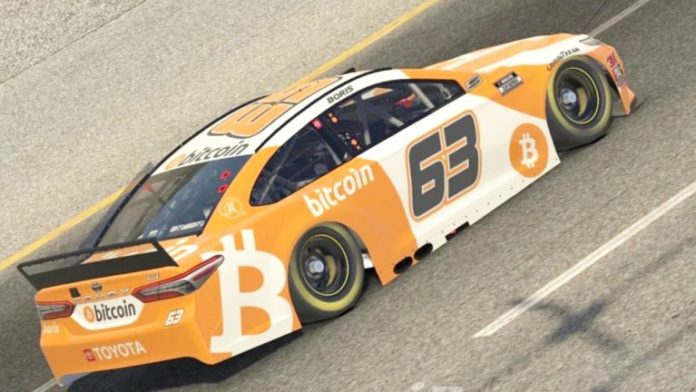 A bitcoin-themed car has won an e-NASCAR race, beating professional Cup Series racers, including Dale Earnhardt Jr. and Kyle Busch. While sporting events have been postponed due to the coronavirus pandemic, many NASCAR drivers have moved to race virtually.

With major sporting events postponed due to the coronavirus crisis, some have gone virtual. One such event was the Leaffilter Gutter Protection Replacements Iracing Series at the virtual Talladega Superspeedway last week. A number of National Association for Stock Car Auto Racing (NASCAR) racers competed, including current champion Kyle Busch.

What’s special about this particular race was that the winning car had the bitcoin logo all over it. Driver Bryan Boris Cook is a bitcoin advocate who has had a bitcoin race car in the racing circuit for a couple of years. Cook, who works for Joe Gibbs Racing, announced on Reddit’s r/Bitcoin forum after his win:

I won in the virtual bitcoin race car tonight and beat the real Dale Earnhardt Jr, Kyle Busch, and other pro drivers in front of 50,000+ live viewers.

“It’s not often you get the chance to compete against your heroes, much less best them,” he added.

Cook won against a number of professional NASCAR racers, including champion Kyle Busch, who tweeted to him after the race: “Was a hell of a race. Good win.” Busch drives in all three NASCAR national series and races full time in the Cup Series; he has 209 victories among all three national series. Dale Earnhardt Jr., a two-time winner of the prestigious Daytona 500 and four-time winner on this very track in Talladega, also lost to Cook, placing 5th overall.

Cook described the event as “a series with people in the racing industry coming together to provide entertainment to fans during these times,” adding that “There were Indycar, drag racing, even ex NFL players in it. Along with crew members.”

He further shared on Reddit, “I’ve been sim racing for 25+ years since I was 12-13. Along the way, I’ve raced with people who are now professionals in the racing industry. I have also made a career out of the racing industry. So when coronavirus hit, the sim racing community looked to organize these races to help fans have some escape and entertainment. I was thankful to be given a spot in the field.”

What do you think about a bitcoin car winning a virtual NASCAR race? Let us know in the comments section below.

Will BTC Price Go Down After the Upcoming Bitcoin Halving?

In today’s article, we will be analyzing if Bitcoin will see a drop in price after its scheduled halving for...