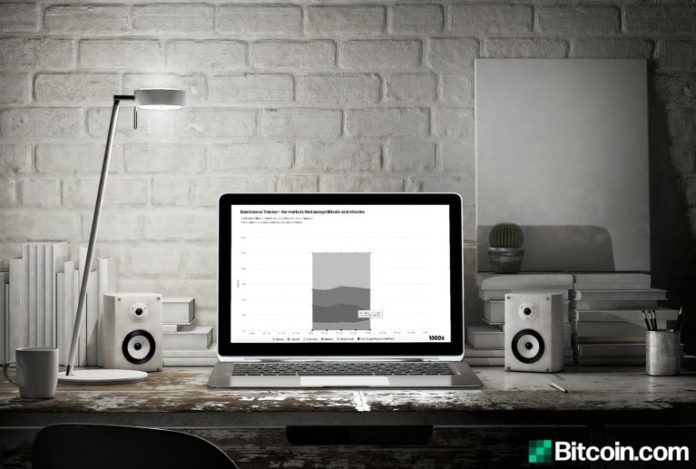 2019 was an interesting year for darknet markets (DNMs) and a number of marketplaces closed for a variety of reasons. Despite the closures, crypto payments on DNMs doubled for the first time in five years. Moreover, statistics from the blockchain analytics provider 1000x Group show digital currencies like bitcoin cash (BCH) have joined BTC’s dominant role within the deep web.

There’s been a number of reports on DNM usage last year and action on the invisible web continues to be interesting in 2020 as well. Just recently, the blockchain surveillance firm Chainalysis published a report that showed DNM payments doubled for the first time since 2015. Not only did the value of BTC sent to DNMs increased by 70%, but Chainalysis also noted that DNMs will likely accept cryptos with a focus on privacy like monero (XMR).

News.Bitcoin.com looked further into darknet payment statistics by leveraging analytics from the provider 1000x Group between January 7, and February 4, 2020. 1000x Group’s dashboard shows data from 15 different markets and ten of them accept BTC only. This includes markets like Silk Road 3.1, Hydra, Wannabuy RDP, Sipulimarket, Escobay, and Joker’s Stash. The DNM Monopoly accepts monero (XMR) only and during the four-week time span, there were four DNMs that accepted coins like BCH, LTC, and XMR in addition to BTC. The four DNMs included Cannazon, Empire, Darkbay, and Apollon. However, the darknet market Apollon allegedly exit scammed five days ago.

The four-week time span measured on 1000x Group’s dashboard shows XMR, LTC, and BCH were used on Monopoly, Cannazon, Empire, Darkbay, and Apollon. Monero represented 56% of the payments on DNMs between that time. LTC captured 29% and BCH saw 12% of sales during the time frame ending on February 4. While Monopoly, Darkbay, Empire, and Cannazon all accepted XMR, Darkbay and Empire processed payments in litecoin (LTC) as well.

The marketplace Apollon accepted BTC, XMR, LTC, and BCH during the four-week time span and grew popular due to its multi-coin acceptance. In fact, before Apollon’s alleged departure, the DNM was probably one of the most active markets on the invisible web. Data scrapes from four researchers at the Australian National University (ANU) indicate that Apollon started small, but had since “exponentially grown in size.” Apollon grew larger after Dream Market’s ‘soft’ exit in the summer of 2019. The multi-currency DNM showed 4,500 listings and Apollon admins claimed it had more than 30,000 registered users.

A Private Peer-to-Peer Marketplace, Cashshuffle, Schnorr Signatures, and the Innovative Cryptography Behind Cashfusion

One interesting fact about 1000x Group’s payment data shows the increase of bitcoin cash (BCH) usage between January 7, and February 4. BCH development during the last year has seen a significant increase in privacy methods applied to the coin. Proponents of BCH believe that the peer-to-peer cryptocurrency has even better privacy enhancements than most coins that exist today. During the last year, the BCH ecosystem has seen the basics of Schnorr Signatures added to the chain and the Schnorr protocol was enhanced again during the last upgrade.

In March 2019, Electron Cash developers unleashed the official iteration of the Cashshuffle protocol and so far BCH users have shuffled 209,490 BCH to-date ($94 million). BCH users also saw privacy push in June, when Bitcoin.com launched its peer-to-peer BCH marketplace. Users from all around the world can trade bitcoin cash in a private manner and leverage encrypted chat and a secure blind escrow system.

Beyond all that, BCH has also seen the introduction of Cashfusion, which has given the decentralized asset a much higher set of anonymity. Not only are BCH proponents using Cashfusion, but the privacy-enhancing software is making waves with BTC proponents as well. The creator of Wasabi Wallet complimented Cashfusion after he listened to Mark Lundeberg’s recent interview with Naomi Brockwell and he made some positive remarks about the protocol in another tweet as well.

Typically, the publication Bitcoin Magazine doesn’t cover Bitcoin Cash topics, but the news outlet’s Aaron van Wirdum wrote an objective article on the new privacy protocol for BCH. Not too long after that article, data analyst James Waugh also commended Cashfusion’s privacy advances in a recent Medium post. Waugh disclosed he queried a number of transaction inputs and outputs and realized that it’s “not possible to establish a concrete link” between them. Essentially, Cashfusion in Waugh’s opinion is far more practical than other Coinjoin protocols.

It’s quite possible that the increased use of BCH on prevalent DNMs is attributed to the added privacy benefits BCH offers to everyday users. With 44,737 shuffles using Cashshuffle to-date and close to $100 million transactions shuffled, the protocol has gathered a lot of traction. Additionally, at 94,574 accounts on Local.Bitcoin.com since the peer-to-peer platform’s launch, data indicates there’s significant interest in trading privately. There have also been 2,250 fusions so far using the Cashfusion protocol since November 28, 2019, and there’s been 10,103 BCH fused to-date ($4.5 million).

It’s a shame that a DNM like Apollon is likely out of the picture, as it was the one marketplace that was popular for offering multi-currency support. As time progresses, it’s still quite probable that other DNMs will support BCH going forward, due to all the privacy-enhancing benefits that stem from recent BCH development.

What do you think about the data from DNMs from 1000x Group’s blockchain analytics data between January 7, and February 4, 2020? Do you think the addition of things like Local.Bitcoin.com, Cashshuffle, Schnorr Signatures, and Cashfusion is the reason why BCH use on DNMs saw increased exposure? Let us know what you think about this topic in the comments section below.

Disclaimer: This article is for informational purposes only. It is not an offer or solicitation of an offer to buy or sell, or a recommendation, endorsement, or sponsorship of any products, darknet markets, services, or companies. Bitcoin.com does not provide investment, tax, legal, accounting or any advice. It has also been noted in the report above that the DNM Apollon is accused of exit scamming and readers should be aware of that situation. The data determined in this article reflects payments on February 4, 2020 and the four weeks prior. Neither the company nor the author is responsible, directly or indirectly, for any damage or loss caused or alleged to be caused by or in connection with the use of or reliance on any content, goods or services mentioned in this article.