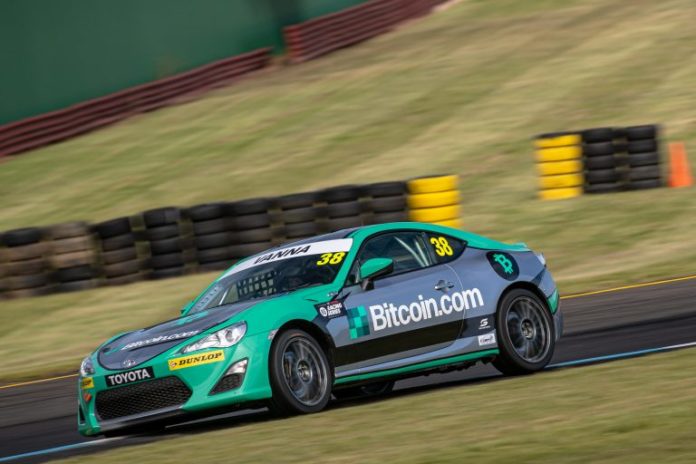 Luke Vanna and the Bitcoin.com car are competing for top honors in the Australian Toyota 86 Racing Series. Sports partnerships like this can introduce cryptocurrency to new audiences as well as attract more businesses to join the ranks of the many merchants already accepting bitcoin cash across the country.

This weekend, Luke Vanna will be competing in a car exclusively branded with Bitcoin.com’s logo and colors in the final round of the Australian Toyota 86 Racing Series at Newport. The Australian racer currently sits fifth in the championship rankings, and could potentially move into the top three this weekend with 300 points up for grabs. He continually places high in Australian racing ranks, and maintains a steady social media following. These factors present him as a great ambassador for Bitcoin.com’s effort to advertise to new markets.

Over the course of 2019, Luke has been helping build the Bitcoin.com brand across Australia at various race events on the Gold Coast and in Melbourne. He has participated in on the ground promotions where he meets people at public events, and promotes Bitcoin.com through his 16,000+ Instagram fanbase. Additionally, the racer has recently secured the services of the Norwell motorplex to offer attendees the chance to win a prize of a day’s training session at the world class motorway, with Luke being the trainer for the session. “What a privilege it is to be partnered with a global brand like Bitcoin.com. I am looking forward to helping reach the brand across the millions of motorsport race fans here in Australia and throughout Asia,” said Luke Vanna.

The Australian racer has organized events where he interacts with racing fans and introduces them to the world of crypto. At these events, Luke helps fans install the Bitcoin.com Wallet app, and shows them how to add bitcoin cash and begin using it. He has also worked with Bitcoin.com marketing officials to promote BCH to the vendors at the track, encouraging them to accept the cryptocurrency as payment. He’s helped introduce the company to hundreds of thousands of television viewers who watched him during the races with his Bitcoin.com branded car.

Bitcoin Cash Is Skyrocketing in the Land Down Under

Australia is one of the top global hotspots in terms of bitcoin cash adoption. A recent report showed that the number of BCH Australian retail transactions throughout the months of September and October 2019 outpaced every other digital asset by a wide margin. One reason for that is the high concentration of businesses accepting bitcoin cash payments compared to most places around the world. Another cause for the successful BCH adoption rate is the strong and active local community, as evident by hosting what was probably the world’s biggest Bitcoin Cash conference yet in Townsville, North Queensland in September. “Bitcoin.com is excited to expand our marketing in Australia in this partnership with Luke Vanna. Seeing the interest among new customers we are looking to innovative means to reach them, and meeting them wherever they are,” explained Bitcoin.com CEO Stefan Rust. “Bitcoin cash adoption is skyrocketing in Australia, with 92% of all cryptocurrency retail transactions. Bitcoin.com is committed to expanding the vendor reach for bitcoin cash, and partnerships like this one with athletes and racers in non-traditional locations will only attract new merchants to join the existing 200 BCH accepting merchants across Australia, not to mention users looking to spend their BCH with those merchants seeing value in this trustworthy, reputable payment source.”

What do do you think about Bitcoin.com’s endorsement of an Australian racing car driver? Share your thoughts in the comments section below.

Playing online casino games can be a very fun and interesting hobby. This is especially if you choose to play...