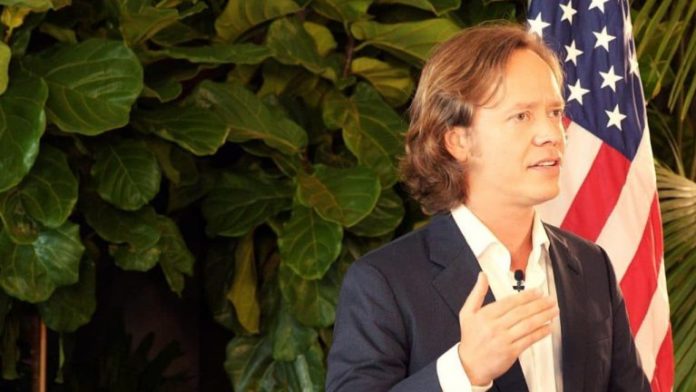 Blockchain entrepreneur and former Disney child actor, Brock Pierce, is running for President of the United States this election. Pierce announced he was running during America’s Independence Day celebration on July 4, the same day Kanye West revealed his candidacy. Pierce is an advocate of technology and cryptocurrencies and he wholeheartedly believes “entrepreneurs are essential to the rebuilding of this nation.”

On July 4, 2020, Brock Pierce, the child actor who starred in the classic Disney film the “Mighty Ducks” is running for President of the United States this election. Pierce is also a serial entrepreneur who shook up the virtual gaming industry as a young adult, and has continued his career bolstering cryptocurrencies and blockchain technology.

News.Bitcoin.com spoke with Pierce in a private conversation back in September 2015. At the time Pierce told our newsdesk:

Satoshi gave us a gift but Bitcoin Stakeholders must continue to nurture and develop it. Disruptive technologies like the Internet and Bitcoin don’t get un-invented.

In Pierce’s 2020 presidential candidacy announcement video, he explains that he is a “staunch supporter of entrepreneurs and small businesses, he understands what it takes to build a business from the ground up.”

Pierce says that Americans need to embrace a future filled with technological advancements and says he can help guide the country toward 21st-century technology practices. The serial entrepreneur explains that he was a child actor as well and notes that he isn’t a “perfect” human and that his “battle scars” have given him fortitude.

The U.S. presidential candidate also leverages discussions involving Covid-19 and the recent protests held in nearly every city across the nation. Pierce wants Americans to “convene” and says mantras like “we are all in this together,” “make every voice count” and “Brock the vote.”

The crypto venture capitalist explains his recent philanthropy in Peurto Rico and his website mentions his involvement with “the Bitcoin Foundation and co-founder of EOS Alliance, Block.one, Blockchain Capital, Tether, and Mastercoin.”

Of course, cryptocurrency supporters will enjoy the fact that Pierce bolsters digital currency solutions and blockchain technology. Kanye West, the billion-dollar hip hop artist who is also running for president in 2020 is also considered bitcoin-friendly and has tweeted about the decentralized currency in the past.

The Libertarian candidate Jo Jorgensen is also pro-bitcoin as well, and news.Bitcoin.com recently talked with the first female Libertarian nominee. She said she would do away with certain legal tender laws, bolster cryptocurrency innovation, and free Ross Ulbricht as well.

Cryptocurrency supporters also have John McAfee and Adam Kokesh too, and both of those 2020 candidates support cryptocurrencies on a greater level than Trump or Biden. The presidential incumbent Donald Trump has only mentioned bitcoin in a tweet and has yet to address the subject on any level.

The presumptive Democrat candidate Joe Biden also hasn’t addressed digital currencies at all during his campaign. The only other pro-bitcoin candidate was Andrew Yang who dropped out a few months back, after his support was significantly lacking.

Seba, a Switzerland based bank, is proposing a Bitcoin valuation model that places its fair value at $10,670. At this...