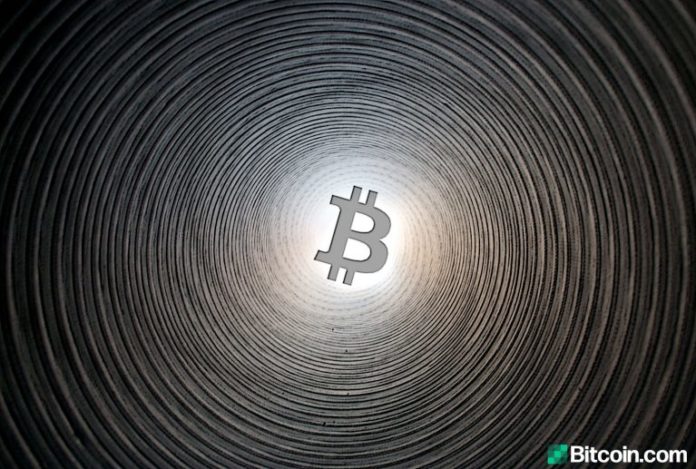 As the bitcoin halving approaches, crypto-mining ‘death spirals’ and miner capitulation have become prominent topics among digital currency enthusiasts. Despite the trending discussions, Coinshares head of research Christopher Bendiksen published a study that says “[bitcoin] mining death spirals do not actually happen in real life” and the speculation is a “highly theoretical edge case.”

After approximately 210,000 blocks are mined on BTC’s blockchain, the network’s block subsidy halves and after May 13, BTC miners will get 6.25 coins instead of 12.5. The halving event happens roughly every four years and the upcoming one, in particular, has caused crypto enthusiasts to speculate on what will happen after the event. Moreover, the recent covid-19 outbreak has caused economic calamity worldwide, as cryptocurrency prices were largely affected by fears of a looming recession.

Because of these two factors combined, crypto speculators and haters think that miners will be “doomed” after the halving and there will be massive miner capitulation. A few individuals and headlines have called the theoretical event a crypto-mining ‘death spiral’ and people assume BTC miners will face catastrophe. However, a recent research study from the firm Coinshares disagrees with this argument and the company’s head of research called the fears “highly theoretical edge cases without any historical real-world precedent.”

In the report called “Why Bitcoin Miners Will Keep Mining,” Christopher Bendiksen talks about how current BTC prices are down more than 50% from the 2020 highs. The researcher details that this means miners have lost 50% of their income and a few “high-cost producers will now be unprofitable.” “When miners turn cashflow negative they will turn off their gear and hashrate will fall,” Bendiksen said. News.Bitcoin.com recently reported on how the hashrate had fallen from the 136 exahash per second (EH/s) high at the end of February, to 75EH/s after the market rout on March 12. The close to 45% hashrate reduction caused the network’s difficulty adjustment to drop to the second-lowest point in history. Bendiksen’s report discusses how the difficulty adjustment algorithm (DAA) is a key element within the BTC network.

In the death spiral scenario, Bendiksen stressed that some people believe that a big enough hashrate drop would slow down block times and eventually “grind the network to a halt since no new blocks are mined.” “This, in turn, will cause prices to drop further causing more miners to shut down until no one is left mining and the price hits zero,” Bendiksen wrote. The Coinshares head of research, however, doesn’t think this situation is plausible in the real world and thinks it only lives in people’s theoretical discussions. Coinshare’s report is also similar to the question answered by bitcoin researcher and evangelist, Andreas Antonopoulos, who discussed mining death spirals on Youtube. “Part of the reason that’s unlikely to happen is that miners have a much more long-term perspective,” Antonopoulos noted in the video.

The Coinshares researcher also explained how in a rare, edge-case scenario it would take an awful lot of factors like gaming the DAA with precision and dumping on market prices at the same time. “In real life though, markets don’t move like that,” Bendiksen’s report highlights.

“On top of that there are operational concerns on the part of miners that prevent shutdowns on such rapid timelines,” Bendiksen wrote. “Powering down a several hundred-megawatt mine is not a matter of pulling a socket plug — you would risk severely damaging the local grid. Moreover, many miners have offtake agreements that mandate that they continue their draw for as long as they are able to pay their contracted bills. The point is: even when bitcoin prices significantly fall (which happens pretty much every year) or the mining reward is halved (which happens at predetermined time intervals), the physical and operational realities of the mining network are such that drawdowns in hashrate take time,” the report states. Bendiksen’s research further notes:

In practice, hashrate reductions are therefore always smoothly caught by the dynamic difficulty adjustment and block frequencies never get anywhere near ‘crisis levels’ (whatever that even means).

Bendiksen and Coinshares believe that the network was designed to handle these exact situations and they are confident things will be fine going forward. “Because of the design choices we’ve explained above the mining network has never failed to produce blocks. The difficulty has reset downwards many times — sometimes dramatically as the result of a pullback in price (the November/December 2018 is an excellent example to study), but never has the network ground to a halt or even come anywhere close to it,” Bendiksen’s report concludes.

What do you think about the Coinshares mining report and death spirals? Let us know in the comments below.

Bitcoin Network Activity Has Plunged, What is Going On?

The crypto market is recovering from the price drop earlier this month, yet the daily number of Bitcoin transactions continues...