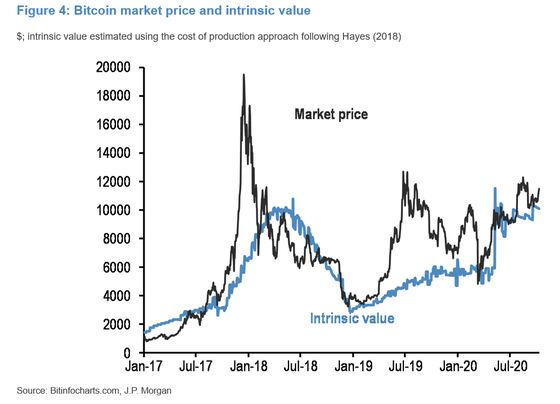 Bitcoin Is Facing Down “Modest Headwinds” in the Near Term

Bloomberg Quint reports that JP Morgan analysts are currently bearish on Bitcoin. Citing a research note released recently, the firm noted that the asset faces modest headwinds in the short term” based on an analysis of bets in the futures market and an estimate of the cryptocurrency’s intrinsic value.”

The indicator shows that there may be an “overhang of net long positions.” It wasn’t clarified if the firm was looking at the CME futures data or non-U.S. based exchanges such as BitMEX, ByBit, and others. It may be a CME futures analysis as the funding rate of BitMEX, ByBit, and other of these platforms are slightly in the positive, suggesting a balance between short and long positioning.

JP Morgan analysts added that the price of Bitcoin is about 13% higher than the “intrinsic value.” This value is derived from the cost of production for BTC, meaning how much it costs to buy one coin.

“The JPMorgan strategists said they calculated an intrinsic value by effectively treating Bitcoin as a commodity and looking at the marginal cost of production.”

The analyst thinks that the cryptocurrency will hit a price of $50,000 and beyond in this market cycle.