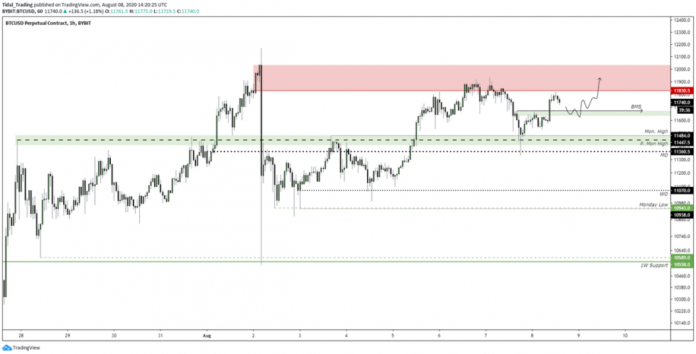 Bitcoin has been caught in the throes of an extended bout of sideways trading ever since its rejection at $12,000 last Saturday.

This has caused the cryptocurrency to see waning trading volume – which may be the result of traders shifting their focus towards small and mid-cap altcoins.

As for where the benchmark crypto may trend next, one analyst is cautioning against expecting anything too exciting in the near-term.

He believes that Bitcoin will likely trade sideways for roughly two weeks before it is able to lift off and start a new leg higher.

At the time of writing, Bitcoin is trading up just over 1% at its current price of $11,750. This is around the point at which it has been trading at throughout the past few days.

Bears have laced the region between $11,800 and $12,000 with significant selling pressure, and each venture into this area has resulted in firm rejections.

If Bitcoin is to surmount this in the near-term, there isn’t much resistance until it reaches $13,000.

One analyst explained in a recent tweet that he expects BTC to start slowly chipping away at this supply zone in the near-term.

“BTC: Nice S/R flip at a confluent level yesterday. 1H MS broke to the upside. Want to see $11.6k hold and then price move up to chip away at the 4H supply again. Still bullish.”

Analyst: BTC May Consolidate for Weeks Before Starting Next Leg Higher

While speaking about the cryptocurrency’s ongoing consolidation phase, one analyst who forecasted the recent rally from $9,000 to $12,000 explained that he expects it to trade sideways for a couple more weeks before taking off.

“I’m a dip buyer if one occurs around the 15th of August give or take a few days, initial thesis looks promising. Until then I expect we remain in consolidating range/structure before the next larger price expansion and continuation by the 19/20th,” he explained.

Once Bitcoin does break above this near-term resistance it is currently facing, its next leg higher will likely come about in the form of a violent upswing to $13,000.

Cryptocurrency adoption is growing rapidly in Slovenia. More than 1,000 locations in the country now accept cryptocurrency payments, including cafes,...