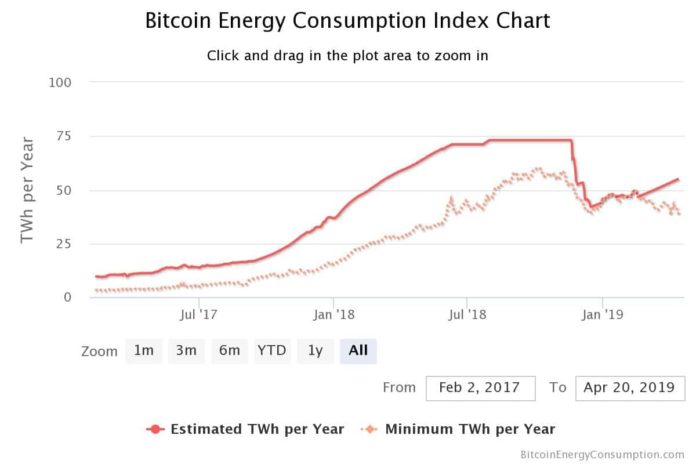 Bitcoin functions through a process known as a consensus mechanism. To put it simply, thousands of computers retain the Bitcoin blockchain in its entirety in duplicate. Each of these PCs, also known as nodes, compete to solve the proof of work algorithm. The one that completes the equation first adds the next block to the blockchain. The node who adds the next block receives a BTC reward for their efforts. Currently, this reward is 12.5 BTC.

As Bitcoin gains popularity, the number of miners on its blockchain increases. A recent report places the number of active miners just north of 300,000. You can expect this number to increase as Bitcoin scarcity grows.

To put this massive consumption into perspective, if Bitcoin was a country, it would rank 66 out of 195 in terms of energy usage. You could power 4,892,381 US households with that much electricity, according to the most recent Digiconomist statistics.

The same statistics show that Bitcoin accounts for 0.24 percent of the world’s total electricity consumption. That’s approximately 144,760,846 KWh in usage over the last day. The world’s first crypto also creates an annual carbon footprint of 26,248 kt of CO2.

While this level of energy consumption sounds troubling, it’s just a splash in the bucket when you consider future growth. Bitcoin mining is on the rise. Last year, the network saw a 413 percent increase in electricity consumption globally. This increased network activity raises the hashrate. In turn, the network difficulty level increases.

This difficulty increase could push future Bitcoin transaction energy usage levels from 478 kWh per transaction today, all the way to 900 kWh by the end of the year. These concerns have led to some individuals pushing for innovative and advantageous solutions.

One solution is green energy mining operations. One such operation came to light in February of this year when it was reported that Plouton Mining intends to create one of the largest solar-powered Bitcoin mining facilities in the world in California’s Mojave Desert. The operation would take advantage of the fact that the Mojave Desert is the 12th hottest place in the world.

Discussing the decision, Plouton Mining’s CEO, Sammy Del Real, explained how solar powered mining facilities benefit everyone. He described how electricity costs are a major “barrier of difficulty that everyone faces.” The team seeks to utilize their newly acquired 50 acres of desert land to make their concept a reality.

When discussing green energy Bitcoin mining projects, there’s much to celebrate. According to a recent report published by the research firm Coinshares, renewable energy mining operations are on the rise. The report estimates that around 78 percent of all Bitcoin’s electricity usage comes from renewable sources.

This report also shows the migration of miners over the last two years towards more renewable-friendly countries. The report reveals an influx of miners leaving China for the US, Iceland, Russia, and Canada. All of these countries offer more green energy alternatives to potential miners seeking large farm setups.

Another strategy being contemplated by the Bitcoin community is changing from the current PoW consensus mechanism into another option. One such option is the proof of stake (PoS) algorithm. This consensus mechanism doesn’t require computers to compete against each other to solve complex and computation heavy equations.

Instead, nodes are users staking their tokens. In this system, nodes verify the blockchain using their staked tokens as collateral. If a node acts honestly, they are rewarded with more tokens. When a node acts maliciously, they forfeit their tokens.

This consensus mechanism is growing in popularity and is already in use by a number of major cryptocurrencies. Interestingly, Ethereum’s founder, Vitalik Buterin, announced that the ETH blockchain will also update to a PoS system sometime before 2021.

It’s true that switching to a PoS system greatly reduces Bitcoin’s required energy consumption, but there are many other concerns that would need to be addressed prior to this change ever taking place. But first, you must understand the dynamics of the Bitcoin community.

Before any changes can occur in Bitcoin’s network, a consensus occurs within the mining community. Here in lies one major obstacle that PoS proponents would need to tackle in order to alter Bitcoin’s code. Bitcoin miners spent billions of dollars on powerful ASIC mining chips. This expensive hardware would be useless if the PoW algorithm didn’t exist.

Miners have been resistant to any changes that alter what many in the past consider as Bitcoin’s doctrine. In 2017, the entire Bitcoin network went on the defensive while discussing whether to increase the block size 1MB. In the end, the argument ended up with the hard fork formation of Bitcoin Cash.

There are some technical concerns that PoS systems need to address as well. One such concern is a long range attack. In this scenario, an individual uses a combination of old keys, with a privately mined double-spend attack chain, to pull off a sizable heist. The attack was described by Buterin in his recent PoS analysis. This type of attack is not possible utilizing a PoW algorithm.

There is much at stake when discussing altering Bitcoin’s code. Bitcoin’s blockchain currently is the safest and largest in the world. This security is what maintains faith in Bitcoin as the top cryptocurrency globally. The PoW algorithm, although wasteful, is a time-proven concept. Consequently, you are more likely to see a push towards renewable energy mining facilities instead of changing Bitcoins coding.

So, What’s the Solution?

Unfortunately, the community hasn’t come up with a tried-and-tested solution to Bitcoin’s energy problems. The rise of green energy initiatives, though, bring hope that, as Bitcoin hits the mainstream, its energy critiques will be a thing of the past.

The post Bitcoin Mining Energy Usage: The Good, the Bad and the Future appeared first on CoinCentral.

France wants the EU to adopt its “new and innovative legislation” with the idea of “creating trust” (in a trustless...