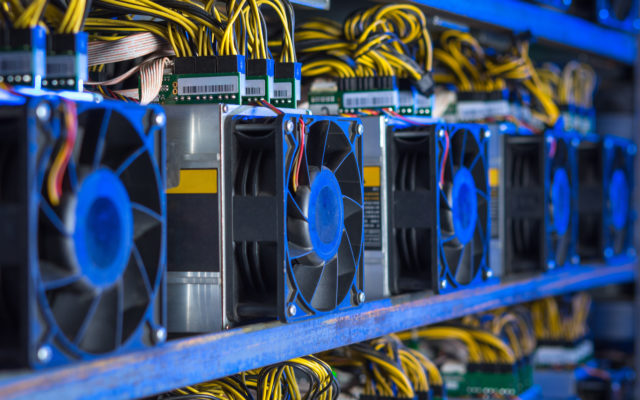 The economic fallout from the Coronavirus is starting to be felt across the world. China’s economy has been the hardest hit but contrary to wider market movements, bitcoin mining stock is rising.

Bitcoin Mining Stock Surges
According to a report from local media outlet 8BTC bitcoin mining hardware giant Canaan has seen its stock prices rally in recent weeks.
CAN stock rallied over 80% yesterday topping $8 according to NASDAQ as over 11 million shares traded hands. The Chinese bitcoin mining firm went public in November becoming the first of the ‘big three’ Chinese bitcoin miner makers to float on US markets.
Since then performance had faltered with a plunge of over 50% since the IPO dropping prices to an all-time low of $4.31. Analysts believe that the recent resurgence has coincided with bitcoin prices topping $10,000.
Miners have been scaling operations by purchasing newer hardware, possibly in anticipation of greater competition following the halving in less than three months.
The report added that many miners have been phasing out their old hardware which generates higher demand for machines that deliver better hash rates and energy efficiency.
Blockchain and crypto related stocks on markets in the US, Hong Kong and Mainland China, have all been performing well recently as digital asset markets continue to strengthen.
According to Canaan sales director, Chen Feng, hardware prices have been rising due to increase demand due to delayed shipments.
A bitcoin hash rate surge has also been expected as the outbreak comes under control, some manufacturing industries may work overtime to make up for the two week production break.
Rallies in stock prices for bitcoin related companies are also expected as the halving nears and market momentum continues.
Economic Slowdown
The Coronavirus outbreak has disrupted Chinese economic output and Alibaba Group’s CEO Daniel Zhang has warned of a possible ‘black swan’ event that could impact the global economy.
According to reports demand for goods and services have declined, and the delay of the workforce getting back to work could further hinder economic growth.
The Washington Post added that the ‘financial hangover’ from the outbreak could last for months even after the virus is finally neutralized.
According to Capital Economics in London the epidemic’s after effects will probably cause the global economy to shrink this quarter for the first time since the depths of the 2009 financial crisis.
This is all coming at a time when central banks are scrambling to bolster their economies by flooding financial markets with newly minted money.
Will bitcoin prices benefit from a global economic slowdown? Add your comments below.

In a globalized world where labor follows capital, the remittance industry has been growing constantly in both volume and users....