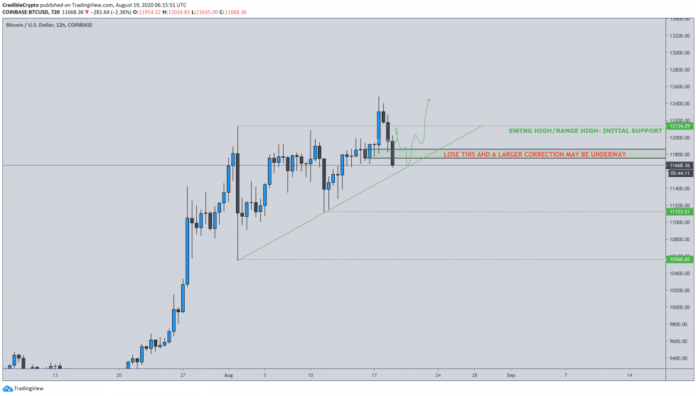 Bitcoin fell towards $11,500 on Wednesday, a move that followed its brief rally above $12,000 earlier this week.

The correction appeared as a testament to profit-taking behavior. Traders decided to liquidate their long positions following a supersonic intraday rally, thus securing their short-term gains. The so-called selling pressure led the Bitcoin price lower, causing others to panic sell as well.

Technical chartists now expect the cryptocurrency to head further lower into this week. One of them painted a string of dotted horizontal supports that Bitcoin might test in the coming sessions. These levels were near $11,123 and $10,560, as shown in the chart below.

“Lose this level on a closing basis and I expect we go for the dotted green lines and the rest of the market will take a hit too,” the analyst said while pointing to the redded alert on his chart. “Be cautious with current positions. No coin will be immune to this.”

But fundamentals spoke about a different outcome.

Bitcoin plunged in the week that is leading up to the minutes’ release from the U.S. Federal Reserve’s last policy meeting. On Wednesday, they will give specifics on how the US economy is doing amidst the rising number of COVID cases – and whether or not it requires further aid in the form of lower interest rates and bond-buying programs.

Phillip Futures analysts said in a note that the Fed might not launch any new monetary stimulus program.

Nevertheless, they stated that investors would watch the minutes to understand any change in the Fed’s approach to inflation. If the central bank maintains the rates near zero, then it would keep downside pressure on the bond yields and the US dollar.

Decisions such as these have earlier helped safe-haven assets, including Bitcoin. A study conducted by Interdax, a crypto derivative platform, noted that FOMC minutes this year sent the Bitcoin price higher after a week of their release–two out of three times. 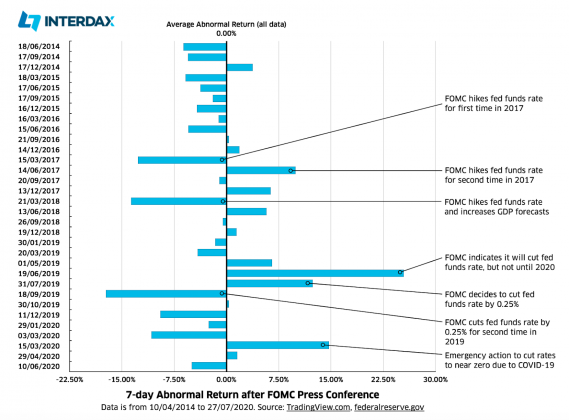 Bitcoin this year surged higher a week after FOMC minutes on two out of three occasions. Source: Interdax

Interdax also noted that the Fed might want to ease its 2 percent inflation target to continue its quantitative easing program. It stated that traders should be on a lookout for any potential signs of more dovishness, adding that “the prospect of higher inflation [shortly] favors bitcoin.”

The macro sentiment allows the cryptocurrency to retest $12,000 as both the US dollar and bond yields eye losses against a dovish Fed statement Wednesday. Gold bulls are making a similar case for the precious metal as they target a close above $2,000 an ounce.

Bitcoin mining hardware maker Bitmain still has a “minuscule lead” over competitor Microbt despite the former’s ongoing power struggle and...