While many fear BTC-USD is entering bubble territory, others are calling for even higher price targets.  Politics aside, there is a clear push for higher BTC-USD prices and it’s creating market uncertainty.

Here are the facts:

Taking a look at the macro trend since the rise post-$1800s, we see clear lines of support along the Fibonacci Retracements: 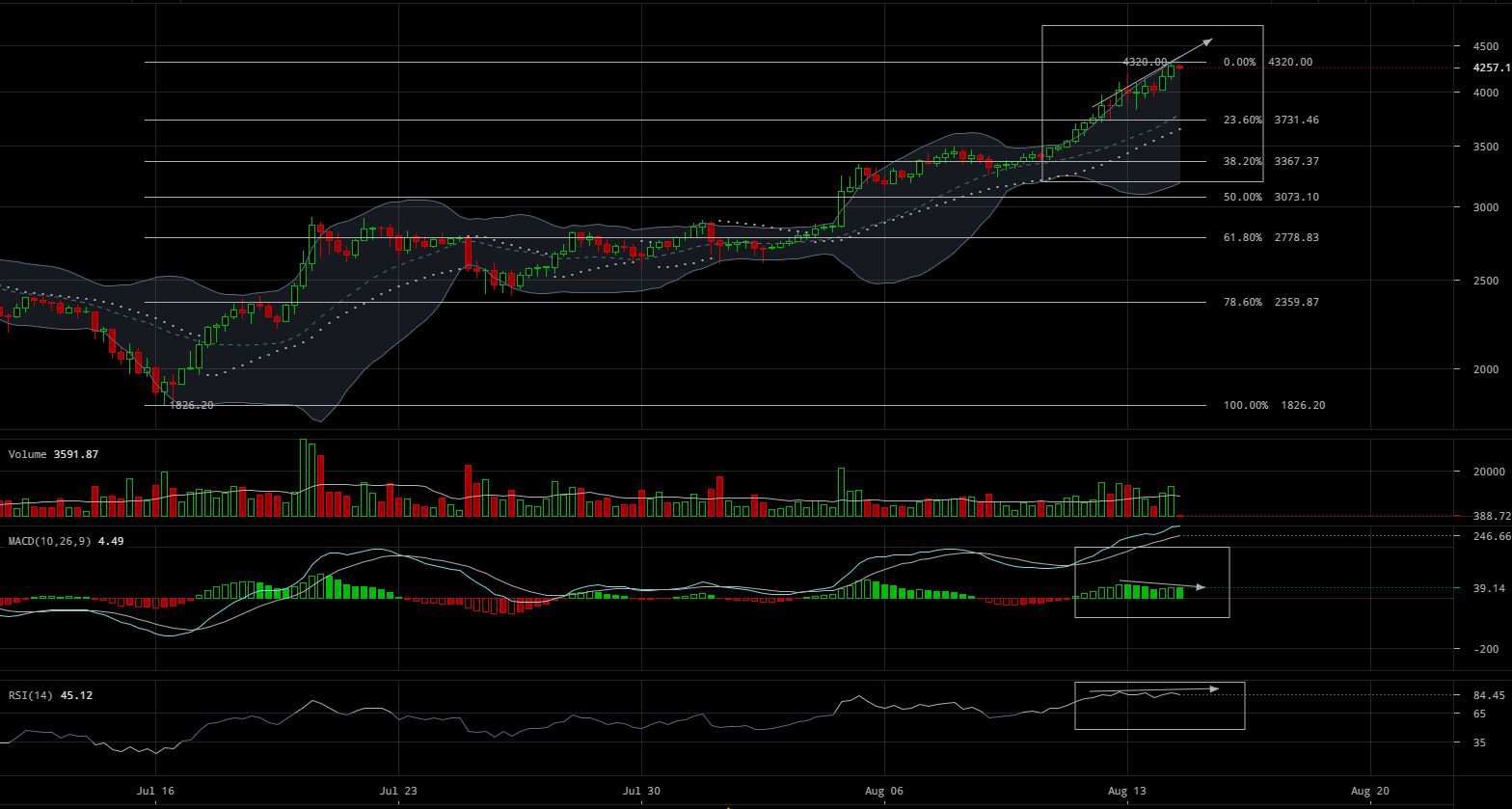 Zooming in on a smaller timescale, we see evidence of a higher push to new all time highs: 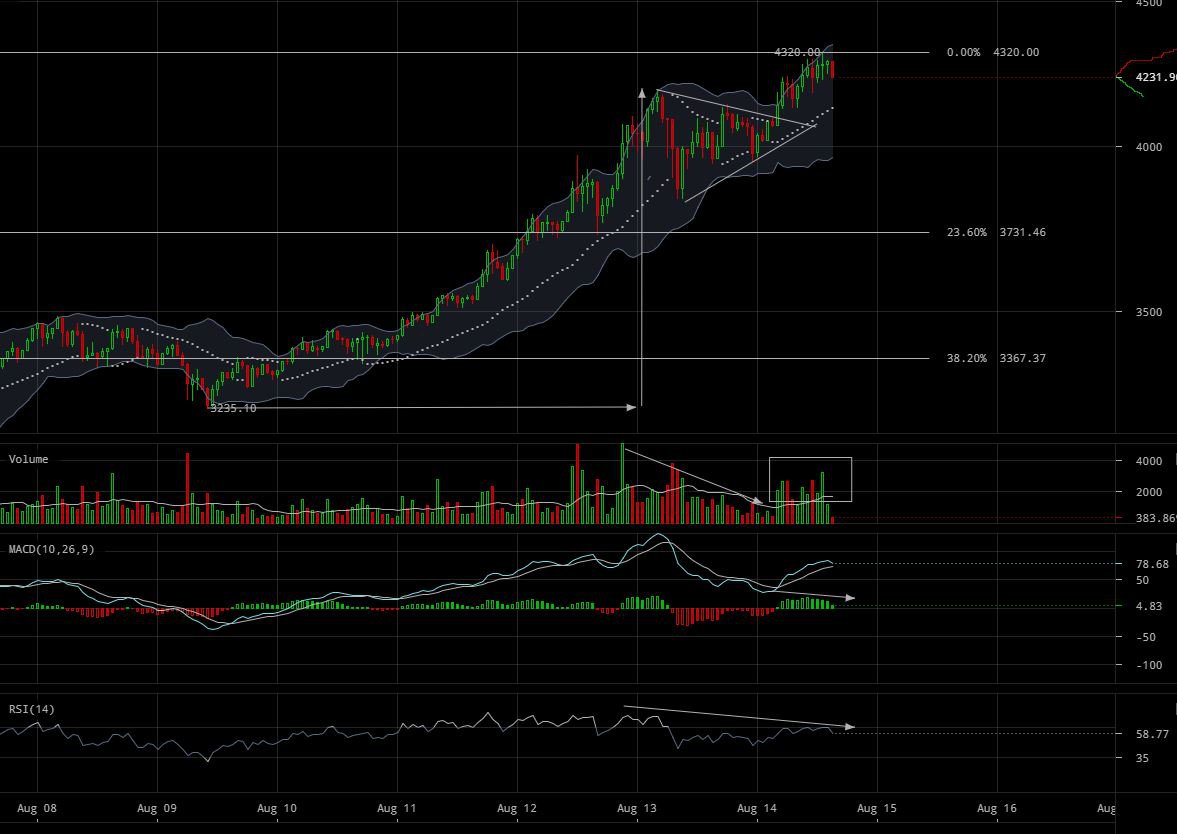 At the top of BTC-USD’s strong run from the $3200s stands a classic bullish continuation pattern called a “Bull Pennant.”  The pennant is characterized by price consolidation within a convergent pattern and has decreasing volume throughout the length of the pennant body.  To accompany this pattern is a 1-hour RSI and MACD that began to consolidate toward its centerline.

At the time of this article, BTC-USD appears to have broken out of this pennant with a sharp increase in volume.  Currently, based on typical price projections for Bull Pennant breakouts, this pennant breakout has a price target of $5000.

Although this is a rather aggressive price target for this bull pennant, there are some considerations on a macro scale that should be addressed and discussed. 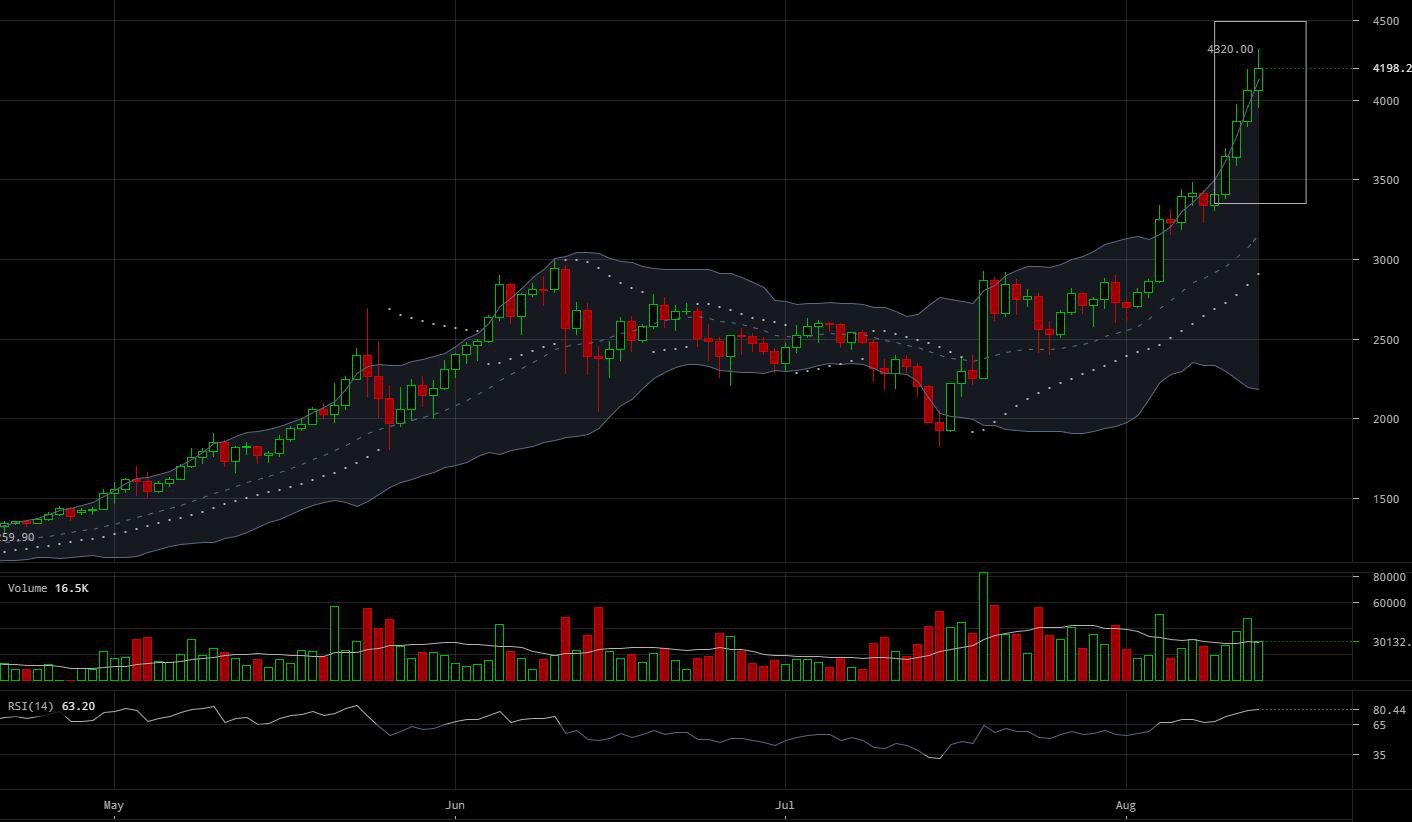 For the fourth day in a row, BTC-USD continues to push outside the Bollinger Bands.  Historically, this sort of push has led to market pullback or consolidation.  Even on high timescales, the current 3-day candle (not shown above) is fully formed outside the Bollinger Bands and shows, on a macro scale, that the market is overbought.  To accompany this push of the Bollinger Bands, a clear decrease in volume is seen on the moving average that shows, since the rise from $1800s, there has been waning bullish sentiment.

While there is a lot of hype surrounding BTC’s recent rise, it is paramount to remain objective and skeptical of market activity and to view the market soberly.  The price target of $5000, on a micro level seems plausible.  However, on a macro level the bullish market appears to have slightly bearish divergence.  To remain a reliable price target, the market needs to see a push to newer all time highs accompanied by increase in volume to sustain the next $800 of price movement.