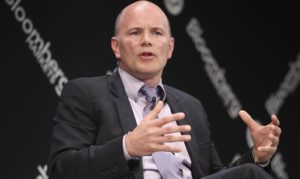 Bitcoin can recover to its all-time highs of $20,000 by the end of this year, Galaxy Digital CEO Mike Novogratz believes.

Institutions To Push BTC To $20k

“We had a big move from $4000 to around $13,500 and I think we’re going to consolidate… $8500 should probably be the low that holds,” he summarized to Bloomberg Canada about current price action.

…And then I think these institutions kind of get excited again, maybe towards the end of the year or hopefully sooner, we push out of that range and we go back to the old highs of $20,000.

The comments further reinforce cryptocurrency figures’ belief in Bitcoin’s short-term price potential, despite its bull run, which began in April and abruptly reversed in recent weeks.

As Bitcoinist reported, political suspicions over Facebook’s Libra digital currency offering spilled over into cryptocurrency in general, with US lawmakers using discussions on Libra to vent scorn over Bitcoin’s perceived dangers.

At the same time, pressure from elsewhere includes renewed plans by India to ban cryptocurrency use altogether. Ostensibly impossible to do with decentralized blockchains such as Bitcoin’s, India’s central bank has nonetheless recommended authorities push ahead with the legislation.

BTC/USD thus remains subdued, on Friday trading at under $10,000 while avoiding moves lower than its recent floor around $9100.

If Novogratz’s forecast seems somewhat optimistic, he is far from alone in the current climate.

This week, digital asset manager and hedge fund Pantera Capital came out with a bold prediction which saw Bitcoin rising as high as $356,000 by 2022.

Based on trend analysis, CEO Dan Morehead said that such price action was in fact reasonable based on previous behavior. By the end of 2019, BTC/USD should thus be trading at $42,000.

“It’s right on the trend line, and I think it’s a good shot that by the end of the year, we hit that, and then if you just extrapolate that line out for another year, it’s $122,000 per Bitcoin and in one more year $356,000,” he told the Unchained Podcast.

Novogratz’s own tone has improved in recent months as Bitcoin recovered. Previously, he eyed $8000 as a reasonable target, something which for him now forms a support level, rather than a resistance level.

What do you think about Mike Novogratz’s Bitcoin price prediction? Let us know in the comments below!

In Argentina, performing international bank transactions can be problematical and expensive, particularly international money transfers. To overcome these issues, Banco...