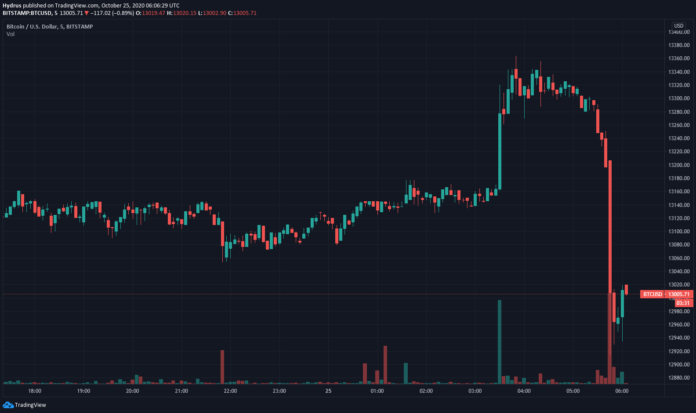 What a chaotic past few days it has been for Bitcoin.

The leading cryptocurrency plunged around $500 in the span of three minutes late last hour as sellers suddenly stepped in en-masse. This came shortly after Bitcoin set a new year-to-date high at $13,350, just under 1% above the previous high at $13,250.

BTC plunged as low as $12,700 on futures exchanges such as Binance during this massive wick lower. The rapid nature of this move either suggests there was a massive market order or there was a cascade of stop losses, resulting in rapid price action to the downside that left traders little time to catch up.

Bitcoin now trades for $12,970 as the market has bounced back slightly from this massive squeeze to the downside.

This move was likely aided by the common lack of liquidity and the increase of questionable movements that take place on the weekend. It is understood that price action on weekends is different than that seen on weekdays due to the different market participants and structures.

Skew.com, a crypto derivatives tracker, reports that millions of dollars worth of positions have been liquidated amid this flash crash lower.

More specifically, $15 million alone has been liquidated on BitMEX alone amid this move lower. This adds to the $6 million liquidated earlier today on the move to $13,350. Due to BitMEX making up just a percentage of this crypto market, likely millions more worth of Bitcoin longs were liquidated amid this flash crash to the downside.

Analysts remain confident as the funding rates of the futures markets remain low. This suggests that longs are not yet overleveraged, meaning that ample  buying pressure could drive Bitcoin even higher without the risk of longs unwinding.