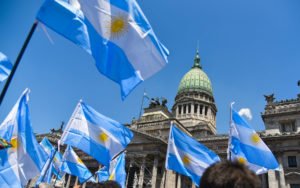 Bitcoin price just reached a new all-time high…in Argentina. Rampant inflation in recession-ravaged countries like this highlights more than ever the need for deflationary currencies like Bitcoin.

You’ve noticed that the price of Bitcoin 00 has gone bananas over the last few days. Whether spiked by coordinated buying, enthusiasm over Fidelity or institutional front-running, the news keeps on coming. And the price keeps on climbing.

Microsoft will be launching the first decentralized infrastructure implementation directly on the Bitcoin blockchain.

EBay is gearing up to accept cryptocurrencies. Bakkt may be approved to launch within the next 10 days by the CFTC. You can even buy your sandwiches in BTC at Whole Foods.

All this institutional investment shows that this latest rally is not retail-driven. Although, with Bitcoin trending on Google searches once again, FOMO is about to kick in. BTC price is going in one direction only for the foreseeable future.

Whether it will break through its 2017 ATH is the question on everybody’s mind, and in one country, it already has.

Bitcoin reached a new all-time high in Argentine pesos. The insane pricetag in Argentina’s local currency just goes to highlight even more the need for a deflationary currency like Bitcoin.

Bitcoin is at all time highs in Argentinian Pesos (ARS). That’s inflation for you lol. pic.twitter.com/ZsoXm7IozI

Of course, Argentina isn’t the only country to have hit new BTC all-time highs. In Venezuela, it’s impossible to track its price in local currency with an inflation rate of over one million percent per year.

But this is a new one for Argentina whose inflation rate at 50 percent per year looks modest when compared to its South American counterpart.

A glance at the trading volume graphs from Local Bitcoins couldn’t be starker. When you see the amount of bitcoin changing hands (in BTC), you’ll notice a small spike this week, but smaller than a few weeks ago–and significantly less than the mania of 2017.

However, when you flip the chart to ARS, the 2017 ATH looks almost insignificant.

The Inevitable Collapse of Fiat

It feels like deja vu. Just four years ago as the now-president of Argentina was running for office, the very same words were spoken. Untamable inflation has always and will always be an issue for countries like Argentina. Reuters pointed out yesterday:

Macri’s bid to win re-election in a presidential ballot in October will likely be closely tied with his government’s ability to rein in inflation that has hammered voters’ wallets and dragged on economic growth.

Finance professor at Babson College Dr. John Edmunds focused his career on Latin American economies. He believes that inflation isn’t the main issue with the Argentine economy. The fact that its financial system only allows for the top 5-10 percent of the population to gain access to credit is more problematic. He says:

They do so many things well except finance, the financial system is exactly the same as it was in 1860. Every 15 years it collapses, you can pretty much set your watch by it… It maintains the flow of capital into the sectors that the upper-class think should have it.

Bitcoin price may be going wild against the dollar and hyperbolic against the peso, but its price isn’t the greatest news here. Bitcoin offers the people of Argentina a solution to their savings getting wiped out by inflation. It also keeps the government out while letting everyone can access it, not just the top 10 percent.

Will Bitcoin price climb even higher in Latin America? Share your thoughts below!

For the crypto industry, attracting the next 100 million consumers to start using tokens as currency is going to require...