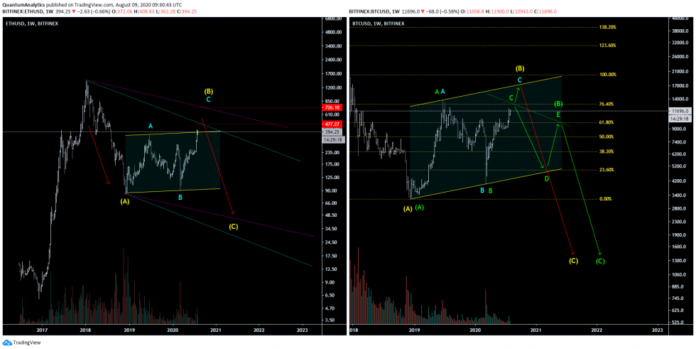 So said analysts at Hong Kong-based Quantum Hedge Fund in their alert published Saturday. The team noted an inherent stretch in Bitcoin’s running uptrend – and how every time it leads to a giant corrective move to the downside. That brought them to $12,500, a level the cryptocurrency could hit in the coming session, only to fall back afterward.

“The price can reach the level of 12500, after which we expect a fast price decline in the impulse wave of the oldest correction model,” said the team led by strategist Jan Janssen. “We recommend looking [at] levels for a short sale and forgetting about continued growth in the medium term.”

Anatomy of an Analysis

In retrospect, the “oldest correction model” that Quntuam referred to pointed to an ascending channel pattern. The hedge fund briefed it via a chart, as shown below.

The image represented Bitcoin, as well as Ethereum, pursuing a downside continuation trend.

Before forming the ascending channel pattern, they were falling. Their technical description pointed to two different outcomes: reversal or extension. That said, Bitcoin could either bounce back to negate the downside continuation trend or continue targeting lower levels to strengthen its bearish bias.

Quantum noted that the latter would happen. Its chart above projected that Bitcoin would surge towards $12,500–or even $17,000– but would eventually give up its gains to test the lower trendline of the ascending channel. Should it happen, the price will fall towards the level anointed as ‘D.’ That is below $5,000.

“We believe that the mid-term dynamics of ETH and BTC prices will be a big disappointment for many people in the next 2-4 months,” the Quantum team said.

The firm further confirmed that it is already liquidating their holdings for USDT at the current price levels.

“Currently, more than 60% of the volume has been sold at current prices,” it wrote. “The remaining volume will be realized after confirmation of the medium-term bearish pattern, or at logarithmic levels: for ETHUSD 470-730; for BTC 12500-17300.”

Other Bitcoin prediction appeared contradictory to the one Quantum shared. They focused on the plethora of macro fundamentals that envisioned a higher demand for Bitcoin in the future.

Inflation worries led by the US Federal Reserve’s open-ended bond-buying program, coupled with near-zero interest rates, have made US Treasuries–the safest hedging instrument– more expensive. Yields on the benchmark 10-year US bond dipped is near 0.5 percent. Meanwhile, inflation-adjusted Real Yields fell to minus 1 percent.

The lack of attractive returns prompted investors to look into riskier assets. As a result, the Wall Street indexes trended higher during the second and third quarter despite a concerning economic outlook. Meanwhile, the next-best safe-haven, gold, established its lifetime high at $2,075 an ounce. 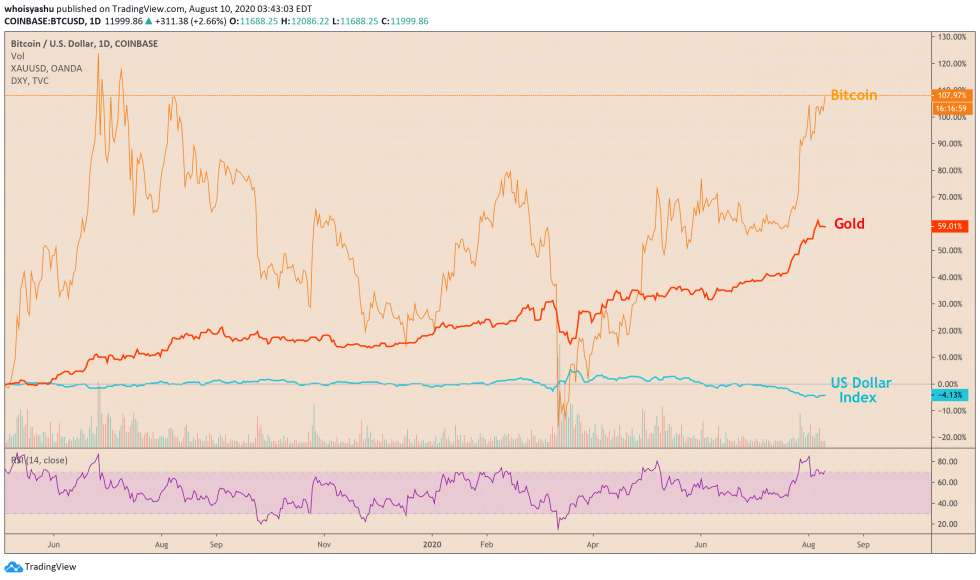 Bitcoin, Gold, and US Dollar Index performance in 2020. Source: TradingView.com

Bitcoin also surged higher on speculations of becoming “digital gold.” The cryptocurrency logged its yearly top above $12,000 last week on rising demand. Jack Dorsey’s Square reported 600 percent YoY in revenue. It sold a total of $875 million via its CashApp, about six times higher the amount in the same period in 2019.

Marty Bent, the editor-in-chief of Bitcoin-focused daily newsletter, Marty’s Bent, noted that the fall in the US dollar index (DXY) pushed investors into the crypto market.

“The DXY is cratering,” he said. “Bitcoin, gold, and stocks are rocketing. Corporations are diversifying away from cash and into bitcoin and gold. CashApp just had a breathtaking quarter of bitcoin sales.”