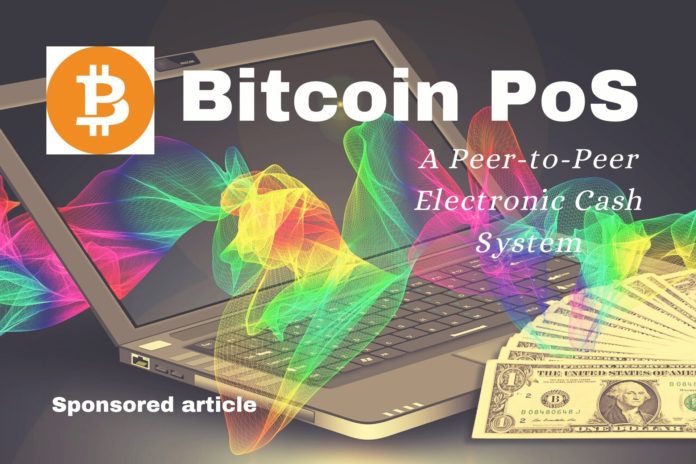 Bitcoin has been here for more than a decade and continues to dominate nearly 66% of the overall cryptocurrency market. However, the proof-of-work (PoW) consensus mechanism for Bitcoin core blockchain makes it susceptible to complete miner domination through 51% attacks.

Besides, the latest Bitcoin halving has reduced miner rewards while increasing the network complexity which ultimately results in higher mining costs. At the same time, the lack of scalability of the BTC core network has become a major issue for its fans.

A team of developers is working on bringing a new evolution in the Bitcoin Technology Bitcoin Proof-of-Stake. This peer-to-peer electronic cash system aims are combining the world’s strongest digital asset with a more reliable, scalable, efficient, and flexible Proof-of-Stake (PoS) consensus algorithm.

Bitcoin PoS aims to update the Bitcoin core blockchain network for the future by bringing new advances in addition to everything that the existing Bitcoin core network has to offer.

With the Proof-of-Stake (PoS) infrastructure, users can stake their Bitcoin tokens and earns passive income in the form of rewards. Unlike the PoW model, the Bitcoin PoS would require minimal hardware and fewer electricity costs compared to Bitcoin mining.

To participate in the Bitcoin staking process, you just need to follow the four simple steps.

Bitcoin PoS brings a number of benefits making the overall network performance more rewarding, faster, and facilitates real-life digital currency payments. Below are some of the benefits of Bitcoin PoS:

As said earlier, Bitcoin PoS aims to create a faster, efficient, and scalable output of the Bitcoin blockchain to meet future challenges. It aims to become a world-class financial instrument in the crypto market.

It plans to do it by combining steady growth with consistent earnings while continuing to innovate with time.

Bitcoin jumped above $9,500 in midday Thursday trading. The gains sustained on safe-haven bids Friday as tensions between the U.S....