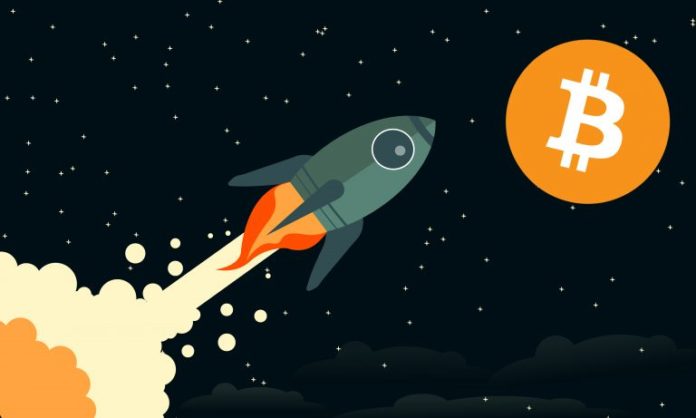 Bitcoin hit $7,600 on Thursday, its highest level yet since crashing in early March. The cryptocurrency climbed more than 10% during the last 24 hours spurred by the return of leveraged money.

Bitcoin plunged 27% on March 12, otherwise known as ‘Black Thursday, as global financial markets reeled from effects of the coronavirus pandemic.

Experts have targeted a break above $8,000 as a key indicator for a bull run. But after the Thursday pump, BTC got rejected a hair, suggesting this “was not a normal bull flag.” The flash pump above $7,700 quickly lost momentum.

Since mid-March, BTC has appeared to move in sync with riskier assets like stock markets, rising when they rise and falling when they fall. U.S. equities gained on Thursday fuelled by hopes sections of the economy may soon open.

There are other factors in support of a bitcoin rally, however. Breaking a previous resistance level of $7,600 for the second time this month might be an indicator that a pre-halving surge is likely. The bitcoin block reward halving is just over two weeks away. Investors appear to be taking positions for an upswing in the price of BTC, if history is acting as a guide.

In addition, the 14-day Relative Strength Index (RSI) shows the cryptocurrency has yet to enter overbought territory. The RSI for BTC is around 59, far below the key threshold of 70, which signals overbought. A break lower could mean bitcoin falls to around $6,500, another major level of support, say experts.

At the time of publication, the total value of all the BTC in existence exceeds $138 billion. Over the past 52 weeks, the coin has touched a high of $13,796 and a low of $4,106, according to data from coin market capitalization aggregators.

Where do you think the price of bitcoin is headed? Let us know in the comments section below.

The post Bitcoin Soars to Its Highest Level Since Crashing in March appeared first on Bitcoin News.