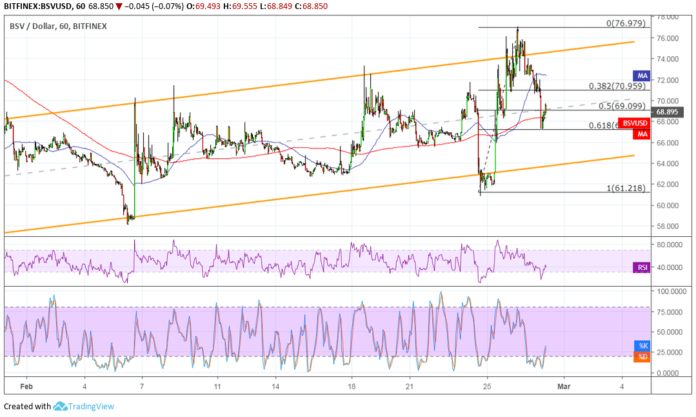 Bitcoin SV continues to trend higher inside an ascending channel visible on its 1-hour and 4-hour charts. Price just bounced off the resistance and has retreated to the mid-channel area of interest.

This potential support zone lines up with the 50% Fib but it looks like price needed a slightly larger pullback to the 61.8% level, which is keeping losses in check so far. An even larger correction could last until the bottom of the channel closer to $65 where more buyers might be waiting.

The 100 SMA is still above the longer-term 200 SMA to confirm that the path of least resistance is to the upside. This suggests that the uptrend is more likely to gain traction than to reverse. The gap between the moving averages is widening to reflect increased bullish momentum and the 200 SMA is holding as dynamic support, too.

RSI just climbed out of the oversold region to signal that buyers are taking the upper hand while sellers take a break. This could be enough to take Bitcoin SV up to the swing high or the channel top around $75 to $76. Similarly stochastic is making its way out of the oversold region to signal the return of bullish pressure. Both oscillators have room to climb before indicating overbought conditions, so bulls could stay on for much longer.

Most cryptocurrencies are enjoying a strong bounce over the past 24 hours, possibly an indication that the earlier climb is set to resume. This was likely spurred by positive commentary from big names in the tech industry such as Apple’s Steve Wozniak and Tesla’s Elon Musk.

This also supports the optimism in the industry so far this month, buoyed by bullish analysts’ forecasts and confirmation that prices have already bottomed out. Traders are looking ahead to a pickup in institutional interest as Fidelity gears up to launch its platform in March.