On Friday, March 10, Bitcoin rose to the highest price in history when the cryptocurrency hit $1,285.74 against the U.S. dollar. Bitcoin trading was born in 2010 when the price was only 6 cents in dollar terms, and the asset has come a very long way since.

There has been lots of debate surrounding the cryptocurrency. Some call it a commodity and others a currency. Most commodities are raw materials or hard assets that owners can hold in their hands or store for safe-keeping. One can only store Bitcoin in a computer wallet via a computer code. One of the most interesting things about Bitcoin is the blockchain technology that records a chain of ownership. Blockchain has many applications for other assets and could revolutionize the back-office function creating economies of scale and decreasing the cost of settling transactions across all assets. The current acting Chairman of the Commodities Futures Trading Commission (CFTC) commented on blockchain or DLT (distributed ledger technology) in January. “DLT may allow market participants to manage the enormous operational, transactional, and capital complexities brought about by Dodd-Frank. At the same time, it may provide regulators with the market visibility necessary to fulfill our mission to oversee healthy financial markets.” The CFTC has designated Bitcoin as a commodity.

Last Friday, the Bitcoin market faced a highly anticipated decision by another regulator, the Securities and Exchange Commission (SEC), which ruled on a rule change that would have allowed for the creation of the first Bitcoin exchange-traded fund (ETF). Gemini sought to list the ETF on the NYSE Arca exchange. The ETF was the brainchild and supported by the Winklevoss twins who are angel investors in Gemini.

Bitcoin holds gains after SEC decision after an initial selloff

As those who trade Bitcoin held their collective breath and waited for the decision from the SEC last Friday, the price of the cryptocurrency rallied to its all-time high. After all, an affirmative nod from the regulatory body would have opened the floodgates for investors to position in Bitcoin via an ETF product. 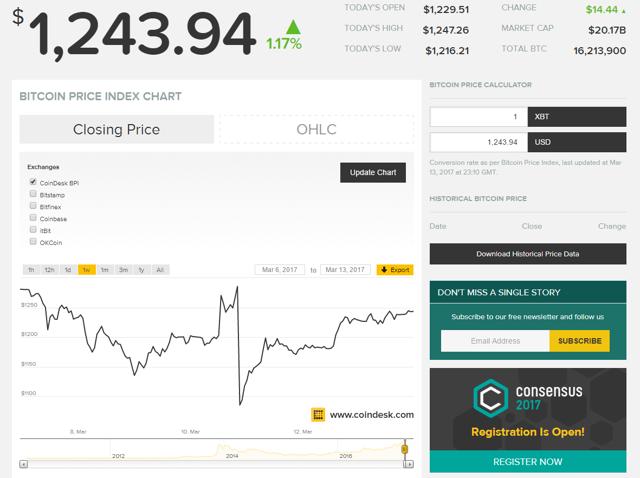 As the price chart over the past few trading sessions highlights, Bitcoin fell to a low of $1,085.33 following the adverse decision from the SEC, a decline of 15.6% over the course of one-hour last Friday afternoon.

The SEC said in their decision that they were unnerved by a market that operates on an unregulated basis largely outside of the United States. They went on to tell the market that the chances for market manipulation are high in the world of Bitcoin at this time. There are currently two other proposals before the SEC when it comes to an ETF product for Bitcoin, but Friday’s decision handed another in a series of bruises to the ego of the Winklevoss twins.

Despite the decision, the reasons that have caused the increase in value for Bitcoin remain strong. As a currency instrument, Bitcoin can float freely and its value comes from supply and demand for the cryptocurrency. While other foreign exchange instruments are subject to controls and manipulation by governments and monetary authorities around the world, Bitcoin is a pan-global means of exchange tool. In nations where currencies are not freely convertible, like China and Russia, the popularity of Bitcoin has soared. Therefore, by Monday, just a few days after the SEC handed down a decision that put an economic bullet into the twins’ dreams of reaching the pinnacle of the cryptocurrency market, the price was right back up above the $1,240 level and trading near last week’s highs. Eventually, there will be a market product that replicates the price action in Bitcoin, but the chances are that those poor Winklevoss twins lost their opportunity last week. It seems like everything they get involved in is a huge winner and at best, they only can capture a sliver of the value.

Another in a series of blows to the ego

The Winklevoss twins reached the height of their fame when they worked with Mark Zuckerberg at Harvard to develop Facebook. While Zuckerberg became a billionaire, the poor twins settled for $65 million in cash and Facebook stock which today is probably only worth a couple of hundred million. The twins argued in a lawsuit that they were the founders of the company and their piece of the Facebook pie amounts to a mere pittance when compared with Zuckerberg’s net worth of which is north of $56 billion.

Money cannot matter much to the twins these days as a couple of hundred million is probably more than both can spend in their lifetimes, but the blow to the ego from the SEC decision has probably sent both into deep analysis wondering why they just cannot get anything to go their way. After all, Facebook has been a sensation that has surpassed almost everyone’s wild dreams, and the future Bitcoin ETF product will likely have a similar result.

A Bitcoin ETF could attract lots of action

One of the biggest problems with Bitcoin is that it is so foreign to the traditional investment community. Investing in Bitcoin requires a certain amount of computer savvy, imagination, and a wallet in one’s computer to store the cryptocurrency. While many millennials have embraced Bitcoin, the nontraditional method of investing in and holding the asset has caused many seasoned investors and traders to avoid it like the plague. Whenever I write a piece on Bitcoin, I always get at least one comment asking why someone should invest in anything that is backed by nothing. The other comments express the same concern cited by the SEC and other regulatory bodies that manipulation is too rife in the market to make it a solid investment vehicle. An ETF product would go a long way towards acceptance of Bitcoin as a trading sardine. Face it, investors and speculators love volatility, and if they can trade an asset that offers wide price variance and trades on a bona fide exchange, it will go a long way to increasing market visibility and acceptance. A Bitcoin ETF product will succeed once the regulators figure out a way to understand the flows in that market and the exchanges are chomping at the bit knowing that the trading volumes and fees will be huge.

Bitcoin at an all-time high

Bitcoin did not fall apart in the wake of last week’s SEC announcement to reject the ETF product offered by the twins. In fact, the price action following the announcement was just another example of another higher low for Bitcoin. 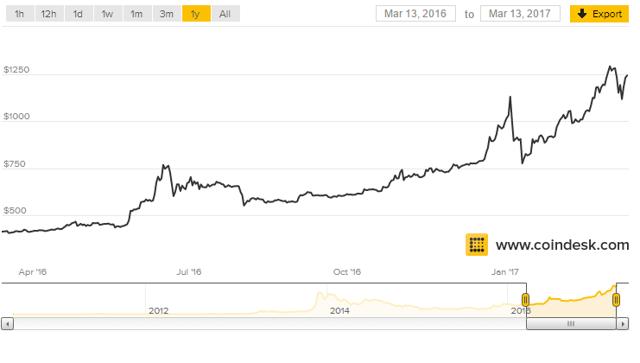 As the chart dating back to March 2016 shows, the price of Bitcoin has tripled and has been making higher lows, and higher highs as more people around the globe embrace a currency or commodity that is simply a function of supply and demand and that transcends the forces of government. In an age where citizens in Western nations are rejecting decades of the status quo as exemplified by the Brexit vote and election of Donald Trump as President of the United States, the rise in popularity of Bitcoin should come as no surprise. Moreover, as individual wealth in China increases, the controlled nature of the currency and exportation of wealth creates the perfect environment for Bitcoin to thrive. For the time being, it could be a case of this week’s highs are next week’s lows for Bitcoin and the SEC decision has little to do with the future popularity and acceptance of the cryptocurrency.

Is regulation of Bitcoin possible?

Regulators are struggling to get their hands around Bitcoin under the pressure of exchanges that smell profits from transaction fees. If the U.S. regulators do not act fast enough, it is likely that a foreign exchange in a friendlier regulatory environment will capture market share and leave the U.S. exchanges in the dust, just like the Winklevoss twins.

The CFTC was correct to label Bitcoin as a commodity. National interests tend to drive currencies, stocks, and bond prices over time which allows regulators to liaise with markets and exchanges to control and monitor flows. However, commodities are a different story given that production occurs in some regions of the world and consumption is ubiquitous. The CFTC regulates commodity prices within the United States and works with other cooperating nations to protect the markets from bad behavior. However, the U.S. regulators do not have the ability to control raw material markets on a pan-global basis, and they concentrate on the activity within the borders of the nation. If someone in the Ivory Coast decided to control and manipulate the price of cocoa, the regulators could not do much. OPEC has been attempting to manipulate the price of oil for decades, but it still trades actively and is regulated by the CFTC when it comes to trading on the U.S. futures market. Bitcoin is a commodity, and regulation needs to come with the full knowledge that what happens away from U.S. borders will be beyond the reach of regulatory bodies.

The SEC ruling last week was short sighted in that their argument was specious. Commodities markets, like Bitcoin, operate largely outside of the U.S. and there are instances where market manipulation occurs. The CFTC is accustomed to regulating commodities and therefore should have the role of guiding the SEC. After all, there are currently Cocoa (NYSEARCA:NIB) and crude oil (USO and BNO) ETF and ETN products that the SEC has approved for trading, and there is little difference between a Bitcoin ETF and those products when it comes to the arguments presented by the SEC.

The chances are that the regulatory body will eventually bite the bullet and approve an ETF product for Bitcoin. The problem for the Winklevoss twins is that they cannot catch a break. They will be left on the sidelines and on the outside looking in, once again, watching others make fortunes while wondering if they just have a dark cloud hanging over their heads.

I have introduced a new weekly service through Seeking Alpha Marketplace. Each Wednesday I will provide subscribers with a detailed report on the major commodity sectors covering over 30 individual commodity markets, most of which trade on U.S. futures markets. The report will give an up, down or neutral call on these markets for the coming week and will outline the technical and fundamental state of each market. At times, I will make recommendations for risk positions in the ETF and ETN markets as well as in commodity equities and related options. You can sign up for The Hecht Commodity Report on the Seeking Alpha Marketplace page.

Disclosure: I/we have no positions in any stocks mentioned, and no plans to initiate any positions within the next 72 hours.